Burning Question: Will We Ever Farm With Draft Horses Again?

According to some draft-horse proponents, draft horses could overtake tractors as the farm tool of choice. 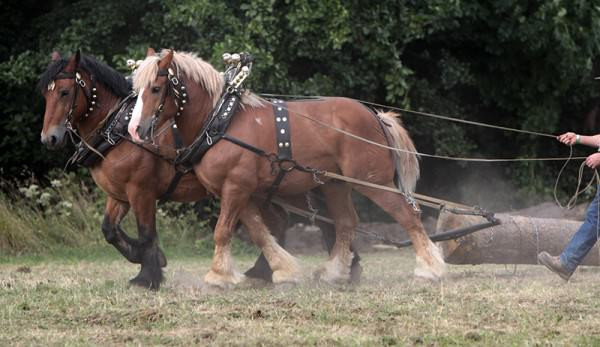 The idea that the majority of farms could, or would, ever return to using draft animals seems absurd at this point, right? Unrealistic, idealistic, not worth putting much thought into into. Well, let me introduce you to a fun tidbit I found while reading Stephen Leslie’s excellent new book Horse-Powered Farming for the 21st Century (Chelsea Green, 2015):

“Over 25,000 farmers do their daily farm work in the United States with horses. As Amish, Mennonite, and Brethren numbers increase, that number is likely to continue to rise. Amish numbers double about every 20 years; Old Order Mennonite numbers double about every 15 years. Some agriculture experts predict that an increasing population of Amish and Mennonites and an aging population of other farmers will result in a majority of farmers using horses within 40 years.”

This quote comes from Michael Hari, CEO of Equicert, a business providing services to horse-powered farms. And admittedly, what it describes would be a little by default, but it’s certainly provocative, no? Curious, I decided to dig a bit deeper.

Who Are The Horse Farmers?

The Amish are arguably our most well-known horse farmers. In 1920, the population of Amish was around 5,000, and is roughly 300,000 today. (Some 85 percent of Amish youth stay in the faith.) It has tripled since the mid 1980s and, indeed, will double again by 2024, according to a study by Elizabethtown College. And though some do use tractors, the Amish still predominantly farm, or at least travel, with horses.

Then there’s the Old World Mennonite population that may be as much as 530,000 in the U.S. today. Even though they haven’t quite doubled since 1997, the populations seem to be growing steadily worldwide, and as many as 17,000 communities still utilize horse power.

Then, of course, I would be remiss to not include the increasing population of young farmers, not connected to one church or another necessarily, who are turning to draft animals for power. These populations are a little harder to nail down, but if Leslie’s new book, with more 60 contributors, is any indication, there are more young horse-powered farmers starting up every yearâ€”hundreds, perhaps. Soon, maybe thousands. The population of people who use draft animals, in other words, is not shrinking.

Again, though not all Amish or Mennonites use draft animals, it seems most still do. And most probably always will. Whether a community adopts tractors or machinery is generally up to the individual group, but the majority of modern technology and machineryâ€”as non-modern as tractors feel these daysâ€”go against the values of their settlement. So although it’s hard to get a pristine number for how many draft animal farms exist, roughly 400,000 farms, including farms who use horse and buggy for transportation, seems to be a fair estimateâ€”and this number is rising. Plus, with more and more â€śEnglishâ€ťâ€”as the Amish call those not of the Amish faithâ€”take on draft horses, the population of horses could presumably rise at an even greater clip.

The amount of tractors in use today in modern agriculture is quite a lot. Some estimates say nearly 5 million tractors are in use in the U.S. That said, actual sales of large tractors and combines over the last few years have decreased considerably. Worth noting, though, are sales of smaller tractors (below 40 hp), as well as two-wheeled walk-behind tractors, which are actually on the rise by as much as 20 percent over the last few years. If horse farms are truly going to outcompete tractor farms then, they’ve got some stiff competition in the small-tractor industry.

Should I Try Farming With Draft Animals?

My answer, in short, is â€śWhy not?â€ť It is technically possible that some day horses could take over for tractors. However, with farmable land shrinking at a rate of 50 acres an hour, the demand for small tractors and small-scale farmers is rising. More people are farming smaller plots, thus more small machinery is necessary. Also, as Leslie himself writes, “Many farms that utilize draft horses also have a tractor or two.” For that reason, tractor farms will likely outnumber horse farms for generations to come.

We can also assume, though, that gasâ€”the finite substance that it isâ€”will inevitably become too expensive to not at least supplement some farm work with more renewable power, like that of a horse, so let’s not rule it out either. A return to horse power could be slow, but it could be coming. Let’s be honest, that wouldn’t be so bad.