Farming & Releasing Butterflies: Is It Justifiable for Happy Events?

People grow butterflies to be released at weddings and similar occasions, but is it ethical and eco-friendly? Are there better ways to help butterflies? 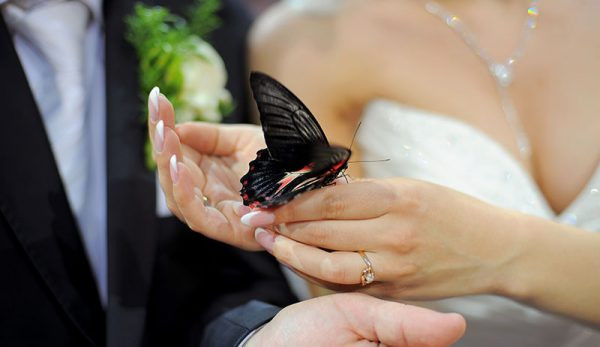 Insects are raised in captivity as pets, as food and as pet food. Some insects are raised and released to be predators on other insects. Others are bred for silk production, and some are kept indoors for decomposing our waste. Some types of insects are raised by labs for research or studied in classrooms by schoolchildren.

At a friendās wedding about 20 years ago, I learned that insects are also raised in captivity just to be set free. As we all eagerly awaited the vows to be exchanged and craned our necks to see the big kiss, we each held a little paper pyramid in our palm, awaiting the signal to open it and release the little treasure it held. A flurry of colorful butterflies took wing. Or tried to. Some of us had duds, and sad looks were exchanged when one or two didnāt move at all.

Most just needed a little more warmup time, and they slowly made their way up and into the sky. Even though it didnāt look quite as magical as we had hoped, the gesture was joyful and hopeful, safer for the environment than releasing balloons and healthier for the birds than tossing rice, or so it seemed.

Releasing butterflies looked like a trend at that time in the late 1990s and has grown in popularity. Farming butterflies could be a viable revenue stream for small-scale growers who are willing to raise this quite unusual livestock. But there are still some concerns about releasing captive-bred wildlife into new environments. Many international and national wildlife advocates warn against the practice.

The reports are mixed about whether captive-bred butterflies released in new environments have created any measurable disturbances in any given ecosystem. However, given our continentās history with invasive species arriving in innocuous little packages, it makes good sense to be cautious about sending insects to places they donāt normally live. The above arguments donāt even touch on concerns about cruelty to animals and the ethics involved in the industry.

The attraction of releasing captive butterflies holds deep cultural significance and could motivate people to care about wildlife. Their winged freedom inspires and uplifts us. Metamorphosis consoles us as we go through life changes. Their ephemeral beauty reminds us of the fragility of life. And in the case of monarchs in particular, their marathon migration feats astound us with their perseverance. But still I wonder, is breeding and confining these wild wonders really the best way to show our respect?

Rather than shipping butterflies in forced hibernation across the country only to have them awaken in unfamiliar territory for our entertainment, consider a more humane and beneficial butterfly-based event. Hold a wedding reception or birthday party in a butterfly sanctuary, where the mission is to educate people on why itās important to conserve threatened habitats. Commemorate a special anniversary or a memorialize a loved one by planting a butterfly garden.

Better yet, make it a regular habit to appreciate all kinds of insects. Spend some time each day looking underneath leaves for caterpillars and chrysalises. If you want to have a meaningful butterfly release, keep the caterpillars you discover protected in a netted cage with their food source, watch them spin cocoons, and wait patiently until they emerge with wings. Look forward to releasing native butterflies into their home range, knowing that you had a hand in rearing them. That’s truly something special to celebrate.