Yesterday, Ursula brought little Dixie over to meet us. She’s tiny! We told Ursula what a pretty lamb she is. That made Ursula smile. 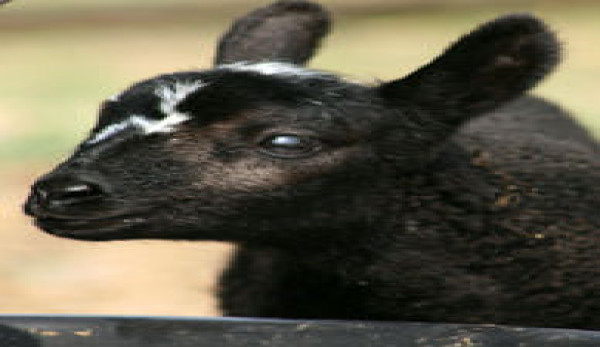 Yesterday, Ursula brought little Dixie over to meet us. She’s tiny! We told Ursula what a pretty lamb she is. That made Ursula smile.

Then we asked Ursula why it took so long to have her lamb and she said, “I wanted to have her at the full moon, but I couldn’t wait.” Uzzi and I must have looked puzzled because then she added, “Ewes often lamb at full-moon time. Didn’t you know?”

Uzzi and I looked at each other. We’re guys, so maybe that’s why it sounded like hokum. We decided we’d Google it during the night.

And guess what? We couldn’t find any scientific studies about animals giving birth when the moon is full, but there are some that talk about when humans have babies.

Since at least Roman times, humans have believed the moon affects birthing. And not just having babies but also how people act. It’s called the lunar or Transylvanian effect. Some hospitals and police departments schedule extra personnel when the moon is full because they think people act weirder around that time of the month. The term “lunacy” is derived from luna, the Latin word for “moon.” Imagine that!

But is it true? Not so, say researchers Ivan Kelly, James Rotton and Riger Culver of the University of Saskatchewan, who in 1996, analyzed 37 studies that examined relationships between the moon’s phases and in human behavior. They couldn’t find any positive correlations, so they came away unconvinced.

Some people think the moon exerts an influence on everything we do from setting fence posts to planting bean seeds in the garden. If its done in the correct phase of the moon (full moon, first quarter, second quarter, new moon, third quarter and fourth quarter) fence posts stay tight and the garden grows bushels of healthy beans.

Mom’s Irish grandpa did everything by the moon. She remembers him planting crops, like tomatoes, peppers and beans, that produce above the ground during the increasing light of the moon (between the new moon to full moon) and root crops, like potatoes, onions and carrots, that produce below the ground during the decreasing light of the third quarter. But he planted nothing during the fourth quarter because that’s when he cultivated, pulled weeds and zapped pests.

Mom sometimes plants by the moon, sometimes she doesn’t. When she does, she uses a free guide from Earl May Nursery. (To get it, mouse over “Information,” then over “How-To Guides,” and click on “Miscellaneous;” it’s the first item on the list).

Do you plant your garden by the moon? Or do you want to give it a try? Please add your comments! And if you want to learn more about it, buy a Farmer’s Almanac or go to your favorite search engine and type in “plant by the moon.”