Camels, low-maintenance animals that originated in North America, are cold-hardy and heat-resistant. They produce lots of milk and can be raised for meat and hides. Do they have a future in the American Southwest? 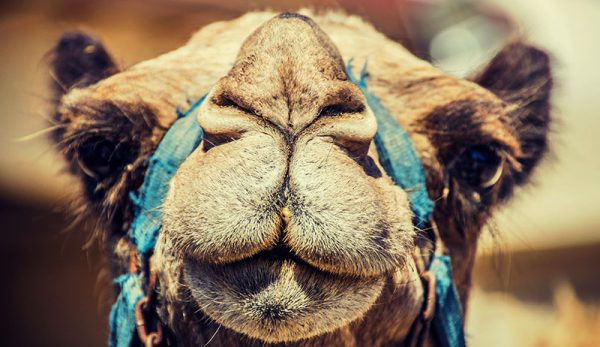 Learning about camels has challenged my previous assumptions. I always thought that a camel belongs in the desert. I’ve also jumped to the conclusion that a camel is an exotic animal and probably wouldn’t naturally thrive in the U.S., and that the animals that are here are being forced to live in a habitat that doesn’t suit them, solely for purposes of entertainment. But the camels of North America just might fit in here better than a lot of other livestock.

According to recent paleontologists‚Äô research, camels originally came from North America, and all camels today descended from goat-sized camelids that lived on the savannahs of this continent around 40 million years ago. Climate conditions fluctuated over the millennia, and transcontinental migration resulted in a variety of adaptations in the animals. These adaptations aren‚Äôt specialized for dry sand and heat, however. Some discoveries in the Yukon territory of Canada reveal fossil records showing the camels most closely related to modern-day species survived in an Arctic forest.

Two modern-day camel species are essentially classified by whether they have one hump or two. The vast majority of the 30 million camels today are one-humped dromedaries, or Arabian camels, and around 10 percent of the world‚Äôs camels are two-humped Bactrians. The truly wild camels of the world are Bactrians, and only around 1,000 of them are left. Feral camels number around 300,000 in Australia‚Äôs outback.

Camels are the most recently domesticated and least studied common livestock. While humans have developed close relationships with cattle and dogs for around 9,000 years, wild camels were approached only as a hunter‚Äôs prey up until around 4,000 years ago.

The adaptations that distinguish camels as hardy desert dwellers might also serve them in cold, harsh environments. Contrary to popular belief, the hump does not hold water, but excess fat, which is a good insulator as well as a storehouse of calories. Expandable blood cells actually store water throughout the camel‚Äôs body. The cells can swell to hold water and shrink to keep flowing. The rumen (first chamber of the camel‚Äôs stomach) also holds a reserve of moisture.

Camels derive most of their hydration from eating green foliage, so reliable bodies of water are not necessary in their habitat. Their bodies are very efficient with water. They lose only an average of 1.3 liters of water a day through feces, as compared with cattle, who lose as much as 40 liters per day. Specialized kidneys concentrate camels’ urine and enable them to tolerate salty water and eat salty plants. Closeable nostrils trap water vapor to retain a little bit of extra moisture too.

The camel‚Äôs body also has a great capacity of thermoregulation, adjusting body temperature to the extremes of hot days and cold nights. A camel will face the sun to limit the surface area of its body that is absorbing rays, and it will turn throughout the day to stay in that alignment. The broad, padded feet provide stability in shifting sand. Long eyelashes and third eyelids make wind and dust shields. Camel grazing behaviors are also well adapted for their environments and animal communities; they don‚Äôt overuse one area, and they fit well with other grazers because they browse higher up.

A camel is a relatively low-input, low-maintenance animal that produces large quantities of nutritious, lactose-free milk. With all this going for them, I wonder whether camels will be the new livestock of choice in the era of desertification of the American southwest. After all, they‚Äôve been at home on this range before. Historically, however, the U.S. has abused its relationship with camels. Cartoonish caricatures, a cigarette brand, circus performances and camel rides are our culture‚Äôs most popular associations with dromedaries.

There‚Äôs a difference in the Middle East, however, where a deep fondness for camels infuses language, poetry and stewardship of the elegant animals. There, camels are raised for meat, wool, fur and hides; their manure is used for fuel; they are raced for sport and bred for beauty contests; and they carry heavy loads long distances. Bedouin nomads rely on camel milk just as camels rely on the sparse vegetation they graze. Herders can identify a particular camel out of a caravan by a single hoof print. Their symbiotic relationships define human lifestyles and are integral to the fabric of societies. So, maybe it‚Äôs not a question of whether camels can adapt to our North American environment, and whether they fit in here. Maybe the real question is whether modern U.S. farming and ranching practices are worthy of these ships of the desert.