Can a Horse Fetch?

Rio, my Spanish Mustang, has decided he enjoys a little game of fetch. 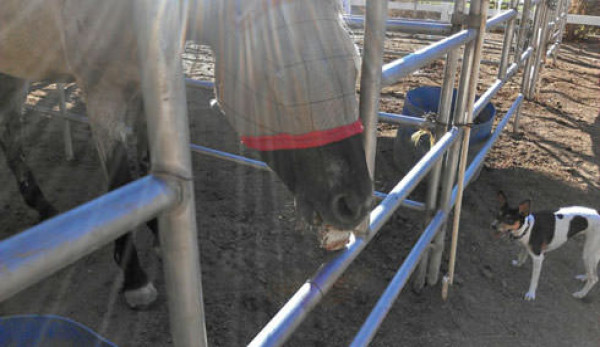 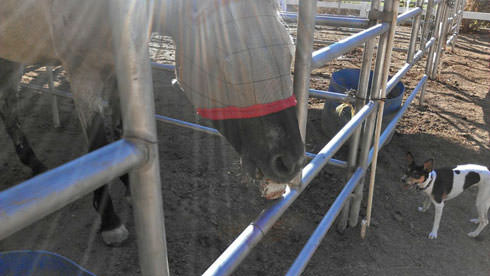 Olivia looks on in disbelief after Rio fetches her ball.

Rio, my young Spanish Mustang, is special. Iâ€™ve always known that. How many horses nicker while you kiss them on the nose? How many come running, even when they know the vet is standing beside you? How many nearly swallow your cell phone because you made the mistake of setting it down near them?

But the other day, Rio managed to surprise me. Apparently, he knows how to fetch.

It seems that my roommate Lisa was outside with the horses the other day, playing ball with her Rat Terrier, Olivia. Known for her love of fetch, Olivia runs at top speed to capture the baseball Lisa throws to her, and always brings it back for another toss. But the other day, when Lisa threw the ball for Olivia, it hit one of the bars on the horse stalls and bounced into Rioâ€™s stall.

Olivia knows she is not allowed to go in the horse stalls, and she stopped at stared at Lisa with a “Now what?â€ť expression. But before anyone had a chance to even think about what to do next, Rio walked over to the ball and picked it up.

Lisa called Rio to her, and asked him to bring her the ball â€” so he did. He stood with the ball in his mouth, apparently enjoying the sensation of it being there. I am certain that for Rio, this was a first.

Meanwhile, Olivia was baffled. What to do? How do you fetch your ball when itâ€™s in a horseâ€™s mouth?

This dilemma was eventually solved when Lisa asked Rio to drop the ball and she proceeded to take it out of his mouth. Rio was no doubt disappointed, since putting things in his mouth is his number-one favorite thing to do in the entire world. Nothing is immune from his chomping, including the stream of water that comes out of the garden hose when Iâ€™m filling up his water bucket.

When Lisa told me this story, I remembered the time a couple of Christmasâ€™ ago when I was riding Milagro and ponying Rio alongside, and we came across a Santa hat lying on the trail. I stopped and asked Rio to pick it up and give it to me. And he did.

I suspect my silly young mustang will someday outgrow his oral fixation and lose much of his compulsion to pick things up. Until then, Iâ€™m going to enjoy it.