Your two flocks can share feed as long as you keep some things in mind. 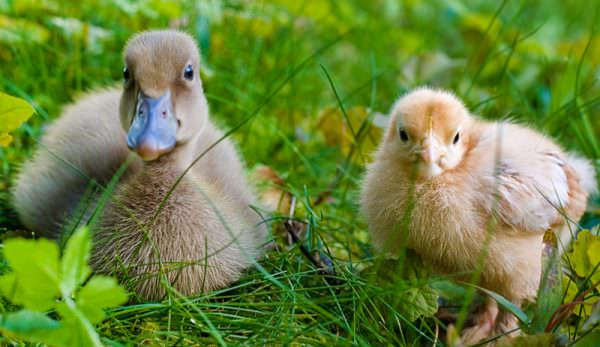 If you raise both chickens and ducks that share living quarters, rest assured that they can eat the same feed. Although commercial waterfowl feed is available in some areas, it can be hard to find, and if you let your chickens and ducks roam freely together, providing different feed for each wonāt work, as both will happily eat anything you put in the feeders.

Beware Of Too Much Protein

There are feeds on the market labeled for mixed flocks, but most are formulated for meat birds. These formulas are higher in protein and encourage fast growthāexactly what you donāt want when youāre raising ducks as pets or layers. Ducks that grow too fast can develop leg and foot problems, so be sure to read the label and steer clear of anything labeled for broilers or meat ducks if youāre raising a flock for eggs.

Too much protein can also lead to a condition in ducks called angel wing in which their wings start to curve away from their bodies rendering them unable to fly. While itās merely a cosmetic issue in domestic ducks that canāt fly anyway, in wild ducks the condition can mean a death sentence because theyāre unable to migrate or escape predators. (Adding some raw oats to the feed can help lower the protein levels and prevent this condition.)

A mixed flock can be fed regular chicken layer feed. Ducks do require slightly higher levels of niacin than chickens, so adding some brewerās yeast is a good idea. Brewerās yeast (up to a 2.5 percent) can help ducksā bones grow correctly and is beneficial to chickens, as well. Ducks will self-regulate their eating just like chickens, so feed can be left out all day for them to eat as much or as little as they need.

If your flock free-ranges, your ducks will eat all kinds of bugs, grass and weeds to help supplement their diet, which can result in a lower feed bill. If your flock is penned up, a few handfuls of greens in their water tub is a great way to amuse ducks and give them some added nutrient-rich treats. Ducks also need free-choice grit and calcium just like chickens do.

A Caution About Feeding Ducklings

Ducklings can be fed regular chick feed, but it should not be medicated. Because they arenāt as susceptible to coccidiosis as baby chicks, they donāt need the Amprolium thatās in the medicated feed. However, brooding ducklings with baby chicks isnāt a good idea. Not only do ducklings grow much faster than chicks, they splash around and make a huge water mess, which can lead to wet, chilled chicks.

Additionally, ducklings should only be on chick starter feed for the first two weeks (in contrast to eight weeks for chicks), and then switched to the lower-protein grower feed until they are about 18 weeks old. At 18 weeks, they can switch to the layer feed and be integrated into a flock of adult ducks or chickens.