Through a mixture of verbal noises and non-verbal behaviors and cues, chickens have a rich vocabulary, from warning of dangers to naming their keeper. 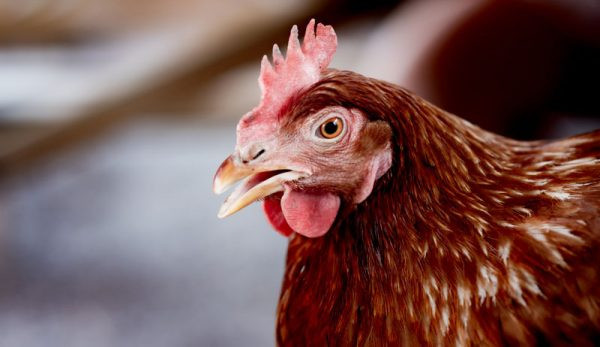 Despite appearances, that wasn‚Äôt chicken chat. That‚Äôs the sound of me and my wife, Chris, puttering around in the kitchen while mimicking the sounds of contented chickens until we bust a gut laughing.

When chickens are feeling comfortable and just scratching and snacking their way through the landscape, they sometimes engage in what I think of as ‚Äúbubble talk.‚Äù Lots of ‚Äúbub-bub-bub‚Äù type sounds. Chris and I sometimes amuse ourselves with bubble talk when we‚Äôre contentedly and quietly working in the same space.¬Ý

Most recently, we engaged in bubble talk (imitating our chickens) while she cooked a restaurant-quality dinner. I, in turn, performed a spectacular job of loading the dishwasher and other manly domestic tasks such as twisting open jar lids and reaching items on high shelves.

We were in the same space yet pecking away on separate projects. We weren‚Äôt even speaking, yet we were enjoying each other‚Äôs company.

What Did You Say?

Humans aren‚Äôt the only animals that have a specific vocabulary. As a kid, my favorite uncle owned a country gas station and store in which he kept a capuchin monkey and a mynah bird.

I was too young to remember what phrases the bird had been taught. And the monkey seemed to favor a variety of screeches in anticipation of eating. Even though I didn‚Äôt understand their vocabulary, I remember having a sense that any sound they made meant something specific for them even if I didn‚Äôt understand it.

The great apes‚Äîchimps, gorillas, orangutans‚Äîhave a sophisticated enough vocabulary and sense of communication that they can be taught to use American Sign Language with their keepers.

Little birds and coyotes sing their songs sometimes to define their territories. ‚ÄúIf you can hear my voice, you‚Äôre too darn close.‚Äù

The common gray squirrels use a variety of chirps and clicks to communicate to each other. And some whales craft epic story songs that can be passed around to other pods and down through generations.

Many animal researchers feel that chickens have communication skills on par with some lower primates.¬Ý

Read more: Do chickens have feelings? Yes! Here are 4 emotions you may see in the flock.

The Basics of Chicken Speak

And you don‚Äôt have to keep chickens long before you figure out that, when they talk, they have specific things to say to each other and to you. Chicken-keeper Melissa Caughey wrote the book How to Speak Chicken: Why Your Chickens Do What They Do & Say What They Say to address this topic.

She had never heard of chickens having a language. But after a couple years, she was pretty sure she kept hearing the same sounds in response to similar events.

Caughey tested her theory while visiting a friend who kept chickens. Despite these birds having no familiarity with Caughey, they all froze and turned a weather eye to the sky when she mimicked the high-pitched alert ‚Äúincoming: airborne predators‚Äù sound.

When she described the ‚Äúegg song,‚Äù I knew what she was talking about. Early on, when our hens first started laying eggs, we thought that we might have a rooster in the mix. There was some crowing that seemed to indicate testosterone poisoning in at least one of our birds.

The crowing was almost as loud as a rooster‚Äôs. But it sounded more melodic and triumphant than irritating.¬Ý

Caughey noticed chickens would talk using other vocal announcements at certain times: sounds of dispute, sounds of warning from broody hens, the calm notice that an egg was on the way and the ‚Äúgood night‚Äù murmur. She even noticed that the hens had given her a chicken name: ‚ÄúBup, bub, bup, baaahhhh.‚Äù

The first three sounds are low, and the last one is an octave higher. They use this when they see her, when they want something or while snuggling in her lap.¬Ý

To Caughey, her name sounds regal. She writes that most chicken-keepers probably have chicken names, too. Spending plenty of time and taking notes and recording the sounds you hear and what activity they may be associated with is the way to isolate your flock‚Äôs chicken name for you.¬Ý

We haven‚Äôt yet taken enough notes to determine what our names might be when our chickens talk amongst themselves. But I‚Äôm pretty sure I can guess our dog‚Äôs names for us.

My wife goes by ‚ÄúMy queen.‚Äù My name is probably ‚ÄúHe who spills food on floor when he eats.‚Äù (I don‚Äôt really spill that much food on the floor. Mostly, it lands on my shirt.)

A psychology professor once told me that 87 percent of human communication is nonverbal. I didn‚Äôt believe it at the time, but now I do.

A person‚Äôs body language, physical distance, tone of voice and other ‚Äútells‚Äù convey much more beyond what the transcript of someone‚Äôs conversation would reveal. The same goes for chickens if you‚Äôre paying attention.

Roosters, being the male of the species, have a lot to say, verbally and otherwise. And some of it matters. For instance, Caughey says a roo will tap on doors to alert chicken-keepers that hawks are about and scaring the poop out of his harem.

She also says that roosters will squawk when the keeper is mistakenly closing up the coop before the last hen has found her way back. Here are some other nonverbal ways chickens might “talk.”

Roosters will communicate by doing what‚Äôs called tidbitting. This is a little performance to attract females‚Äîno surprise there.

The rooster makes a food call to an attractive hen and then does a head-bobbing dance as he picks up and drops bits of desirable food. It‚Äôs a way of offering a gift to a female, who may allow him to mate with her.

Australian researchers K-Lynn Smith and Chris Evans spent months tracking every interaction between members of their flock and realized that every good deed that a male performs has a bearing on their success at getting a mate. The females actually remember which males have fed, not just them, but all the other hens going back over a period of six months.

These Australians have also discovered that subordinate roosters perform tidbitting but without using a food call. They don‚Äôt want to attract attention from a jealous alpha rooster. They engage in subterfuge, and sometimes see more action with certain hens.

What Are Wattles For?

Smith and Evans have also discovered that the variation in the size of roosters‚Äô wattles has to do with these romantic liaisons. While combs clearly show who has the best foraging skills and general health, the wattle has been a mysterious organ with no observable purpose‚Äîuntil now.

When the alpha rooster engages in tidbitting, the wobbles of his substantial wattles catch the eyes of nearby hens. But these wobbling wattles on a low-ranked rooster can attract the unwanted attention of a ticked-off alpha rooster instead. So lower ranking roosters do better by the females if they have minimal wattage.

It does make them less visible to females. But, more importantly, their wattle shortage spares them from alerting the alpha rooster. There is no sense attracting his attention when you‚Äôre flirting with hens that he thinks belong to him.

But the hens have the last word when it comes to sending nonverbal messages. Some hens will lay fertile eggs amongst the eggs of a higher-ranking hen rather than in a nest they‚Äôve made themselves.