Exotic fish have been linked to the transmission of ranaviruses to native amphibians, so think twice before adding them to your backyard pond. 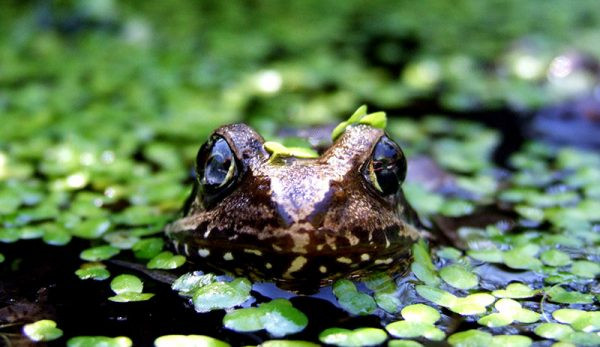 In recent years, there has been some furor in garden media and conservation news about a viral pathogen plaguing amphibious animals, including frogs, toads and salamanders: ranavirus.

The systemic illness that results from infection with the virus, which is called ranavirosis, can cause amphibians to have severe skin ulcers and lose limbs. The virus is now found all around the world, and has contributed to the decline in at least 70 species of amphibians globally, mostly frogs, toads, and salamanders. In the U.S., it has been linked with mass deaths of 20 species, including box turtles alongside the amphibians.

Numerous articles on the subject focused on the fact that the disease has likely been spread by the pet trade, and one of the main transmission vectors has been exotic pond fish. Ranaviruses can live in reservoir hosts like reptiles and fish, for example.

These articles, however, overlook a key finding in the studies on viral diseases among amphibians: While the disease may ultimately be the killer, there are a host of environmental factors at play making amphibians more susceptible to all manner of pathogens.

Habitat loss and fragmentation, loss of biodiversity, and contact with pesticides and fertilizers all dramatically increase the likelihood of amphibians contracting ranavirus, in addition to theÂ severity of ranavirus infections.

Indeed, according to Jason Bittel at the NRDC, â€ś[e]xposure to atrazine, a widely used weed-killer, has already been proven to make tiger salamanders more susceptible to Ranavirus. Scientists have also shown that pesticides such as DDT can trigger immunosuppression in leopard frogs.â€ť

So while itâ€™s always a good idea to go for native species in landscape interventionsâ€”foregoing the introduction of exotics like koiâ€”the best thing gardeners can do for their local frogs is eliminate the use of pesticides, and campaign for the conservation of local amphibian habitats.

These solutions will do a lot more for amphibian populations than boycotting fish!