Can You Spot The Tree Frog?

A nighttime symphony echoes through our farm, but the musicians have yet to be spotted. 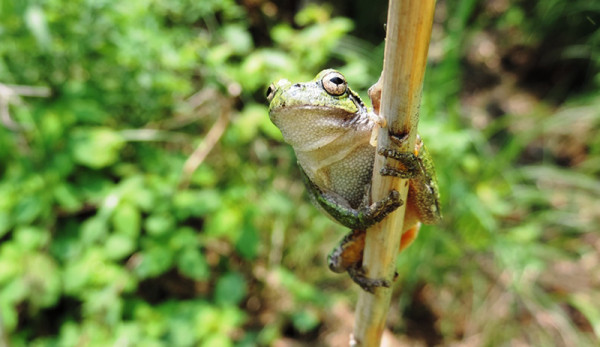 I have an easy answer to that question up there: No. This time of year, tree frogs are obviously all around. At dusk, they begin their glorious symphony of chirping, growing louder if thereâ€™s a rain shower and growing quieter if a human or other animal passes by. I love cracking the windows at night and letting their sweet lullaby lull me to sleep. But as hard as Iâ€™ve tried to spot a tree frog, it has yet to happen.

Kentucky plays host to several different types of tree frogs. The one thatâ€™s likely in our areaâ€”though, Iâ€™ll never know for sure until I can actually spot oneâ€”is the Copeâ€™s Gray tree frog (Hyla chrysoscelis). Its vocalization, described by the Kentucky Fish and Wildlife Service as a â€śloud, harsh, rapidly blurted trill,â€ť is definitely one Iâ€™ve heard during our time on the farmâ€”though, I wouldnâ€™t say itâ€™s as displeasing to the ear as the description indicates. However, itâ€™s not quite the melody weâ€™ve been graced with this time of year, which is more akin to a cricketâ€™s song.

Weâ€™ve been told by neighbors that what weâ€™re hearing is indeed tree frogs, not crickets, and I believe it. The sound is more pleasant and blends more nicely into the environment than a cricketâ€™s noise. I just wish I could tune my ear into what species is exactly making the sounds.

We have two old cattle ponds and a lagoon which likely serve as home to our nighttime noisemakers. Itâ€™s about this time of year that the Copeâ€™s Gray tree frog will begin its mating ritual, laying its eggs through mid-August anywhere they can find water. This time of year, with all the rain weâ€™ve endured, it seems they wonâ€™t have to look too far to find a suitable creek or ditch if the ponds donâ€™t suffice. The rest of the year, they spend their time high in the treesâ€”and we have plenty to share with them.

A weird and wonderful fact about the Copeâ€™s Grayâ€”and I love all the weird and wonderful things weâ€™re learning about our landâ€”is that it freezes during winter, but it doesnâ€™t die. The glycerol, a viscous liquid, that circulates through the frogâ€™s body turns to glucose in the winter, serving as an antifreeze to protect the frogâ€™s cells from shutting down when the weather turns cold. The rest of the frogâ€™s body then freezes, essentially turning it into a frog Popsicle, until the spring thaw arrives. Iâ€™ve never spotted a frozen froggie on my winter walks, but you better believe that next year, Iâ€™ll be on the lookout.