Can This Goat Pass as a Reindeer?

Do I look like one of Santa's reindeer? I think I do! Maybe not Rudolf, though, because my nose is the wrong color. 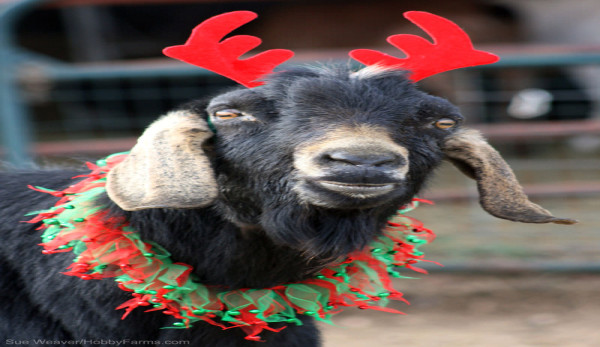 Do I look like one of Santa’s reindeer? I think I do! Maybe not Rudolf, though, because my nose is the wrong color.

Rudolf the Red-nosed Reindeer made his appearance in a booklet written in 1939 by Robert L. May for the Montgomery Ward Company. May considered calling his red-nosed deer Rollo or Reginald but settled on Rudolph instead. Montgomery Ward distributed 2.5 million copies of the booklet in its first year of publication. It’s since spawned scores of spin-offs in print, television, movies and song.

May’s brother-in-law, Johnny Marks, was a songwriter who specialized in Christmas songs, among them “Rockin’ Around the Christmas Tree,” “A Holly Jolly Christmas” and “Run Rudolph Run.” But his most famous song is the one he adapted from May’s story, “Rudolph the Red-nosed Reindeer.” Singing cowboy Gene Autry’s rendition topped Billboardâ€™s pop-singles chart in 1949 after selling 2.5 million copies. It eventually sold more than 25 million copies. Wow! It was later recorded by Bing Crosby, Spike Jones and his City Slickers, Dean Martin, Alvin and the Chipmunks, The Supremes, Chicago, and Ringo Starr to name a few.

Rudolph made his big-screen debut in a cartoon released in 1944. In 1998, Rudolph the Red-Nosed Reindeer: The Movie was released and became an instant Christmas hit. Most everyone has seen the animated TV special, Rudolph the Red-Nosed Reindeer. It came out in 1964 and has aired nearly every year since. Did you know it was filmed in Japan and the sound recordings were made in Toronto? It’s an international Christmas treat.

But Rudolph isn’t the only famous Christmas reindeer; there are also the reindeer that pull Santa’s sleigh. In 1823, a college professor named Clement C. Moore penned a poem called “A Visit from St. Nicholas” that eventually became known as “The Night Before Christmas.” Of the eight reindeer pulling St. Nick’s sleigh he wrote:

In case you don’t know it, Donder and Blitzen are German names that mean Thunder and Lightning. Nowadays, people tend to spell Donder’s name “Donner.â€ť

Other writers, like L. Frank Baum, who is famous for writing The Wizard of Oz, give Santa’s reindeer different names. In 1902, Baum wrote a story called The Life and Times of Santa Claus in which 10 reindeer pull Santa’s sleigh. Their names are Flossie and Glossie, Racer and Pacer, Fearless and Peerless, Ready and Steady, and Feckless and Speckless.

Mom thinks the weirdest names for Santa’s reindeer are the ones in Bob Dylan’s Christmas song, “Must Be Santa:â€ť Eisenhower, Kennedy, Johnson, Nixon, Carter, Reagan, Bush and Clinton.

But enough of fictional reindeer. Next week we’ll talk about real, live reindeer and how you can raise them on your farm

Ask Martok!
Do you have a livestock or wildlife question you want me to answer?Â Send me your question!
Please keep in mind that I receive a lot of questions, so I wonâ€™t always be able to answer each one immediately. In the case of an animal emergency, itâ€™s important to reach out to your veterinarian or extension agent first.