Can You Cut Hay With A Brush Hog?

In a pinch, a brush hog can replace a mower/conditioner for cutting hay. But there are a few shortcomings to be aware of before you begin. 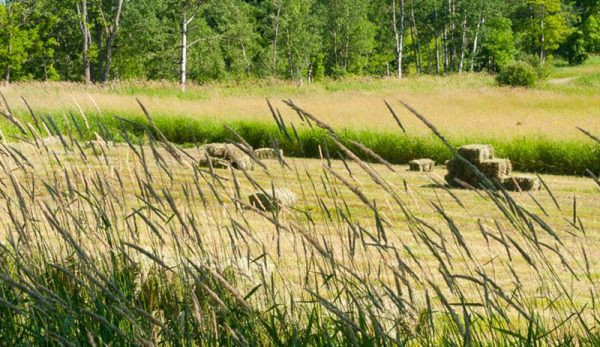 Hay season is officially underway on my northern Wisconsin farm. But the first round of production began on a decidedly experimental note.

Our regular tool for cutting hay? An old mower/conditioner specifically designed for hay production. But the mower/conditioner needed a repair this year. While we waited for the replacement part to arrive, a picture-perfect, four-day stretch of sunny weather popped up in the forecast.

Reluctant to let such an ideal haying window pass by, we elected to try cutting one small field with a brush hog. We did question whether the thick, whacking blades of the brush hog would cut hay with enough precision for raking and baling. But we decided to give it a try.

If it worked, we could to bale a field in perfect weather and count our brush hog as an effective backup for the mower/conditioner. If not, we wouldnāt give up many bales from the small field. And at least we’d mow the field.

Read more: You need some tractor attachments. Others, you just want.

Rather than cut the whole field at once, we took a couple of test spins around the perimeter to see how the brush hog performed. At this point, several shortcomings became obvious:

Taking these shortcomings into account, we conceded the brush hog didn’t perform as effectively as the mower/conditioner at cutting hay. But after raising its height, the brush hog got the job done. It laid down hay in more-or-less steady rows.

So we proceeded to cut the field and cross our fingers.

From this point on, we were pleasantly surprised. The hay needed three days to dry. But it raked up nicely and baled into light, fluffy bales.

They baled a little loosely (maybe not surprising given how the brush hog cut the hay into such short pieces). But they stacked satisfactorily enough.

All told, we produced 60 bales using our brush hog as the cutter. We expected to produce around 90 with the mower/conditioner, though. So the brush hog evidently left a fair amount of grass uncut.

We definitely wonāt upgrade the brush hog to the status of primary hay cutting implement!

But I enjoying knowing it can fill in for the mower/conditioner if absolutely necessary.