Can You I.D. That Native Bee?

There are some 4,000 different species of bees in North America and some are more common than others. Here are four groups to be on the lookout for. 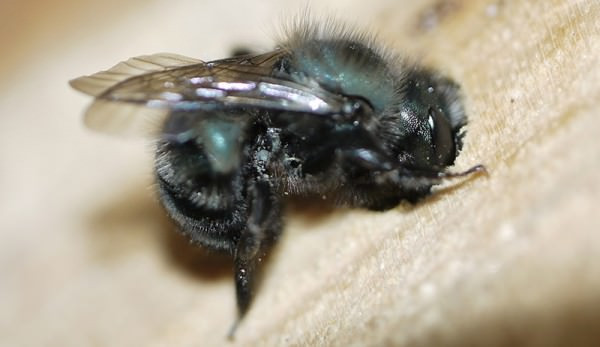 This large group of bees contains several hundred species. Mason bees are tunnel nesters that create brood tunnels in wood and hollow stems. They are important early-season pollinators, particularly in the orchard. They carry pollen on the bottoms of their belly instead of on their hind legs, so their abdomen is often coated with whatever color pollen they consumed. Mason bees use mud or chewed-up leaves to separate the brood cells in their nest. They are far more efficient at pollinating orchard trees than Honey bees.

Mason bees are medium-sized, usually a blue-black color, sometimes with gray hairs. Some species are iridescent blue or green. Mason bees are also sold commercially as brood cells in paper tubes. If you choose to purchase mason bees, be sure they were reared in your region of the country. Many diseases and unwanted genetics are spread by transporting bees into other regions. Youâ€™re better off setting up an empty nesting block or hollow twig bundle and letting the indigenous population move into it.

This group consists of about 13 species that are all medium to large in size, often with drab-brown coloration and soft striping. They specialize in pollinating members of the cucurbit family, including pumpkins, melons, squashes and gourds. Squash bees are abundant where squash is regularly grown and are found everywhere in the U.S. except for parts of the Pacific Northwest. They nest in the ground and are solitary.

These small insects can range from 1/4 to 1/2 inch in length and are highly abundant in temperate regions. Sweat bees visit a large number of crops, and some have very drab coloration while others are brilliant and metallic. They pollinate everything fromÂ raspberries andÂ strawberries to watermelons and fruit trees and are also found regularly on many different herbs and ornamental flowers. They are particularly important pollinators for stone fruits, pomme fruits, alfalfa and sunflowers. All the hundreds of sweat bee species are ground-nesting, and most are solitary.

These easily recognizable bees visit a variety of crops and are active from early spring until late fall. Bumblebees pollinate blueberries, squash, sunflowers and many other crops. Theyâ€™re social bees that live in colonies and nest in cavities.

You know youâ€™re looking at a bumblebee if its body is large and fuzzy, often yellow with black stripes. About 50 species of bumblebees live in the U.S., and theyâ€™re particularly important to crops in the nightshade family, such asÂ tomatoesÂ and peppers, because they vibrate the flowers to shake out the pollen found deep within the flower. (This is called buzz pollination, and the buzz takes place at about the same frequency as a middle C.)

Bumblebeesâ€™ numbers are in sharp decline as several imported diseases have been introduced to wild populations.

This article originally appeared in “Pollinator Central” in the July/August 2013 issue of Hobby Farms.