Uzzi and I look forward to Halloween because the day after Halloween, pumpkins go on sale and Mom buys us lots of pumpkins to eat. 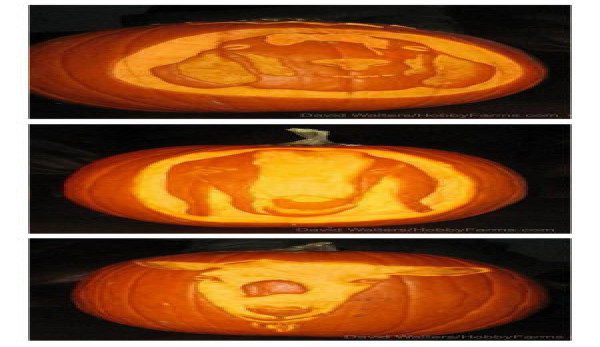 Uzzi and I look forward to Halloween because the day after Halloween, pumpkins go on sale and Mom buys us lots of pumpkins to eat. Pumpkins are packed with good stuff like vitamins, minerals and an important antioxidant called carotene. And they taste yummy, too! We’ll discuss pumpkins as food next week, but today, let’s talk about jack-o’-lanterns!

Pumpkins are a type of squash, and squash are native to North America. Squash and pumpkins were a staple food for eastern Native American tribes. When European settlers came to North America, their native friends showed them how to grow and eat pumpkins.

In the olden days jack-o’-lanterns weren’t made of pumpkins—or pumpions, as British people called them. They were hollowed out turnips with grotesquely carved faces. When the tradition of carving Halloween jack-o’-lanterns crossed the sea, pumpkins became the vegetable of choice.

The first reference to carved pumpkin jack-o’-lanterns occurred in 1834, according to The Oxford Dictionary of English. In 1850, American poet John Greenleaf Whittier wrote a poem called “The Pumpkin” in which he said:

Oh!—fruit loved of boyhood!—the old days recalling
When wood-grapes were purpling and brown nuts were falling!
When wild, ugly faces we carved in its skin,
Glaring out through the dark with a candle within!

According to the Guiness Book of World Records, the heaviest pumpkin ever grown weighed 1,810 pounds and 5 ounces. It was grown by a couple in Ontario, Canada, but it wasn’t used to make a jack-o’-lantern.

David Finkle of the United Kingdom hold the Guinness world record for the fastest time to carve a face into one pumpkin. He did it in 20.1 seconds flat! He also holds another Guinness record for carving 102 pumpkins in one hour. Steven Clarke of the United States carved faces into 1 ton of pumpkins in 3 hours, 33 minutes and 49 seconds. Wow!

Will you carve a jack-o’-lantern this week? If so, here are some tips to help you create a masterpiece this year.