Fall is here and the castagne (chestnuts) season has started. 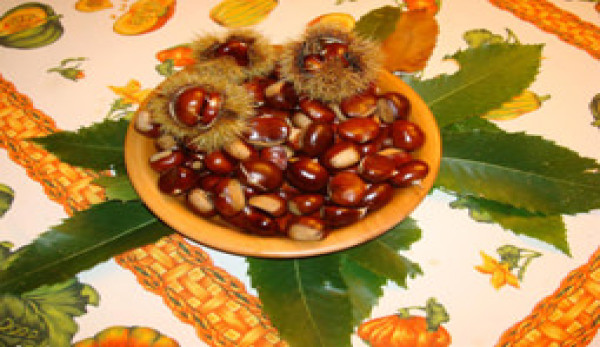 Fall is here and the castagne (chestnuts) season has started. The woods around here are loaded with castagne (Castanea sativa) trees, and the nuts start falling once the weather turns cold. We usually collect alongside a paved road where there are castagne trees overhead, so when the nuts fall and remain in their spiny pod we can squash the pods with a foot to make the nuts squirt out. The biggest nuts usually fall out of the pod, though, so when we find a tree that makes big nuts, we can just pick them up off the ground. Often when we are collecting, the nuts are falling at the same time so during the some of the best collection trips, we get hit by nuts falling from the trees.

When I first moved here, I was interested to hear of these big nuts. Of course Iâ€™d heard of chestnuts (â€śChestnuts roasting on an open fire…â€ť), but Iâ€™m from California, and the closest we have there are the chestnut cousins called horse chestnuts or buckeyes (Aeschylus). Buckeyes have great big nuts, but theyâ€™re not edible. Iâ€™ve also sold a lot of flowering chestnuts (a different Aeschylus species) in the nursery business, but I had never lived where there were edible chestnuts growing wild.

About a month after I moved here to Italy, I was at a fair somewhere and there was a guy with a little wagon set up to roast chestnuts, so I excitedly bought a little paper bag full of the roasted nuts, expecting a great tasting treat. Unfortunately, I thought the chestnuts were just mealy and not so flavorful. I ate one and ended up throwing the rest into the garbage.

I donâ€™t remember how I decided castagne were delicious, but it probably had something to do with my love for collecting edible stuff in the woods. Or it might have been one of the festivals in the fall around here that celebrate castagne and roast a whole bunch on the beach or something like that.Â  Anyway, now Iâ€™m nuts for roasted chestnuts. Actually, I now enjoy castagne in all forms and I even peel a few and eat them raw while weâ€™re out collecting. My mother-in-law really likes it when we bring her chestnuts weâ€™ve collected, and she and my wife use the castagne to make a nice rustic pastry called castagnacia, which is sort of a hardened chestnut pudding with nuts and raisins.

The lumber from castagne trees is the hardwood of choice around here. Almost all of the old rural houses have ceiling beams made from big castagne logs, and the two story places use castagne beams as the flooring support. The wood is also used for fenceposts because the wood is resistant to decay and water damage.