When you need to catch one of your birds that is set on getting away from you, use one of these approaches. 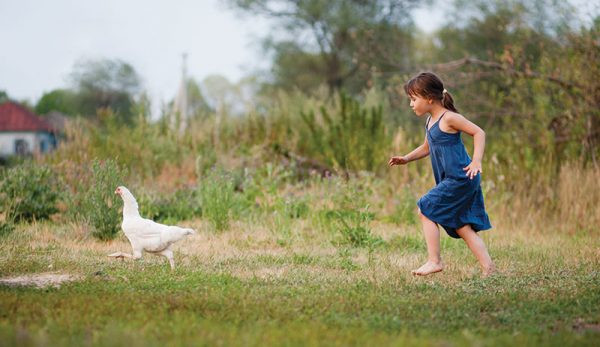 Have you ever tried to catch a wary chicken that doesnâ€™t want to be caught? Chickens are fast, agile and single-minded. Youâ€™d better have some tricks at the ready when you want and need to catch one.

No matter how you catch your chickens, be sure to hold them so they feel secure and you do no harm. That means never holding a bird by its neck, its wings or upside down by its legs.

Many people believe that holding or carrying a chicken by its legs is OK because itâ€™s convenient and it seems to calm them down. However, a chickenâ€™s lungs are right next to the spine and upper ribcage, so held upside down, the weight of its organs presses down on its lungs and some of its air sacs. The bird stays still rather than flopping around because it canâ€™t breathe.

Instead, a good way to handle a chicken is to place one hand over each wing and pick the chicken up. Hold the bird against your body, keeping one hand on the wing farthest from your body. To carry the chicken, tuck it under your arm with your forearm holding the wing against your body and place several fingers between its legs. The chicken can face forward or backward. Be sure to hug it close to your side so it canâ€™t flap or jump down.

The best way to avoid a struggle when you need to handle your chickens is to tame them so they donâ€™tÂ mind being picked up. Start when they are chicks, if you can. Gently cup each baby bird loosely but carefully in your hands, hold it close to your face, speak softly and place it back in the brooder. Do this every day.

When dealing with older birds, sit among them, placing a pan containing scratch grain or favorite garden goodies within reach. Sit still and donâ€™t touch; speak quietly, and let them eat and then go on their way. After a few days of this, hold some goodies in your open palm, just above the pan. Soon theyâ€™ll eat out of your hand. Next, start lightly touching them as they eat.

When they seem ready, quietly pick one up and hold it in your lap. Offer a special treat, and stroke the wattle. Chickens like that. Your chickens will learn to trust you and be easier to catch.

Hereâ€™s a variation on that theme: If your chickens are only semi-tame, sit on a chair and sprinkle scratch feed in front of you near your feet. When the chicken you want to catch comes near, you spring into action.

Donâ€™t grab the chicken by a wing or its neck. Clamp your hands around its sides to immobilize its wings and prevent flopping. Then, pick it up. Keep in mind that many chickens, hens especially, squat when a hand is placed firmly on their backs, so thatâ€™s worth trying, too.

To catch a chicken quickly, you can use some old-time advice: Create a snare by taking a cord and making a slip-noose in one end about 20 inches in diameter. Lay the snare on the ground, sprinkle some corn around it and stand off some distance with the other end in your hand. When the chicken gets its feet within the circle of the cord, pull quick.

If the chicken you want to catch is a layer, wait until sheâ€™s in the laying box and preoccupied, so you can catch her unawares.

Chickens are more easily captured in a henhouse or pen than in wide-open spaces, so recruit some people to help you quietly drive the flock to an enclosed space. Crouch and hold your hands out at your sides while herding, to make you appear bigger.

It can still be difficult to catch corralled chickens if your henhouse or pen is a large one. Plan ahead to reduce its size by stretching a barrier made from a length of chicken wire or plastic snow fencing across its width to help drive captured chickens into a corner.

Pretend to Be a Roo

Hens stop walking and crouch and raise their wings a bit when theyâ€™re about to be mounted by a rooster. Approach a hen youâ€™d like to catch from the rear, towering over her, and she might assume the submissive mating posture long enough to scoop her up.

If you have a renegade escapee from the henhouse that absolutely refuses to be caught, set a live trap baited with something your chickens like. Place it near the spot the escapee roosts; chances are, itâ€™ll take the bait.

If you donâ€™t want to purchase a live trap, rental stores often carry them. Choose a big one. Cages designed to catch opossums and raccoons work best for most breeds; giant breeds need one size larger.

If you have to catch a wary chicken in an open area, get lots of help. Chickens dodge and dart erratically when they are approached from many sides. Chances are the chicken you want to catch will get close enough to someone who can capture it.

Keep everything low key; you want to catch them, not scare them to death. Certainly donâ€™t include excitable dogs or loud children in the catching process.

The easiest and least stressful way to catch a chicken is at night when itâ€™s roosting. Wait until full dark and the chicken is asleep. Donâ€™t turn on the lights. Bring a friend with a flashlight or wear a headlamp. Donâ€™t shine the light in the chickenâ€™s eyes; use just enough light to be sure you have the right bird. Move quickly, clasping it firmly with its wings clamped against is sides. Even ultra-wild chickens are easily caught this way.

Use a large pool skimming net or a fish-landing net to catch your chickens. It works best to let the chicken run into the net, but you can drop it over the bird as well. You should expect to do some gentle detangling, though, especially with fishnets, because of the larger mesh.

Make or buy a poultry hook. Then you can catch a chicken by snagging its leg and quickly pulling it to you before it struggles free.

Itâ€™s best to use a hook when chickens are quietly going about their business rather than in a flurry over being chased. Be careful. Chickens have hollow bones and can be seriously injured by overenthusiastic use of a hook. Never hook a bird around its neck.

Catching and carrying chickens neednâ€™t be a rodeo if you plan ahead. Try one or more of these methods. Youâ€™ll be pleased, and your chickens will be happier too.