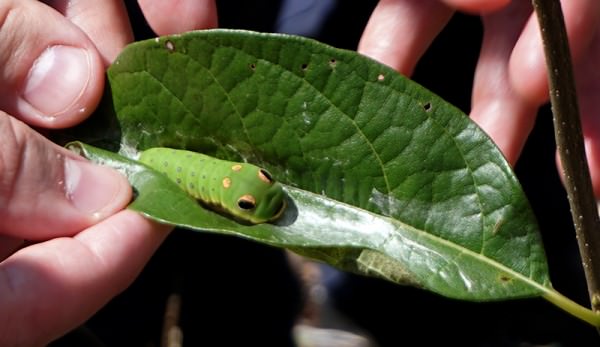 It’s early fall—time to prune and trim and pare down. Nature has provided some eager little helpers to take care of defoliating shrubs, trees and forbs just when it’s the right time to cut back: caterpillars.

I am also fascinated with how Nature abhors boredom (as do I). Nature could just provide a supply of juicy bird food each autumn and spring and make it easy for young nestlings. Why not just give them monotone, wormy, non-descript larvae that are easy to find and catch? That would be too simple. Nature intends to play some diversity games with caterpillars. She provides these relatively immobile, vulnerable, soft-bodied juveniles with secret weapons: camouflage, mimicry, foul taste and stinging hairs.

To get to know my local caterpillars better, I went to a caterpillar hunt at a nearby nature preserve. The preserve directors led some friends, a few families with small children, and one woman who bravely attended to overcome her fear of caterpillars. The diversity of this group made it more interesting to find and identify caterpillars, each of us pausing to look under leaves and take second glances at shapes on stems. By the end of the hike, nobody was afraid of caterpillars and we learned a healthy respect for them.

I first heard of the monkey slug during a slideshow presentation at a native plant club meeting. I was immediately impressed with this grotesque, bizarre, and enigmatic animal. Seeing the photo projected onto a screen, I thought it must be a huge creature. But at the nature preserve, I got to see one in real life and was surprised to find that it’s pretty small. It’s not exactly the sea monster-meets-gorilla that I thought it would be, but that doesn’t mean it wouldn’t scare off birds.

If the dead-leaf look doesn’t hide it well enough, birds could mistake a monkey slug for a tarantula’s cast-off skin, which holds stinging hairs. Oddly, monkey slugs live where tarantulas don’t, and vice versa. These undulating, furry caterpillars might have adapted their appearance to dissuade birds that migrate from the Neotropics, where they would be familiar with the dangers of tarantulas. If you live in the eastern U.S., look around cherry, chestnut, apple, persimmon, oak and walnut trees for this elusive mimic. 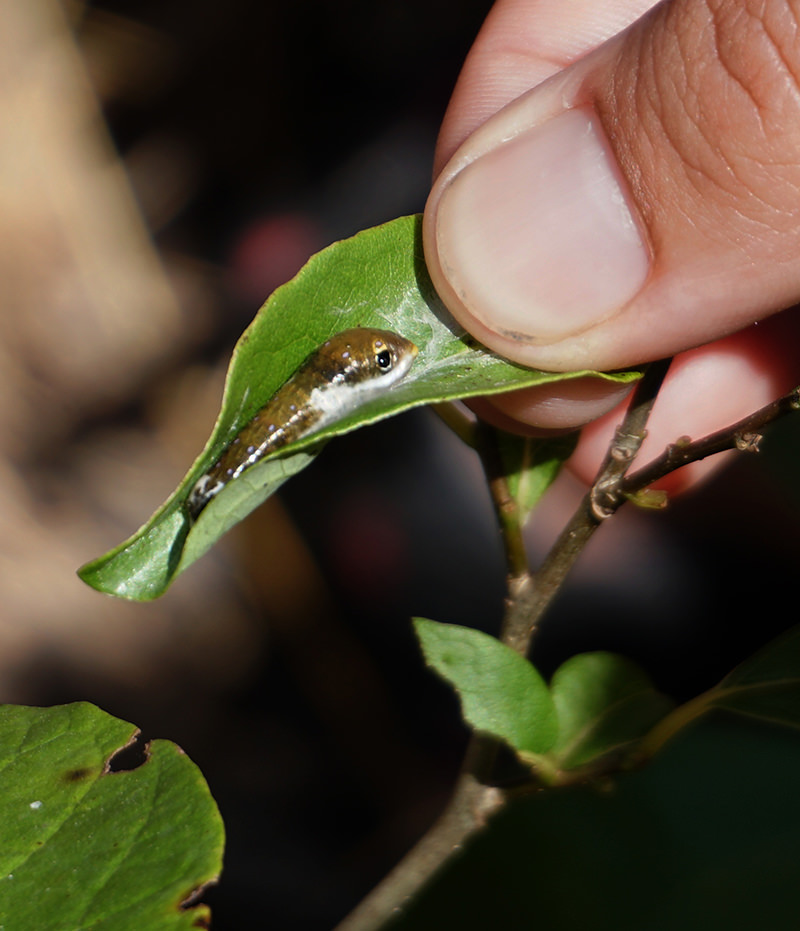 Native plants do well with native animals. It’s a no-brainer. They grew up together, they like each other, and they get along better together. Some are so specialized, that they cannot live without the other. The spicebush swallowtail caterpillar will starve to death rather than eat something other than spicebush or just a few closely related hosts. An additional challenge is that spicebush makes great bird habitat, which may be why the caterpillar is so well-camouflaged. It’s early stages tend to resemble bird poop (see above). Late stages of development have spots that mimic snake eyes (see below). Spicebush is an amazing plant to have around for its aromatic bark, dark foliage, its lovely early spring flowers, and its spicy little seed, which can be substituted for allspice.

You may be familiar with most garden-variety caterpillars, but many more like this will show up if you plant edible perennials like crabapple, blueberries, maples, and walnuts. Branch out and plant native trees for the myriad of benefits they provide (air quality, soil stabilization, shade, beauty, organic mulch, to name just a few). BringingNatureHome.net has a great resource for finding out how many hundreds of butterflies and moths each of these will host. Oaks alone can support 534 species!

This is one dangerous little caterpillar—and it wants that message to be clear. The prominent bristly hairs give fair warning that it will cause severe irritation, so don’t pick it up or let it crawl on you. If the warning doesn’t work, it can also play the victim card, to avoid being taken advantage of. Notice the white spots (see above). Those tufts outsmart a parasitoid wasp, like the braconid, which is looking for a host for its eggs. To the wasp heavy with young that will soon need to feed on caterpillar flesh, the message this one sends is, “No vacancy, already being sucked dry, please move along.”

Back in the garden, in our tomato rows, I find a hornworm (Manduca quinquemaculata). It is dying a long, slow death. It looks like a shadow of its once-robust, colorful, leaf-munching self. Tiny white cocoons of braconid wasps hang all over the motionless caterpillar, evidence of an organic garden at work. A lot of flowers attracted the beneficial wasps that took care of the tomato destroyer. The horned creature, which Nature had designed so well to look fierce and merciless, has been subdued through an equally-matched predator.

Finding caterpillars trains your eye to notice very subtle differences among plants. Once you begin to see the ways a caterpillar can blend in perfectly with its surroundings, you’ll start second-guessing every browned leaf, bulge on a stem and bird dropping you see. That’s OK. As you give your garden more attention, it will give back a whole host of curiosities. Keep looking, stay curious, and Nature will never let you get bored.