Cattle & Their Wild Cousins: How Livestock Has Adapted for Winter

In this first of four parts, we learn that bison use their heads in blizzards, yak can survive sub-zero winds, and water buffalo need warmer weather. 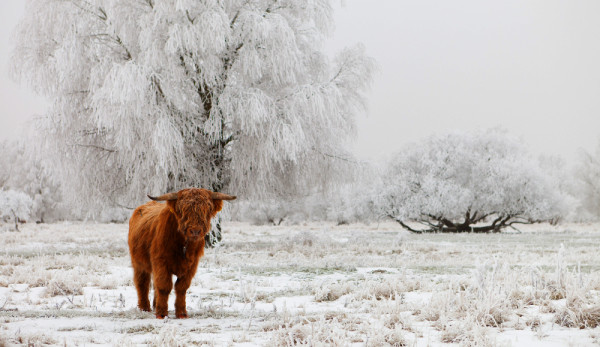 Understanding our modern-day domesticated cattle’s wild history and where they come from can help us support their comfort and health during the winter. Here you’ll get to know some basics about the origins and wild relatives of cattle so you can watch your own herd for the family resemblance.

Bovines, including all breeds of cattle, bison and water buffalo can be traced back to Leptobos, an oxen-like antelope that lived around 2 million years ago. One branch of the Leptobos family tree is the aurochs, the ancestor of cattle that became domesticated in Asia, North Africa and Europe. To fit the climate, European varieties were selectively bred to be a bit larger and woollier in the winter.

Across the globe, our North American cattle have distant cousins whose biology is suited to their climates. If thereâ€™s one cattle relative that has what it takes to withstand cold temperatures, itâ€™s the yak. Only a few hundred animals are left in the wild, representative of the large population that once freely roamed the Himalayas. The hardy yak can survive at elevations of 20,000 feet, living on small tundra plants and lichens. Its short legs help it climb and keep its balance, and it grows at a slow rate, taking about eight years to mature. The wild yakâ€™s woolly undercoat insulates its thick skin beneath locks of outer hair that’s two feet long. All these layers provide protection against sub-zero winds.

Bison resemble yaks in some ways, with thick, shaggy manes. Bison will turn a furry face toward winter precipitation, even in blizzard conditions. This position lets the most cushioned parts of their bodies take the brunt of the cold while blocking their backsides from the chill. The large hump on the bisonâ€™s back attaches the strong muscles of the shoulders and neck, powering its massive head to act as a snowplow that swings from side to side, clearing the way to moist grass.

The bison that we associate with the American West and the Plains tribes had another adaptation, an instinct that kept them healthy through the harsh winters. They migrated. Before railroads, fences, excessive hunting and imported disease made their mark on North American bison herds, the 60 million or more animals ruled the landscape. They roamed as far north as Canada and as far south as Mexico, from the Smoky Mountains in the east to the Rocky Mountains in the west. From winter to summer, a herd would typically move in a circular route that covered 400 miles each year, following the seasons to maximize nutrition.

Like bison, some cattle have humps that help them adapt to cold climates. Humped and humpless types of cattle evolved separately. Neck humps tend to hold more muscle, while humps over the withers tend to hold more fat, which is a storehouse of calories to help the animals get through leaner months.

On the other hand, some of our cattle relatives are just not cut out for cold weather. The water buffalo, for example, is a true buffalo (which bison are commonly called although they are not buffalo) and needs a watery mud hole to cool itself daily. It has very few sweat glands and lives only in tropical climates.

Domestication of cattle is relatively recent, occurring around 7,000 to 9,000 years ago. It has had a distinct impact on the shape of our civilization as well as the demise of the wild ancestors. We are not able to revive the extinct species of wild aurochs and other cattle relatives killed off by hunting and lost habitat, which makes it very difficult to observe wild cattle behavior. What we can do is observe a herd this winter, and watch for natural adaptations and instincts to kick in.