What Can Cause Sudden Death In The Chicken Coop?

Finding a dead bird without any clues pointing to a predator can be alarming. Here are some common causes of chicken death in backyard flocks. 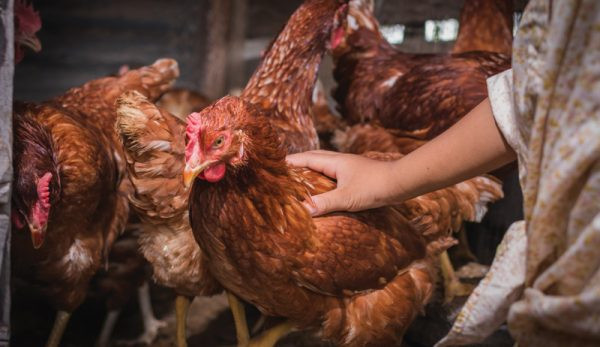 Recently, my husband found our Gold Laced Wyandotte rooster, Hercules Mulligan, lying near the feed bins without a mark on him. He was fine the day before, and now he was gone.

Why? We didnâ€™t have an answer for this chicken death apart from the fact that he was walking oddly for several months.

Weâ€™ve kept chickens for almost 20 years now, and weâ€™ve faced similar events before. But itâ€™s always upsetting. As usual, we began to wonder what had happened. Could we have done something about it? Would more deaths follow or was this a one-off?

To get some answers, I turned to Yuko Sato, DVM, from Iowa State University.

Little or No Warning

Itâ€™s difficult to understand why a chicken looks healthy one day and experiences death the next. Sato says that this is because birds are prey animals, and so they have to be stoic about how sick they are until they are just about to die, which makes treating them difficult.

An unexpected chicken death, such as our roosterâ€™s, is an upsetting thing to experience. But itâ€™s also something that chicken-keepers have to accept.

Can you call a vet when you have a sick chicken?

You certainly can, if you can find one. Poultry veterinarians or livestock veterinarians who know how to treat poultry are few and far between.

â€śI offer an elective on backyard poultry health for veterinary students,â€ť Sato says. â€śBut most students studying poultry are interested in working in the industrial side. So field visits to hobby farms arenâ€™t very common.â€ť

There is help available, however. The Association of Avian Pathologists has information for chicken owners like us. You can also contact your official state agent through the National Poultry Improvement Plan has a list of officials within your state.

Most states have a healthy bird help line, too. You can also ask for help if youâ€™re curious about why your chicken died, if youâ€™re worried that itâ€™s something that will spread to the other chickens or if you seek a way to prevent the same death in the future.

Youâ€™ll likely have to pay for a postmortem. Sato says to report chicken deaths to your state agent if you have had multiple deaths within a short span of time.

A necropsy can help you determine an unexplained chicken death.

The findings demonstrated the importance of educating owners on disease prevention and biosecurity practices.

Researchers found that 42 percent of chicken fatalities were caused by cancers. Of that percentage, 63.4 percent was due to Marekâ€™s disease or leucosis/sarcoma group.

Marekâ€™s is a highly contagious fatal disease characterized by T-cell lymphomas and peripheral nerve enlargement, according to the Merck Veterinary Manual. Chickens are the natural hosts for the virus. As such, Marekâ€™s is a worldwide problem, with every flock presumed infected.

Only strictly managed pathogen-free flocks are free from the virus.

â€śMarekâ€™s is caused by a herpesvirus,â€ť Sato says. â€śThe virus gets shed in feather dander, and itâ€™s impossible to clean that out of your coop. If it causes cancer is another story because there are three types of Marekâ€™s and only one causes cancer.â€ť

Sato says that this type is weakened so it isnâ€™t harmful. But because the vaccine is a living virus, itâ€™s difficult to keep (it has to be stored in liquid nitrogen) and expensive. So itâ€™s normally given to commercial birds, although some large hatcheries use it.

Here’s what to do if you experience the death of a chicken during the winter months.

When you purchase your chicks, ask the hatchery if they offer a Marekâ€™s vaccine and, if so, which one. Also inquire about vaccinations during chick days at your feed-supply or big-box store. Donâ€™t assume it as a given.

If no one at the store knows the answer, assume the chicks are unvaccinated. If you decide to buy the birds regardless, understand that your new chicks will have no immunity to the disease.

Chicks have to be vaccinated before they are 1 day old because the vaccine will not work if the bird has already been exposed to Marekâ€™s. The vaccination costs about 20 cents a bird, so itâ€™s not worth skipping. In some of the bigger producers, the chicks are vaccinated in the egg.

Additionally, Sebrights and Barnevelders are more susceptible to the disease than other breed, such as Marans and Sumatras, which very rarely contract Marekâ€™s.

Unfortunately, vaccinated chickens can sometimes contract Marekâ€™s as the virus can overpower the vaccine or because the vaccine has been given improperly. Marekâ€™s can strike a bird at any stage of life.

â€śA 2-month old chick can get lymphoma due to Marekâ€™s,â€ť Sato says.

Ovarian cancers make up 27.8 percentÂ  of this No. 1 category. â€śCancer is any cell multiplying out of control,â€ť Sato says. â€śA laying henâ€™s ovaries are always active. Inflammation can set in or a reaction can happen, and from there cancer can develop.â€ť

More than 36 percent of fatalities in backyard birds stem from infectious diseases (from bird to bird, not from bird to human).

MG is also known as chronic respiratory disease. Birds with MG might not show symptoms at all, but some can. Signs can include sneezing, nasal and eye discharge, and rales (rattling sounds in the lungs).

MS affects the respiratory system, but it can also affect the joints. In addition to the same symptoms of MG, MS infected birds can demonstrate stiff movement, swollen joints and lethargy.

Infected chickens carry the diseases for their entire life. Contaminated equipment, wild birds and rodents can carry MG and MS, so biosecurity and cleanliness is important.

Viral infections (again, from bird to bird), accounted for 7.3 percent of the total number. IBV (infectious bronchitis virus) is a very contagious (for birds) coronavirus that causes tracheal lesions and upper respiratory disease. It affects the poultry industry widely and was the top virus found in the study. Symptoms include sneezing, coughing and rales. IBV is very difficult to control.

More than 16 percent of the study was generalized noninfectious diseases. Of these, fatty liver hemorrhagic syndrome was the top culprit. This syndrome only affects hens and is thought to be caused by overfeeding.

It may also be caused by a calcium deficiency, stress or feed contaminated with the mycotoxin aflatoxin.

With fatty liver hemorrhagic syndrome, the liver becomes fat, and as a result damages easily. Fatality occurs when the liver ruptures and causes internal bleeding. This commonly occurs in caged laying hens.

You can help prevent this disease by offering calcium to the diet, changing feed and regulating food consumption.

Check out this helpful infographic about biosecurity.

The study found that 1.6 percent of birds died from zoonotic bacteria (bacteria that can transfer to humans): Paratyphoid salmonellae, Mycobacterium avium, Listeria monocytogenes and Campylobacter jejuni.

They also found evidence of lead and other heavy metals, which can transfer to eggs and meat, and one case of botulism.

People often worry about contracting influenza from their birds, but Sato cites a low rate of that happening in the U.S.

â€śWeâ€™ve heard about people in China and Hong King dying from bird flu,â€ť she says. â€śBut this is due to people living in their houses with their chickens.â€ť

Sato says our rooster could have had a mass pressing on his nerves, which caused that odd, high stepping gait. I felt relieved to realize we couldn’t have prevented it.

In the end, we knew we had given our guy a place to live, with a flock of sweet hens that adored him. He was a very lucky rooster.

Diseases due to poor management and nutrition only amounted to 9.7 percent in the study. You can do your part to keep your chickens healthy by:

These preventative measures will go a long way toward easing your mind when youâ€™ve had a sudden, unexplained chicken death.

If you donâ€™t have a local vet that can help you diagnose a recent death, contact one of the following.