Causes And Treatment Of Splayed Leg

This common chick ailment can easily be remedied with items found in your first-aid kit. 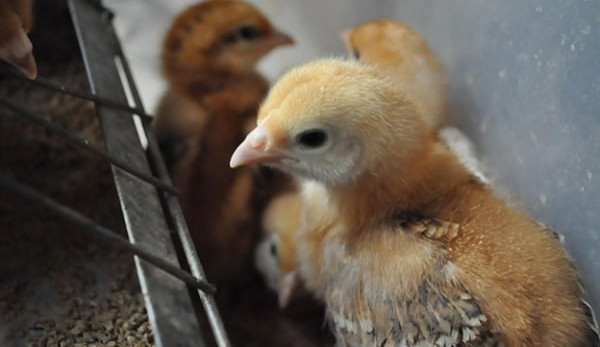 One of the most common injuries in young chicks is splayed leg or spraddle leg. A chick with splayed leg is unable to walk and uses great effort trying to move around. The inability to move well can fool a novice chicken keeper into believing the bird has suddenly become sick. Whatâ€™s worse is that without proper treatment, a chick can die because it hasnâ€™t been able to access food and water on its own. Splayed leg requires immediate help.

Splayed leg is an indicator that something might have gone wrong during incubation. A fertilized chicken egg has very specific heat and humidity requirements in order for the chick inside to develop correctly. If one of those conditions is interrupted, or the incubator malfunctions, a chick can hatch with splayed legâ€”its leg muscles are not developed enough for it to stand without help. This chick will hatch with the condition and it will be unable to stand on its own from the time it hatches until you intervene.

Sometimes chicken keepers unintentionally create conditions than can injure a chick. A healthy, seemingly vigorous chick can injure its tender leg muscles on a slippery surface. Like a person slipping on ice, a young chicken can easily slip on newspaper or cardboard used as bedding. Not using appropriate bedding materials, plus an inability to diagnose an injury, can cost a chick its life.

Treating splayed leg is shockingly simple. To support the injured chickâ€™s legs, the legs need to be splinted to hold them where they would normally stand. The splint needs to be loose enough that the bird can move around uninhibited. Iâ€™ve seen two types; both are easy to fashion with things you might already have around the house.

Splinting a chickâ€™s legs will require two people. To ensure the chickâ€™s safety and to provide full access to the food and water, it should be isolated to its own warm space for at least one full 24-hour period. Injured chicks are often bullied and forced away from food and water from more dominant birds, so isolation is important.

Bandage tape sticks to itself without being sticky to anything else. Cut a thin strip of the bandage tape and wrap it around the chickâ€™s legs near the feet. The wrap will stick to itself in between the legs, but it will remain loose around the legs. It should not be tight around the legs, and it should not pull the legs together. The splint should provide just enough support to allow the chick to walk while the muscles grow stronger.

Feed a soft hair tie or soft rubber band through a very short length of straw. Each end of the elastic goes around a foot, and the straw rests between to hold the elastic on the feet without ever touching the legs. Consider using a paper straw instead of a plastic one, just so that itâ€™s softer if the chickâ€™s legs do touch it.

Monitor the chick carefully while itâ€™s wearing the splint, making sure its movement is easy and comfortable and that it has full access to food and water until itâ€™s strong and able to rejoin the flock.

Never use anything with a smooth surface in your brooder. Baby chicks need some traction under them while their muscles are developing and until they are strong. Non-skid â€˜fabricâ€™ often used to line kitchen cupboards is a great floor liner for a small chick brooder. It can be covered with a layer of wood shavings or paper towel for absorption.