The Cayuga is a prolific duck and can lay 100 to 150 eggs per year. They are known for their flavorful meat, ideal in dishes such as duck confit. 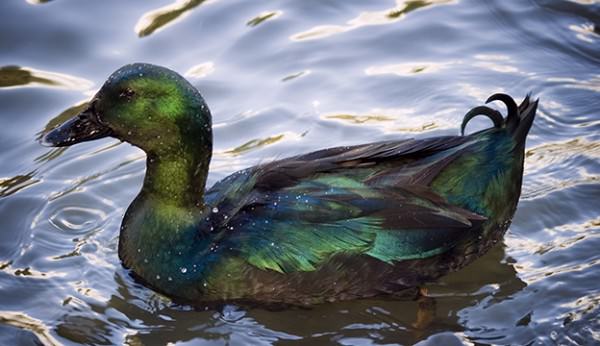 Uses: The Cayuga is a prolific duck and can lay 100-150 eggs per year. Eggs are initially black in color, but as the season progresses egg color lightens to light gray, and then to white by the end of the season. They are known for their flavorful meat, ideal in dishes such as duck confit.

History: The Cayuga duck breed was developed from a pair of wild black ducks that a miller in Duchess County, New York, caught on his millpond in 1809. The birds were pinioned to prevent them from flying away, and afterward promptly settled in to life on the miller’s pond. The pair raised large broods, providing the miller’s family with flavorful meat. Some of the decedents of these birds were brought to the Finger Lakes region of New York in 1840. These ducks became popular in northern New York and were named “Cayuga” after the native people of that area. By 1874 the Cayuga duck was accepted into the American Poultry Association’s Standard of Perfection.

Conformation: A Cayuga’s bill is black with occasional olive tips and the feet are black to dusky black that may acquire orange shading later in life. The plumage of the Cayuga is uniformly greenish black and may become mottled with white as they mature. The meat of these birds is of fine quality, but the carcass can be difficult to clean because of their dark feathering. Some resolve this problem by skinning the ducks rather than plucking.

Special Care/Notes: The Cayuga, to this day, is recognized as one of the hardiest of the domestic ducks and are easily tamed if hand-raised. They tolerate the harsh winters of the northeast and can produce many offspring. The Cayuga averages 7-8 lbs. and has the ability to obtain much of its diet from foraging, when given appropriate areas to explore for food. ALBC’s 2000 census of domestic waterfowl in North America found 1,013 breeding Cayuga.