Celeriac: The Autumn Vegetable You Should Be Growing

This under-rated root vegetable rarely makes an appearance on our dinner tables—but it should! 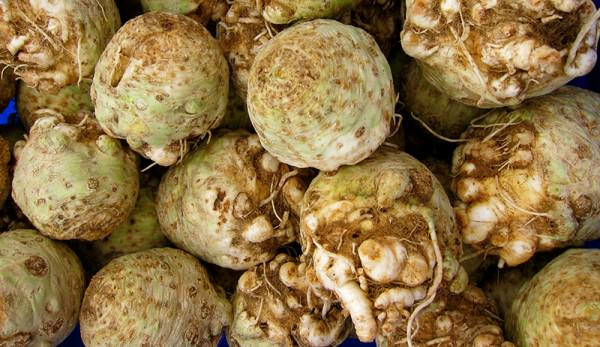 If celeriac hasn’t yet found its way into your garden plot, you’re missing some good stuff. This surprisingly tasty bulbous root can be eaten fresh in salads or cooked and used in soups and stews.

Celeriac, also called celery root, might not be very pretty, but it sure is tasty. Beneath its gnarled and knobby skin, the flesh of celeriac is pure white, meaty, and oh so delicious. It’s a staple of my kitchen during the winter months, when so little fresh garden produce makes it to our table.

Celeriac requires a very long growing season, upwards of 110 to 120 days from sowing. Seeds are planted indoors, under lights, in late winter and the transplants are nestled into the garden just after the danger of frost has passed. It will take several months for the seedlings to show signs of ample growth, but by the time early autumn arrives, the bulbous roots begin to swell rapidly. Throughout the growing season, celeriac requires ample moisture, so mulching it with an inch or two of straw is a good practice. You’ll also want to remove the small side shoots that develop on the bulb throughout the season. These side shoots sap energy from the main bulb, often leading to a reduced size.

By the time October rolls around, your celeriac crop will be ready to harvest. After a few light frosts, you can either cut off the greens, dig up the bulbs, brush off the dirt, and store them in a root cellar for a few months, or you can mulch the plants with a foot or two of straw or shredded leaves and pull the roots from the garden on an as-needed basis. We’re often still harvesting the last of our celery roots as late as mid-March.

To prepare celery roots for the kitchen, you’ll need to peel them. The skin is very tough, so use a good, sharp knife and use caution. Store peeled roots in water to keep them from turning brown. Below, you’ll find my favorite recipe for preparing celery roots—though I’m a huge fan of celery root slaw, too!

Fill a large saucepan halfway with water and bring it to a boil. While the water is heating, peel and scrub the celery roots. Before they have a chance to brown, slice them into 1/2-inch-thick rounds, and drop the rounds into the boiling water. Reduce heat to medium-low and simmer until the celery root is just fork-tender, about 8 to 10 minutes.

While the celery root is boiling, put the flour in one bowl, the eggs in another and the bread crumbs in a third bowl.

Drain the cooked celery root rounds, and while they’re still warm, dip the rounds in the flour to coat both sides. Then dip them into the egg, and then into the bread crumbs. Set them aside in a single layer on a large plate.

Once all the rounds have been breaded, melt the butter in a large skillet over medium heat. Once hot, gently place the breaded rounds into the skillet. Sauté them on both sides until golden brown, 5 to 7 minutes per side. Set each cooked round on a platter and season with salt and pepper, and sprinkle each with chopped parsley.