The Teamwork Of Centipedes & Millipedes Benefits Your Garden 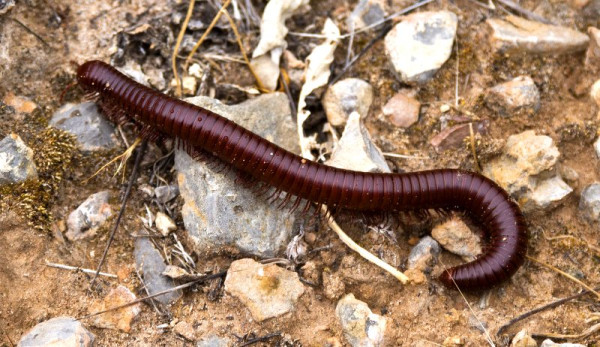 When you turn over over soil, logs or mulch, doing so might reveal a many-legged creature scurrying to hide in the dark earth. Curious about these creepy-crawlies? You should be. The more we understand about these insects, the more valuable they become in the gardening game. Think of centipedes and millipedes like teammates working together to turn unwanted pests and waste into rich, fertile soil. Each plays a distinctly separate, yet equally crucial role in the soil-building natural process.

Although they are found all over the world in all types of climates, centipedes and millipedes need a moist microhabitat. Their bodies lack a waxy covering on their exoskeleton, which other insects and spiders have. Even their ammonia-like smell is a reason they need a moist home; they excrete nitrogen, which requires extra water. They are prone to dehydration, which explains why centipedes and millipedes are usually discovered underneath things such as logs, leaf litter, topsoil and rocks.

Centipedes are nocturnal carnivorous hunters, well-equipped for the job of paralyzing prey with two claw-like appendages. These modified legs are tipped with venom powerful enough to cause a painful, swollen wound on humans, comparable to a wasp sting. People with allergies to bee stings should take special precautions. No wonder they are very effective as population control for snails, spiders and any soft-bodied insects such as grubs and earthworms.

Who eats centipedes in your garden? In this case, some of the prey turn out to be the centipedeâ€™s predators as well. Salamanders, large beetles, spiders and snakes as well as the omnivorous opossum can keep the centipede population in balance.

With their fused leg segments, it would be more accurate to call millipedes diplopods, after the scientific class name Diplopoda, which means â€śdouble foot.â€ť Even with double the feet, millipedes are generally slower than centipedes and easy to catch. While they present no painful threat to humans, they can cause skin irritation with a toxic gas they emit through their pores. Itâ€™s not a good idea to handle them with bare hands. If you were an ant or other small predator, this musky irritant would sting your eyes and repel you. Primates have been documented provoking millipedes, just to use their secretions as natural insect repellent. But donâ€™t try that at home!

Excellent herbivorous shredders, millipedes are some of natureâ€™s best recyclers. Specifically, they are detritivores, eating all kinds of debris, and pooping out the minerals from leaf litter, grass clippings, food scraps, finished crops and dead animals. They are just one of many players on the break-down team, however. Millipedes tear up the parts into smaller parts. Then the essential decomposers in the soil, such as bacteria and fungi, take over and digest the compostables into rich soil.

Centipedes and millipedes play roles that benefit the garden. In the soil food web, the centipede is the top predator, and the largest terrestrial invertebrate. Comparable to the tiger of the rainforest or the killer whale of the sea, this apex position holds great power in the stability of the community. The top predator limits populations of smaller animals, which in turn affects the whole ecosystem.

The distant relative of the centipede, the millipede plays an important role, even if it is less dramatic. If you live in a place without earthworms, the millipede can fill their niche. Not only are they responsible for decomposing as much as 10 percent of the leaf litter in a garden, they benefit other soil microorganisms that work intimately together to turn debris into nutrient-rich soil.