If you’re burning for a supplement to give your chickens, try lighting up some hardwood. 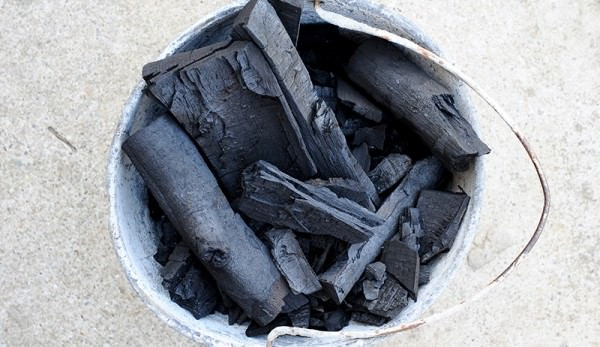 If you’re new to keeping chickens, chances are you want to feed them treats. While you can easily run out to a feed-supply store and purchase a variety of goodies, searching around your homestead will certainly yield all-natural snacks for your flock. Charcoal is a great example.

I know what you’re thinking: We don’t immediately connect chickens and charcoal in our minds, but charcoal can provide health benefits, from improving the strength of your hens’ eggshells and ridding their bodies of toxins to reducing the amount of ammonia in your flock’s manure. For humans, it means healthier hens, better eggs and a higher-quality fertilizer.

My family started offering charcoal to our chickens after a fire took one of our barns a few years ago. After the charred cypress and pine beams cooled, we noticed our flock pecking the burnt wood, and I had to know why.

I discovered that it binds with toxins, such as poisonous berries or weeds our flock might naturally pick up during the day, and then the chickens can then pass these poisons through their system, diminishing the toxic effects. If one of your birds has eaten something that isn’t agreeable, it might naturally seek out charcoal as a remedy. Ever since our charcoal encounter, we’ve provided it to our chickens as part of their daily ration and have been rewarded with a healthier flock.

Wild animals naturally gravitate toward charcoal and chew on it as a way to rid their stomachs of toxins. “Wildland Fire in Ecosystems” (2000), by the USDA Forest Service, states that “some vertebrates and many insects are attracted to burning areas … to forage and entering recent burns to feed on charcoal and ash.” It’s not a stretch to provide it to your poultry flock as a healthy addition to their feeding program.

Charcoal is also used traditionally to reduce diarrhea in chickens, and our ancestors relied on it as a way to prevent and remedy coccidiosis, a gut infestation of naturally occurring parasites in soil that can cause bloody stool and eventually death. Left untreated, coccidiosis can devastate a flock.

In “Feeding for Eggs,” an agricultural bulletin published in 1909, prominent poultry breeder James Dryden, who was also the head of the Department of Poultry Science at Oregon Agricultural College (now called Oregon State University), wrote: “Charcoal is a bowel regulator, and most of the successful poultrymen feed it regularly. It may be kept in a box or hopper where the fowls can eat it at will.”

In modern times, studies by the Japanese Society of Animal Science have shown that chickens offered charcoal mixed with vinegar as part of their diet laid eggs with more collagen in the membranes, and the eggshell itself was stronger and healthier. If you frequently find eggs with thin and brittle shells in your nest boxes despite offering a calcium supplement, wood charcoal might be the answer you’ve been looking for.

Before going further, let’s first talk about what kind of charcoal is appropriate to feed your flock. When you think of charcoal, you likely think of the briquettes you buy when you want to barbecue. These aren’t the same as natural charcoal, and you should never feed these to your flock because they won’t provide any health benefits and usually include a large dose of potentially toxic lighter fluid.

The best type of charcoal to offer your flock is derived from natural wood that has been burned without sufficient oxygen until it’s covered by the familiar black substance. But before you run out and grab the stray 2-by-4 left over from your last home repair project, consider the quality of the wood. Has it been exposed to dangerous chemicals? Has it been painted or treated? If so, avoid using it.

Ash from your woodstove might also spring to mind, but it’s best to avoid feeding it to your flock as well, as it won’t necessarily contain wood charcoal or provide the same benefits. While charcoal is able to absorb and filter toxins, wood ash, which is simply the residue from burnt wood, can’t. If you burn anything besides wood in your stove, such as paper, plastic or other trash, the wood ash can also contain poisons or chemicals that could harm your chickens.

On the other hand, natural hardwoods, such as dead branches that have fallen or that old tree stump you need removed, are perfect. There’s no clear indication that one type of wood provides more benefit to chickens than another. If oak is the only natural hardwood available to you, or you had a tree trimmer remove a maple branch hanging over your house, it’s ready to become chicken charcoal.

To make charcoal in your own backyard, first make sure you’re allowed to burn wood in your town. Next, find an area away from anything that can be damaged by fire.

Hardwoods, such as oak, are the best. Chop the wood into 2- to 4-inch pieces, and pack them into a small metal container (roughly gallon-sized) that can fit into a large metal barrel (approximately 55 gallons) that’s open on top and has several 2-inch holes drilled near the bottom. Because charcoal is created from a fire without much oxygen, you need to create an environment where oxygen and fumes can escape but not return into the fire.

Place the smaller container with wood upside down in the large metal barrel. Ignite a fire by using natural substances as starter, such as dry grass or hay. Avoid lighter fluid, diesel, gasoline or any other types of chemical fire starter. Once the flames have engulfed the interior metal container, allow it to burn for three or four hours until the fire is gone and the barrel and container are cool.

Offer your flock the charcoaled wood once it’s cooled down: You can either scrape flakes of it off the wood and mix with their feed or offer it separately. We’ve tried both ways and have not found one way is better than the other.

If the charcoal you harvest is powdery, or if you use activated charcoal, which is charcoal that has been treated to increase its adsorptive capabilities, consider mixing 1 cup of the charcoal with 1/2 cup of water or apple cider vinegar until a thick slurry is formed. If you don’t, your flock could accidentally inhale the powder, which might negatively affect their delicate respiratory system.

If you’re worried your chickens won’t appreciate their new treat, rest assured that if your birds can reach it, they will taste-test the charcoal. Chickens are naturally curious about their environment, so they’ll check it out quite readily, and once they’ve realized it’s beneficial, they’ll keep coming back.

In addition to providing physical health benefits to your chickens, charcoal can improve their environment and create a better fertilizer for your garden. Studies conducted by Casey Ritz, a University of Georgia Cooperative Extension poultry scientist, indicate that when charcoal is mixed with feed at a 1 percent ratio, it reduces the ammonia in chicken manure.

When your chickens eat charcoal, the uric acid in their manure binds with it, producing a less-harmful ammonium instead of ammonia. Chickens that were fed charcoal with their daily ration were healthier overall with better weight gain and shinier plumage, and they had less difficulty breathing because they weren’t inhaling in the same noxious fumes as other flocks that were not -provided the charcoal.

This yielded a more nutritious fertilizer for gardens and created a healthier environment for hens that were cooped up all day. While chicken manure is one of the best fertilizers out there, the high levels of nitrogen in it can burn your plants.

In the coop, ammonia from manure can harm your flock’s lungs. Damage caused by ammonia is a concern for chicken owners in every season, but it’s a particular problem in winter, when hens don’t want to go outside, preferring to remain indoors where it’s warmer. Even if your flock free-ranges, it will still benefit from a coop kept as free of ammonia as possible.

If you include charcoal in your flock’s diet, you will soon reap the benefits. Chickens that are offered charred wood as part of their diet are overall healthier, produce better fertilizer for your gardens, live in a cleaner environment and might even suffer less from certain diseases.

Crafting charcoal in your own backyard is simple, and if you haven’t yet profited from offering charcoal to your chickens, it’s about time to include it in their diet.

Maat van Uitert is the founder of the backyard chicken website FrugalChicken (www.thefrugalchicken.com) and creator of "Healthy Coop Boot Camp," an online course for new owners about raising backyard chickens. She lives on a Southern homestead with her husband, two children and an ever-growing flock of chickens.