Chasing Chickens: A Deadly Debacle In The Dog Kennel

New chicken-keepers make common mistakes, such as this tale of chickens escaping a dog kennel during cleaning. In the end, though, missteps can teach important lessons. 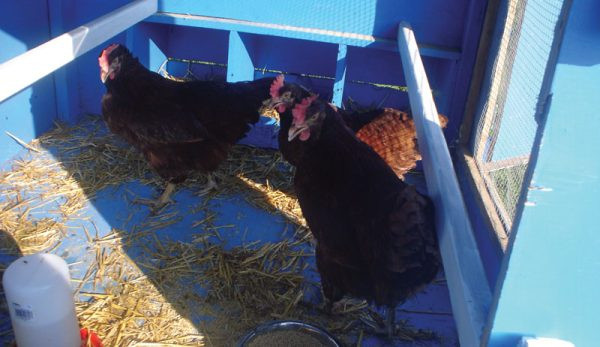 ‚ÄúYou should get laying hens,‚Äù my 13-year-old niece said in the spring of 2019. I thought about that idea for a while and decided it made sense. On June 3, 2019, I purchased four Production Red baby chickens from L & M Fleet Supply in Detroit Lakes, Minnesota.

When I got the chicks back to the farm, I put them in a blue tub with a netting cover inside my old trailer house.¬Ý

The Trouble with Chickens in the Dog Kennel

The chickens were thriving until I decided to clean out their tub. This event happened on June 18, 2019.

First, I put the chickens in a small pet carrier, then, I put them inside a pen inside my dog kennel and opened the door. The chickens squeezed through the wires in this pen, so they were running around inside the dog kennel while I cleaned the blue tub.

After getting the tub and feeders situated back in my trailer, it was time to put the chickens back.

I caught two of the chickens and put them back in my trailer. The third one had escaped from the dog kennel, and I couldn‚Äôt find the fourth one. Angel, my Chihuahua, was watching and chased one underneath my trailer. I got Angel out because I didn‚Äôt want her to catch the chicken.

After looking underneath my trailer in various places, I couldn‚Äôt see any chickens, so I let Angel out again.

At this point, I decided to get a pole to reach between the trailer tires. Before I got back with the pole, Bella, my Beagle, came with a chicken in her mouth. I told her to ‚Äòdrop it,‚Äô and I caught it and put it back in my trailer. Chicken No. 3 seemed to be OK, so I put it back with the other two.

After going back to retrieve the pole from where I left it, Bella came with another chicken in her mouth. I also caught this one, but it appeared to be injured, so I put it in a separate place from the others. I put the pole back and did some chores. When I went back to check on the chickens, Chicken No. 4 had perished.

This whole experience with Bella, Angel and the chickens gave new meaning to one of the craft projects I was working on. It was a wall-hanging with the saying ‚ÄúThank God for Dogs‚Äù on the front. I was ready to give up on finding the last two chickens, but Bella and Angel helped me get them all accounted for.

The dead chicken also taught me a lesson. If I had not opened the door to the pet carrier in my dog kennel, my four chickens would all be alive. The next time I clean out the blue tub, I won‚Äôt open the pet carrier door.

Read more: Check out these brooder tips for baby chicks!

As the three remaining chickens grew, I knew it was time to move them out of my trailer. I tied chicken netting to the inside of the pen inside my dog kennel with twine. The chickens lived in this pen until the weather became cold.

Then, they were put in a pen inside my dad‚Äôs barn for the winter.

On Oct. 26, 2019, I discovered two brown eggs in the chicken pen. My chickens had become laying hens. They have laid eggs mostly every day since then.

After the loss of some of my pets from November 2019 to January 2020, I decided I wanted more animals to take care of. My parents were supportive of me getting some more chickens. On June 4, 2020, I purchased five White Leghorn chicks from the same place as my brown chickens the prior year.

The white chickens started their lives on the farm in the same blue tub with a netting cover inside my trailer as their brown counterparts. As they grew older and bigger, I put the white chickens in the pen inside the dog kennel.

The tarp roof in this pen didn‚Äôt survive the winter, so my father helped me put a roof on the dog kennel. The leghorns fly back and forth between this pen and the dog kennel and have also used the doghouse.

Bella and Angel passed away, and there are two new dogs on the farm. Sparky and Reynbo run around the outside of the dog kennel trying to chase the white chickens. The chickens run around inside the kennel while the dogs are ‚Äúchasing‚Äù them.

Who knew that when I bought my first laying hens that my dogs would be involved in the chicken-raising operation?¬Ý

This article originally appeared in the January/February 2022 issue of¬ÝChickens¬Ýmagazine.

Chicken Chat is a reader-submitted feature in every issue of Chickens magazine. Email the story of your chickens in about 750 words to chickens@chickensmagazine.com (subject line: Chicken Chat). Be sure to include high-resolution images or photos of yourself, your chickens and/or your coop. The author of each issue‚Äôs published essay will receive a special farm sign and T-shirt from Stromberg‚Äôs Chickens and Game Birds Unlimited. See magazine for rules.