When Red first came to live with us, we viewed him as just a mellow older Quarter Horse, the kind you could put little kids and adult beginners on without a worry. The friend we got him from told me that he had royal cutting horse bloodlines, but I figured he probably just didn’t have what it took to be a cutting horse. 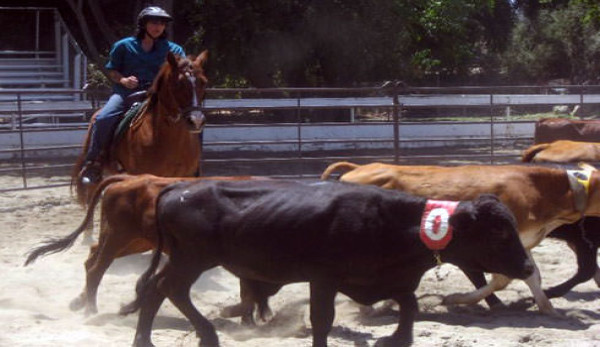 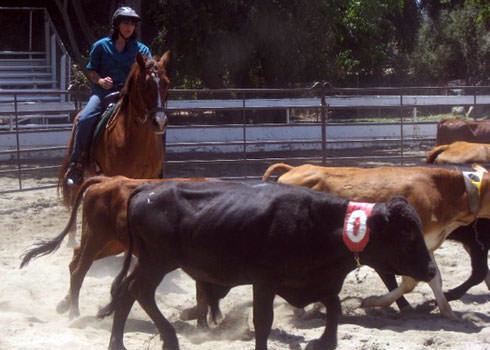 Red and I tried our hand at ranch sorting.

When Red first came to live with us, we viewed him as just a mellow, older Quarter Horse, the kind you could put little kids and adult beginners on without a worry. The friend we got him from told me that he had royal cutting horse bloodlines (his paternal grandsire is Freckles Playboy, a world champion, and his maternal grandsire is Nu Bar, who sold for $1.1 million at auction), but I figured he probably just didn’t have what it took to be a cutting horse and so ended up as a trail mount.

One of the first things I did when we got Red was join the American Quarter Horse Association so I could look up Red’s owner history. It’s cool being able to put your horse’s name in the AQHA website search engine and see all the people who owned your horse before you.

The Internet being what it is, I started Googling the names on Red’s past-owner list. I managed to find an email address for a woman two owners ago, and I sent her a note telling her that Red was now living with me.

I was beyond excited when I got her reply. She told me that Red had lived for 12 years on a working cattle ranch in central California, and was an amazing cattle horse. His career there ended when the ranch was sold, and he ended up passed around to several owners before he landed with me.

So when my friend and riding instructor Lisa suggested we sign up for a local ranch sorting competition in town, I jumped at the chance. I would ride Red and see what he could do with those cows.

Ranch sorting is a lot like shooting pool with cattle. The cows are numbered, and you and your horse have to get a designated cow from the herd into an adjoining pen with the help of a buddy on horseback. Cows like to stick together, so getting the right cow out of the group and into a pen by itself is no easy task. You need a good horse to pull it off.

When it was Lisa’s and my turn to go in there and sort some cows, I felt an adrenaline rush. Lisa was going to “work the gate,” meaning she would stand guard between the two pens to make sure the cow that was captured stayed put while more where gathered in numerical order.

When the buzzer sounded, I asked Red to push into the herd of numbered steers and he didn’t even hesitate. My normally mellow-to-the-point-of-lazy old horse suddenly came to life. He seemed to read my mind about which cow I wanted and help me drive the critter away from the group and toward the other pen. When we isolated the cow from the group and tried to push it forward, it tried to arch around to rejoin the herd. But Red was all over it. He dashed forward to form a blockade before the cow could get too far from the gate.

After several runs, we managed to get enough cows in the pen to warrant a third place ribbon. Not bad for a couple of novices. Oh, except for Red, who was clearly a ringer.