Beth Conrey from the Colorado-based Bee Squared tells us how an infatuation with insects as a kid put her on a path to beekeeping. 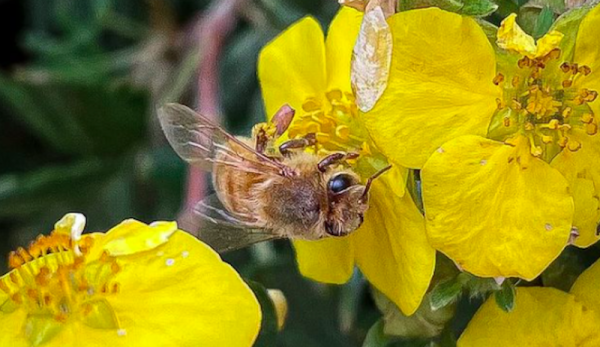 “I was always a bit buggy as a kid,” says Beth Conrey as she looks back on her journey to becoming the owner and beekeeper of the Berthoud, Colorado-based Bee Squared. “I collected insects for years while I participated in 4-H.”

After a detour working in corporate America, Conrey wound up returning to the world of insects after reading a column in the local Berthoud Recorder newspaper by a honey farm owner named Tom Theobald.

“He was a beautiful writer on many fronts but particularly on his love of bees,” says Conrey. “He triggered my interest, and for that I shall be eternally grateful.”

After taking some beekeeping classes, Conrey picked up a couple of hives. She “just kept going” until becoming a proud “bee addict.”

We spoke to Conrey about how to achieve colony success and her company’sÂ award-winning fennel pollen honey. We also touched on the potential for bees to do math.

Bee Squared’s fennel pollen honey recently won an accolade at the Good Food Awards. Conrey says that the idea for the honey came from her old boss, Bob Patrick.

“He has always had a terrific palate, and he began working with me on different flavor profiles for infusions,” she explains. “He put together fennel pollen and honey. I knew he had a winner as soon as I tasted it. The taste is synergistic!”

Read more: Beekeeper and Tik Tok superstar Erika Thompson is all about the bees!

“I have also been putting it on a pizza that Iâ€™ve been modifying from a restaurant called Origins in Loveland,” she continues. “It has a pistachio cream sauce, Italian sausage, fresh mozzarella and a few other ingredients. I drizzle the fennel pollen honey on it, and it is delicious!”

Conrey adds that she’s taken inspiration from chef Yotam Ottolenghi’s pairing of grilled grapes with burrata and worked some fennel pollen honey into the blend. She also suggests it might be a “fabulous” addition to a gin-based cocktail.

“In Colorado we have over 900 species of bees,” says Conrey as she looks over her hives. “I manage honey bees, which differ from the rest of them because they are a colony insect.

“All the rest of those bees are solitary and, thus, lack the ability to produce honey in quantity. The key to colony success is consensus and, as humans, we would do well to emulate it.”

Read more: Ready to start or expand your hives? Check out these tips for purchasing bees.

Can Bees Do the Math?

Asked about some of her favorite bee behavior facts, Conrey says, “Bees can count to four [and] bees understand the concept of zero.”

Reflecting on her years surrounded by bees, Conrey says that she remains “totally fascinated by them. I learn something new from them [and] about them every day.”

Conrey adds that each colony also displays its own personality. “While they are not a pet, I do have favorites,” she says. “Most people donâ€™t think of bees as having personalitiesâ€”but they do.”