In Maine, raising chickens can be daunting, but putting the chicken coop and run in a greenhouse keeps things cozy and safe. 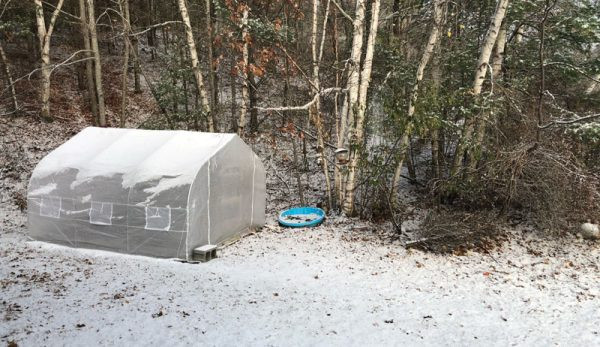 Like so many other hobby farmers, IŌĆÖm never really done with my chicken projects. In addition to the regular tasks of making sure they have fresh clean water, ample food and treats, clean bedding and enrichment activities, IŌĆÖm always looking for ways to improve their environment. I want to make sure that my hens have what they need, are safe and have room to roam.

As such, there is always more that can be done.┬Ā

In the spring of 2020, my wife and I moved into a new home. I, of course, couldnŌĆÖt take my chicken coop from my previous home, which was built onto the side of our barns. So not wanting to abandon my hobby of raising chickens, we needed a quick solution for the girls.┬Ā

We keep a small flock of between three and six birds, which provides us with more than enough eggs and plenty to give away as well. At the time of the move, we had just three chickens, a Black Australorp, a Rhode Island Red and a White Rock.┬Ā

My wife is always looking at reviews and hacks to see how various models of chicken coops have worked for other folks and what they have done to modify them when needed. Based on favorable reviews from other hobbyists with small flocks, we opted on a popular farm-supply setup. This was a quick solution to get the hens someplace where they could be protected.┬Ā

Once the coop kit arrived, I assembled it. Then I began to make some modifications in preparation of the natural elements it would be exposed to, both weather-related and from the local population of predators such as foxes. The first thing I did to amend the coop was to spray the exterior with a waterproofing solution. I then set about reinforcing the structure itself.

With added protection in mind, I stapled an additional layer of chicken wire over top of the wire mesh in which the coop was manufactured. I then gave the coop some additional support by adding boards to the exterior frame. This gives it more weight and stability.┬Ā

To prepare the site where the coop now sits, I laid chicken wire on the ground to help prevent animals from burrowing under the coop. As I continued to plan, I decided to put the coop up on a layer of cinder blocks for two reasons.

The roosting bar on the chicken coop out of the box seemed too low to make the chickens feel safe while perching. The layer of cinder blocks helped to raise this some, though admittedly not a lot. It does not sit the 4 feet or higher they would prefer to perch at in the wild.┬Ā

I wanted an additional barrier between the wooden frame along the bottom of the coop and the ground. This would help alleviate concerns of rotting wood by keeping the frame out of constant contact with ground moisture.

These hacks allowed me in good conscience to move our little flock into their new home for spring and summer. However, we knew that they would need additional protection and warmth for the upcoming Maine winter.

The Northeast isnŌĆÖt unique in having a lengthy winter season. Many here joke that there are only three seasons in Maine: winter, mud and preparing for winter.

But really, where we live, winters and cold weather predominate for nearly half of the year. We didnŌĆÖt want to leave our coop exposed to the harsher weather that would befall us in the coming months.┬Ā

Unlike the coop from our former home, which had the benefit of being attached to a barn that blocked the colder winter winds and provided some ambient heat, our new coop was free standing and did not enjoy such benefits. The solution, we decided, was to take a lesson from my years as a horticulturist and to put up a greenhouse structure to keep them warm.

Greenhouses are designed and utilized for their very ability to trap solar energy as heat. Light energy from the sun enters the greenhouse. Some of the energy escapes as light, but some of it is trapped and converted to heat energy.┬Ā

The greenhouse design that we selected was large enough to completely cover the coop with plenty of room to spare. It had a wide opening and six side-ventilation windows to allow for good air flow. By late summer, I had constructed this new greenhouse and put it in place to protect our coop from the winter weather while providing some heat for our flock.

Never content to leave anything be, I then set about adding additional support to this structure as well. I added six 2×4 studs for additional support, expecting there to be some amount of snow load at times. The support studs were set into cinder blocks. I then drilled a hole at the top of each one, zip-tying each to the center frame of the greenhouse.┬Ā

Angled metal brackets were added to each corner of the greenhouse frame to provide additional stability for the high winds and heavy snow that would inevitably come. I then put rocks around three sides of the greenhouse to weigh down the covering in an effort to prevent cold air from entering and as a further deterrent against predators.

As additional measures to keep our small flock warm and hydrated over the winter, I added a panel heater and a heated watering base to keep their water from freezing. I suspended the heating panel from the center support of the greenhouse frame and positioned it so that it would provide heat near the roosting bar area.┬Ā

Their waterer with the heated base was placed outside of the coop in the greenhouse area, to help prevent frostbite on our hens. Keeping it in the greenhouse portion, instead of in their actual coop, also aided in keeping their water above freezing temperatures. Exposed to more light, it absorbed more heat compared to the shade of the coop structure.

The greenhouse stood strong for its first winter. Each day, I would ventilate and close the structure depending on the weather. I would be sure to brush off the snow when it fell so that it didnŌĆÖt stress the structure. I also wanted to ensure the snow didnŌĆÖt block sunlight from entering and warming up the greenhouse.┬Ā

Once the temperatures started to warm up in the spring and early summer, I knew the greenhouse would potentially grow too warm for our girls. So, I then further modified the structure. I cut the covering at each of the corners high enough so that the two longer sides could be rolled up in order to allow air to flow more easily.┬Ā

I added chicken wire to the greenhouse frame where the plastic sides had been so that the chickens could not wander out and so nothing else undesirable could wander into the coop. Bungee cords proved to be the ideal fastener to hold the rolling sides. We could easily drop them back down if a cold snap occurred, and this would prevent heavy rain from entering their coop space.

Read more: You should consider getting a greenhouse of your own. Here’s why.

We are currently into our second winter at this home and the greenhouse is still standing, doing the job we hoped for. The plastic shows slight signs of wear around the upper frame where it rubs against the metal pipes.┬Ā

I made an additional modification for this current winter. In addition to reinforcing those weak spots in the plastic with heavy-duty tape, I added foam pool noodles to the upper frame of the greenhouse. This will prevent the screws in the frame pipes from poking through the plastic when snow sits on the structure.

I certainly donŌĆÖt expect this greenhouse to stand forever. It was after all just an online DIY kit and not meant to be a permanent structure. However, with some continued modifications, maintenance and care, I may get another couple of winters out of it yet.

That is, of course, until we opt to build a much larger and grand structure befitting our increasing number of feathered friends!┬Ā

Predators, especially foxes and even bald eagles, are abundant in our area. Anyone who raises free-range chickens knows how difficult it can be to lose one or more of your girls to a predator.

I understand itŌĆÖs part of the circle of life. Those creatures only do what they instinctively know to do. However, it doesnŌĆÖt make it any less heartbreaking to find the remains of one of the hens you have raised and whose personality you have come to know and appreciate.

As a result, we made the difficult decision to not let them free-range at certain times of year. Technically the greenhouse structure offered enough square footage per chicken, at least by textbook calculations. But it didnŌĆÖt seem like enough room to us, especially when they had been able to cover several acres unfettered.┬Ā

With that in mind, I built a few modular units to create a run for them. This expands their roaming space beyond just the footprint of the greenhouse and coop space. I could easily move the units as needed if we opted to give them some supervised free-range time.┬Ā

Additionally, if we choose to increase the number of our flock, itŌĆÖll be easy to add more of these structures to continue to expand the amount of room available to them.┬Ā

This article originally appeared in the March/April 2022 issue of Hobby Farms magazine.

Chris Bond is a professional horticulturist in Maine and has raised chickens since 2011.┬Ā