Deep in the heart of Texas, you'll find the DIY Doolens and their deluxe, hand-built chicken coop, complete with runs, gardens and more! 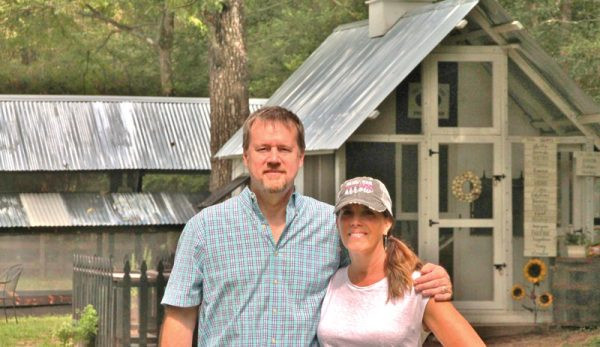 Nestled into Chrissy and Chris Doolen‚Äôs acreage, a retreat-style guest cottage emerges from the forest. No! What? On closer inspection, it‚Äôs a chicken coop!¬†

As DIYers, the Doolens started with a 30-by-40-foot garden in 2011. Then in February 2012, Chris built Chrissy‚Äôs 13-by-13-foot art studio. A metal smith, Chrissy is a professional artist who uses torches.

‚ÄúChris was really interested in getting me out of the house,‚ÄĚ Chrissy says with a smile.

And Chris was thinking ahead, considering a food shortage might repeat itself in the future.¬†

Chicken eggs seemed the ideal protein. But the Doolens live in the East Texas Timberland Region, which hosts more-than-can-be-imagined wildlife, including a diversity of raptors such as bald eagles. Herds of deer are everywhere.

The San Jacinto River Basin has lakes, creeks and swampy areas, too. So even alligators are on the prowl.

The host of predators required the hens be confined, and Texas weather necessitated sturdy chicken breeds. Plus, ever-the-artist Chrissy wanted a diverse, feathered flock, with a rainbow of colorful eggs.

She studied websites for ideas to design an artsy coop.¬†

‚ÄúWe had four to five coop design evolutions before we came to the intersection of ‚Äėyes, I can build that,‚Äô‚ÄĚ Chris says. ‚ÄúIt was all Chrissy‚Äôs idea. But if we were going to do this, I wanted to have fun. The chickens provide a sustaining, healthy food source for Chrissy, myself and our dogs and cats. It‚Äôs also satisfying that we accomplished this working together both from the design and fabrication perspective.‚ÄĚ

And who wouldn‚Äôt want a post-and-beam-style barn in their backyard?!

‚ÄúChickens have facial recognition,‚ÄĚ Chrissy says. ‚ÄúThey are rewarding and fun. But it‚Äôs also a commitment, hard work and difficult. And they come with a lot of poop and spiders.‚ÄĚ¬†

Of Chris, she never thought she could find someone who hears her and can translate her ideas into a tangible reality. ‚ÄúWe went overboard,‚ÄĚ she says. ‚ÄúBut knowing the chickens are safe makes all the extras worth it.‚ÄĚ

Read more: The pandemic era inspired chicken-keeping for a lot of people, including this family! 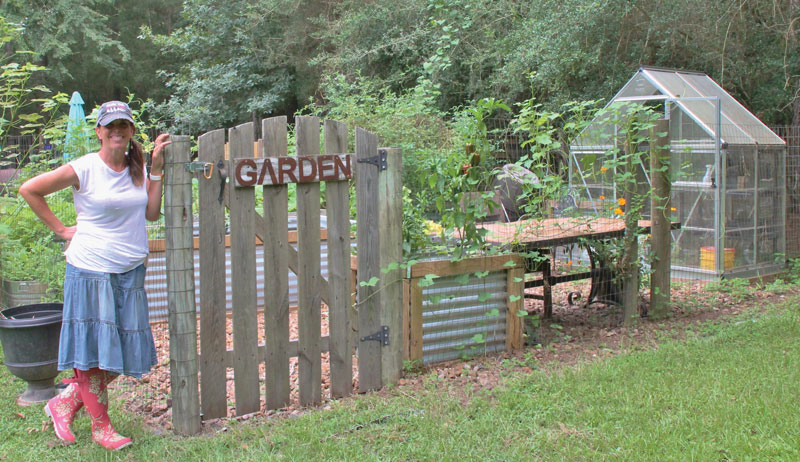 ‚ÄúI also use herbs around the coop and in the girls‚Äô nesting boxes,‚ÄĚ she says. ‚ÄúAnd I grow all sorts of vegetables for our family, plus watermelon.‚ÄĚ¬†

Chrissy gives the hens daily garden and leftover treats. When it‚Äôs scorching hot, she gives them watermelon or frozen treats to cool them down and encourage drinking water.¬† 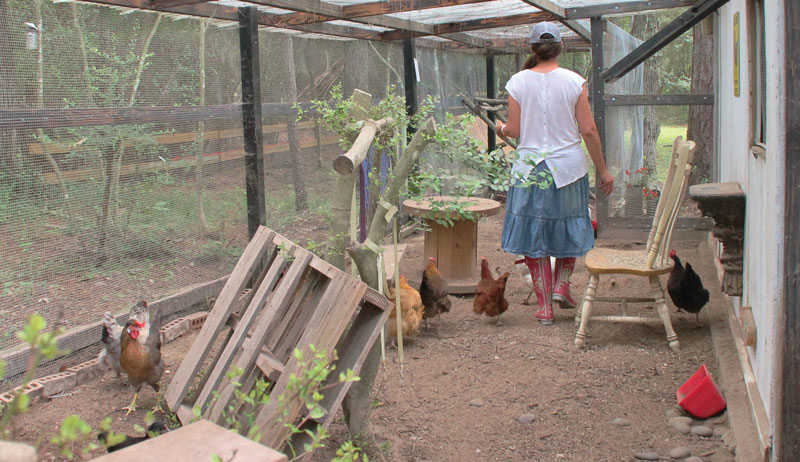 The smaller 400-square-feet chicken run includes a chicken swing and other playground equipment. When Chrissy calls a chicken‚Äôs name, that chicken runs to her. She has approximately 14 chicken breeds and not quite 20 cluckers.¬†

Days begin about 7 a.m. with chicken chores. Chrissy spends two to three hours daily with the chickens, but it really takes about 45 minutes to care for them. Nearby compost bins contain black soldier fly larvae that digest organic compound before the waste starts decomposing and leaves no odor and limits chances of disease in the bins.¬† 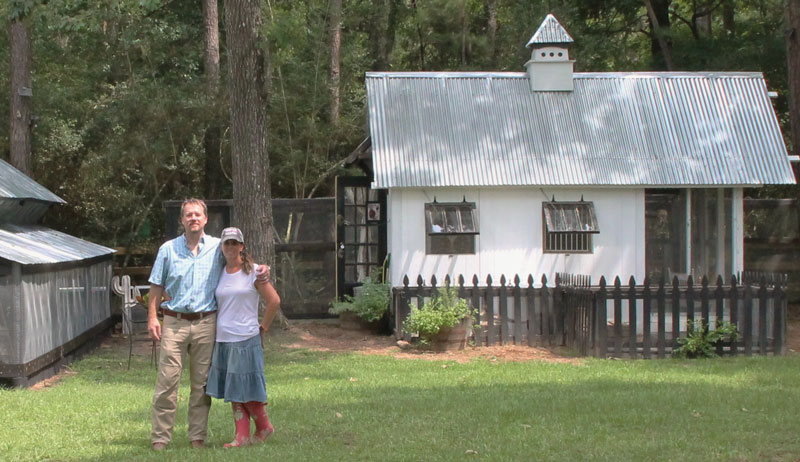 At just under 500 square feet, the four main support frames fit together with mortise and tenon slip joints, then held firm with lag bolts. Chris built the first frame, then laid out the second on top of the first, third on top of the second, etc., stacking them so they were all as identical as possible.¬†

‚ÄúI took them all apart and moved them from the garage to the run location,‚ÄĚ he says, ‚Äúand reconstructed them and installed the lag bolts to hold the frame joints together. We erected the four main frames and leveled them, set in concrete.

“We used cardboard tube collars around the posts to give an extra 6 inches of concrete protection to the post beams from the chickens kicking up dirt and mud‚ÄĒhopefully to prevent wood rot.‚ÄĚ

Once leveled and set, standard 2-by-4s connected the frames together, to complete the walls and roof sections. They screwed on the roofing and roof flashing cover, then covered the walls and gaps with mesh wire. It took lots of staples from the pneumatic stapler gun and some patience, fighting with the mesh wire to get it as flat as possible. 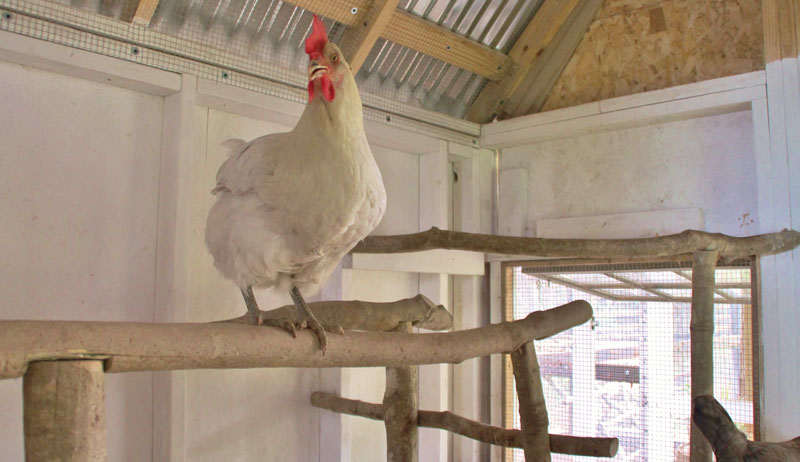 ‚ÄúGiving them something to do keeps them happy, entertained and healthy! It was fun building all their swings and ladders! I laugh watching them climb across their balance beam and swinging with each other.‚ÄĚ¬† 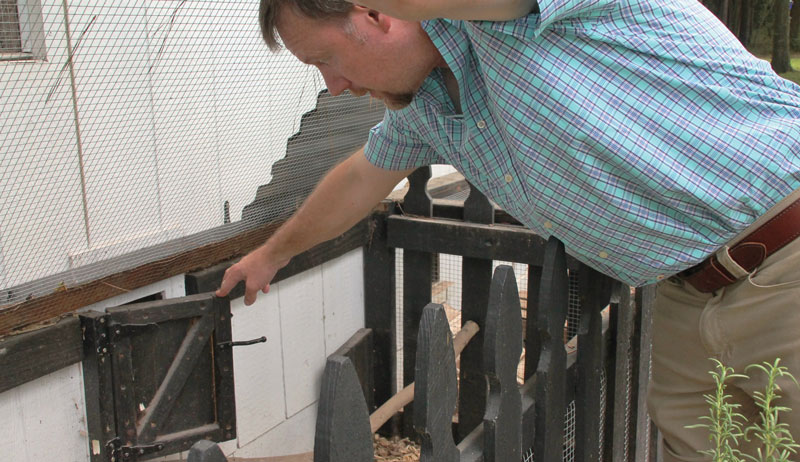 This door allows chicks out of the brooder box into the grow out pen. Chris created chicken-sized doors everywhere, but whether doors for chickens or people, every door has a latch and lock. 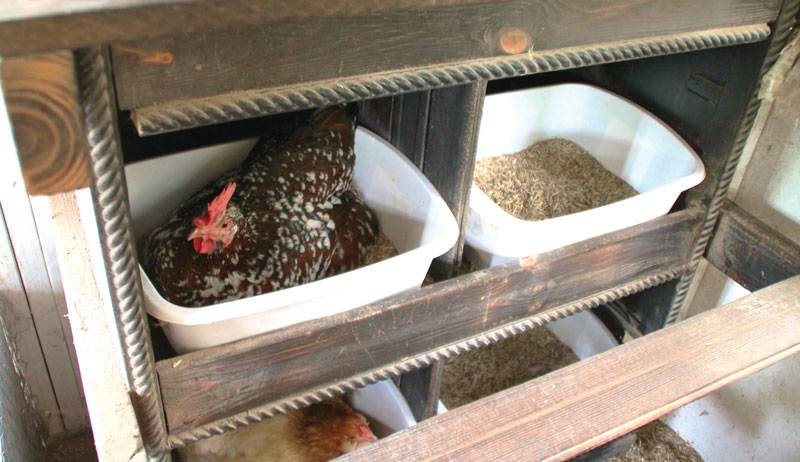 Hens use plastic tubs for nesting boxes that sit in a vintage armoire. Electric fans are mounted all over the place. Running electricity to the area proved cost prohibitive.

Instead, four 100-feet-long 10/3 extension cords string from the house to the chicken coop.¬†

‚ÄúIt is 325 feet from our house to the coop, and far enough away to keep flies and smells at bay, and to give me a reason to walk more each day,‚ÄĚ Chris says.¬†

‚ÄúIt‚Äôs in a shaded area among the trees and a high point in our yard which keeps the runs and coop dry when Texas experiences torrential rains.‚ÄĚ

‚ÄúSome predators will stop at nothing to eat chickens,‚ÄĚ Chris says. ‚ÄúWire, run along the ground, keeps predators from digging under and into your run or coop. It is regular welded wire with a plastic coating to keep the wire from rusting and failing.

“It is 4 feet wide and goes under the cinder blocks at the bottom of our run. It‚Äôs held in place with landscape pins. The grass grows up to hold the wire down for good.‚ÄĚ 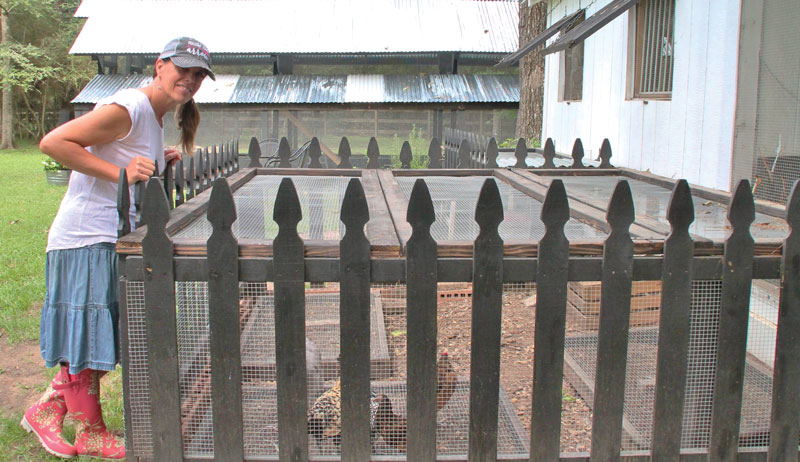 In the chicken garden, Chrissy plants seeds in mesh-
cov
ered grazing boxes. The chickens eat the greens, but they can‚Äôt pull up the plants through the mesh.¬†

On the right are several coop windows. Because bobcats will rip open screens, Chris installed bars over all of them. All the windows are open during the summer. Besides fans, there‚Äôs also an air conditioner. When it‚Äôs steaming hot, the Doolens turn it on, cool things down and turn it off.¬†

During winter, the windows are closed. The chickens stand in front of heat plates to warm up.¬†

The chicken coop is well ventilated, and everything is well caulked.

‚ÄúChickens like temperatures from 65 to 75 degrees Fahren¬≠heit. But they wear feather coats. They puff up, huddling together to stay warm. I worry about them being too hot, rather than too cold,‚ÄĚ says Chrissy, whose great-grandmother was a farmer from Opelousas, Louisiana.

A Buff Orpington, Harriet, enjoys the rocker inside the larger chicken run, which also has a ladder and wagon wheel. All furnishings were roadside pick-ups, from resale shops, scraps or from social media.

Chrissy chose chicken names, drawing from her long-ago-country ancestors, and other sources. ‚ÄúTheir names give you a certain feel of the past, of days gone by,‚ÄĚ she says.¬†

A historian, author and photographer, Carol Mowdy Bond earned her bachelor‚Äôs degree in history from Oklahoma State University. As native Oklahomans and members of Choctaw Nation of Oklahoma and Choctaw Nation Artist Registry, Carol and her sister comprise an art, photography and writing team‚ÄĒChahta I Tek Tuklo‚ÄĒonline at www.twochoctawsisters.com.