Chestnut, Ash, Hemlock: Can These Forest Icons Be Saved?

You can help scientists studying the decimation of these trees by identifying ones that have withstood insects and diseases. 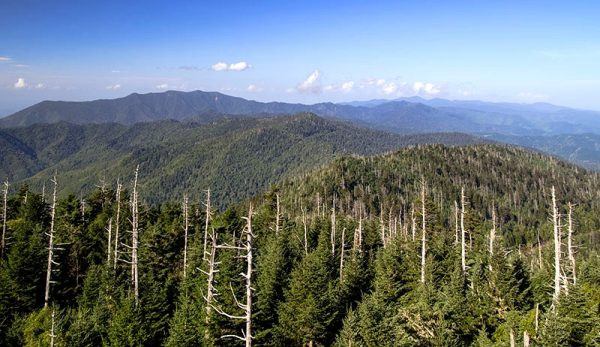 Iconic trees of North American forests have had a devastating century, riddled with invasive insects and diseases that have killed countless individual trees and drastically altered woodland ecosystems. Yet a diverse team of scientists including Dana Nelson of the Forest Health Research and Education Center¬Ýare finding ways to optimize the few remaining trees of chestnut, ash and hemlock. The team’s main question is determining whether a genetic reason exists that some trees live and some die.¬ÝIf you are a woodland owner, a hiker, a forager, or you simply know the trees in your neighborhood, you could help answer Nelson’s question and renew hope in a return of the lost trees.

In 1904, in the Bronx Zoo in New York City, a fungus that girdles the trunk of chestnut trees was introduced to this continent from Asia. Chinese chestnut trees had evolved along with the fungus and naturally developed a resistance to it. Here, however, within 50 years, the airborne pathogen had spread to the entire native range of American chestnuts. While seedlings might survive 10 to 15 years, they don‚Äôt live long enough to reproduce, making them functionally extinct.

At a recent forestry lecture in Lexington, Kentucky, called Forests of the Future, Ben Jarrett spoke about experiments in breeding trees by the American Chestnut Foundation. By crossing American and Chinese species, the result is a tree that holds 15/16 American genes and 1/16 Chinese. Nelson describes this as a ‚Äúmoderately blight resistant chestnut tree.‚Äù

Combining the breeding program with biotechnology, the researchers also target the function of the blight by inserting a gene from wheat that breaks down oxalic acid, the main enzyme the chestnut blight attacks. With that result, they have a single tree from which clones are reproduced.

A few chestnut trees remain healthy in the wild, and researchers need help finding them.

Just in this century, the invasive emerald ash borer, commonly referred to as the EAB, has killed millions of ash trees in 30 states and three Canadian provinces. The adult beetle bores a small hole in the bark, after which the larvae interrupt the flow of nutrients as they tunnel through the phloem, essentially strangling the tree. Within just four to seven years of a tree‚Äôs first symptom, the ash is 99 to 100 percent guaranteed to die. The survivors, the 1 percent, are the focus of Jennifer Koch and her colleagues at the United States Forest Service Northern Research Station.

The USFS is exploring what helps lingering trees outlive their neighbors. In the lab, host trees seem to fight back, killing 5 to 50 percent of the larvae. In some cases, the surviving larvae weigh less than other larvae, and they show a preference for feeding on nonlingering trees.

In native forests, the USFS tracked the relationship between EAB and ash populations, and it appears that the insects die when the trees die. However, just because the trees are gone doesn‚Äôt mean the threat has disappeared. Emerging ash seedlings continue feeding the EAB population. Finding a way to help a whole range of ash trees (green, white, black, blue and pumpkin ash) become resistant depends on finding more lingering trees.

The hemlock woolly adelgid, an insect native to Japan commonly called the HWA, has decimated¬ÝEastern and Carolina hemlocks, a foundational species for native forests, as well as a beloved ornamental and farmed Christmas tree. Researchers debate whether the tiny insect, just 1mm in length,¬Ýwas introduced in North America in the 1920s on the West Coast or the 1950s on the East Coast. It attaches to the base of the tree‚Äôs needles and sucks sap. The tree will wall off the invader and lose its needles. Even though the hemlock might defend itself, the HWA persists. The abundant ‚Äúwool‚Äù of the woolly adelgid are its egg sacs, which you can see in the photo below, and it doesn‚Äôt even need a mate to reproduce exponentially.

Ben Smith with the Forest Restoration Alliance explains the efforts to save the hemlock are also based on finding naturally resistant individual trees, which he calls ‚Äúa rare occurrence at best.‚Äù Smith‚Äôs lab collects cuttings from lingering hemlocks, cloning them and monitoring their resistance to HWA by intentionally infesting them in a controlled environment. Hundreds of the tiny adelgids cover a square inch of hemlock bough.

Like the chestnut and its blight, Asian hemlocks are resistant to or tolerant of the HWA. Crossbreeding specimens of native hemlock with trees from China, Northern Japan and Southern Japan have proved difficult. While these exotic species can survive the HWA, they don‚Äôt cross well with local trees, which is why finding, protecting and reproducing the local trees is the more probable hope for a hemlock future.

For more about the hemlock woolly adlegid and the impact of invasive species, see the documentary below.

How You Can Help

TreeSnap.org is a new platform for connecting trees with scientists. Average citizens contributing data via its phone app means more eyes on the land and improved odds of finding trees that have survived. Researchers believe these lingering trees hold genetic strengths that the surrounding trees lacked. Their survival might range from tolerant to resistant, and they show promising signs that crossing them with other survivors could at least increase the nursery stock of viable trees, and (it’s hoped) someday reforest rural and urban landscapes with the iconic trees of the past.

This citizen science tool is a little different than others, which sometimes fail to meet scientists‚Äô standards. TreeSnap was developed by the researchers themselves, based on the questions their labs are asking, and they expect the app to be an integral part of their research. In addition to the chestnut, ash and hemlock, other threatened trees they want to find include red bay, Florida torreya, American elm and white oak.

To contribute information, visit TreeSnap or download the app from your mobile device’s app store.