Dual-purpose Cheviots produce delicious meat and white wool. They're also known as Border Cheviots because they were originally raised on the border between Scotland and Northumberland in England. 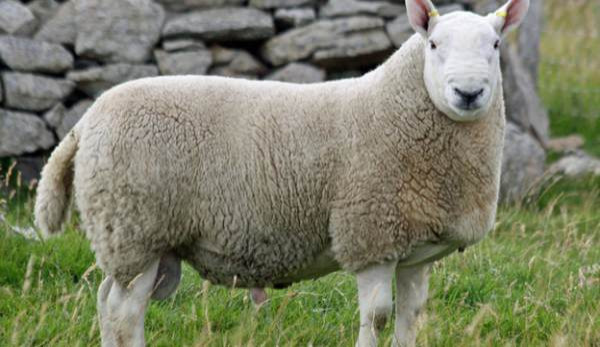 History: Cheviot sheep (also known as Border Cheviots) originated in the windswept Cheviot Hills straddling the border between Scotland and Northumberland in England. As early as 1372, the wee, dun-faced ancestors of today’s Cheviots roamed these bleak, open hills. Originally called â€˜Long sheepâ€™ (a name used since at least 1470) or â€˜White sheepâ€™ (in contrast to the Scottish Blackface), Cheviots were a mountain breed of extreme hardiness that reliably produced meat and wool in the cold, wet, hill country. By 1791, Sir John Sinclair, then President of the British Board of Agriculture, said, “The highlands of Scotland, if covered with the coarse wool breeds of sheep, their wool might be worth 300,000 pounds of sterling, whereas, if the same ground were covered by the Cheviot, the true mountain breed, it would be worth at least 900,000 pounds sterling of fine wool”; he liked them so well, in fact, that he sent a flock of 500 Cheviots to Caithness and Sutherland in northern Scotland, where, crossed with Border and Longwool Leicesters, they evolved into today’s North Country Cheviot sheep (www.northcountrycheviot.com). Irish Wicklow Cheviots (www.wicklowsheep.ie) came about when native Wicklow Mountain sheep were crossed with Cheviots from Scotland; in Wales, Brecknock Hill Cheviots evolved in the same manner. Cheviots came to America as early as the 1840’s. In 1924, fanciers formed the American Cheviot Sheep Society and subsequently developed a longer-legged, meatier Cheviot for today’s market. However, the old-style Cheviot still persists in Great Britain and in the American Miniature Cheviot sheep.

Conformation: Modern American Cheviots are medium-size sheep. Ewes weigh between 130 and 170 pounds; rams go 160 to 200 pounds. They are white-faced, polled (hornless) sheep with wool-free faces and legs; somewhat Roman-nosed (convex) profiles; pricked, horse-like ears; and black noses and feet. Their small heads make lambing a breeze; ewes are prolific and milky. Like most other British hill breeds, they are easy keepers and very long-lived.

Special Considerations/Notes: Hardy and productive Cheviots are active, agile, intelligent sheep and they don’t display strong flocking instincts. In addition to being outstanding producers of prime lamb, Cheviots are ideal for advanced herding dog training purposes and they work unusually well in hobby farm situations where a friendly, rugged, dual-purpose wool and meat breed is desired.