When feral chickens made a home in Cindi Fontanilla's yard in Kalaheo, Hawaii, the birds and their babies brought joy and a sense of purpose with them. 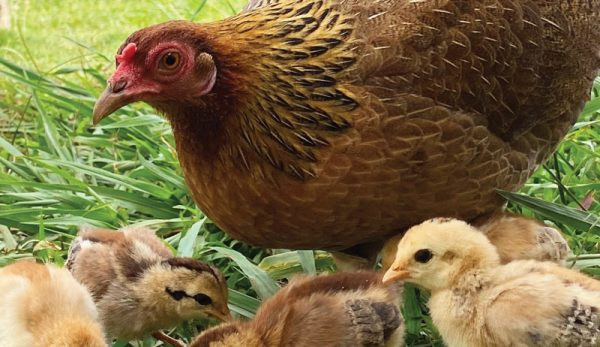 It takes one chicken to come into your life and change the way that youâ€™ll forever look at chickens. That one bird for me was Chickadee, a feral little brown hen with eight little chicks in tow. The little chicken started visiting my yard in Kalaheo, Hawaii, in May 2020 during the pandemic. She came into my life during a time of uncertainty. I was recently laid off from my job of 13 years with the tourism industry and didnâ€™t know what the future held for me.Â

I remember that day clearly. Sitting at the kitchen table, I heard little cheeps coming from outside. I went out onto my porch and saw a little brown hen with eight little balls of fluff trailing behind her. I fed them some food, and to my surprise, they ran toward me and the food instead of away from it like some of the neighborhood chickens do.Â

Watching the mama hen with her baby chicks instantly took my mind off of my troubles and put a smile on my face. I remember just soaking up the moment, because I thought that would be the first and last time that Iâ€™d ever see them.Â

To my surprise, the mama hen and her clutch of chicks stopped by again the next day, the following day and each day after that. They continued visiting my yard daily, until one day, she decided to move right into my backyard.Â

By this point, I had named the little brown hen Chickadee. Sheâ€™d spend all day free-ranging in my backyard and roost in the trees at night. Shortly after she moved in, other feral chickens from the neighborhood joined her.

Read more: The feral chickens of Ybor City are pretty much public pets.

Chickadee was the first chicken to capture my heart, but she was definitely not the last. Many other amazing chickens followed.Â

Liv was a feral rooster that lived at the park near my home. I visited him daily for months and formed a special bond with him. He is by far the friendliest rooster Iâ€™ve ever encountered. Every time heâ€™d see my car coming through the park entrance, heâ€™d start running toward me and was always the first to greet me.Â

During my visits to the park, Liv would stay by my side. Heâ€™d follow me around or perch on my shoulder. Heâ€™d fly up onto my lap so that Iâ€™d hold him and pet him. He was so affectionate. I spent so much time at the park that I was able to watch Liv transition from a cute little cockerel into a handsome rooster.Â

In May 2021, I found a lone black chick wandering around my backyard in the late afternoon. I waited for a while to see if any hens would show up, but none ever did. Finally, I ended up catching the little chick and brought her indoors for the night.

I cuddled with her and kept her warm with my body heat. I got attached very quickly and decided to name her Kiko.Â

My initial goal was to reunite Kiko with her mama hen. Three days later, I saw a black-and-white hen with eight baby chicks around the same size as Kiko. I put Kiko down onto the grass and expected her to run toward them and have a happy little reunion. Instead, Kiko just stayed next to me, not showing any interest in the mama hen or the baby chicks. This is when I realized that Kiko had chosen me as her mama.Â

Read more: Ramsey the rooster crossed the road for some ice cream and found a loving home, too.

When Kiko was 6 weeks old, my neighbor brought over a lost baby chick that was wandering around in her yard. He was a cute little ball of fluffâ€”light brown with a dark brown stripe running down the center of his back. He had the brightest yellow legs. I ended up naming him Gizmo.Â

I wonâ€™t pretend that Kiko and Gizmo got along right away. Kiko would chase Gizmo around, and it seemed like she wanted this newcomer to know that this was her home and I was her mom. Over the first few weeks, Gizmo slowly started to win Kiko over. Eventually, Kiko let him in, and she started to see him as her companion.Â

Caring for Kiko and Gizmo was a whole new experience for me. I was used to caring for the feral chickens, by providing them with food and water, but it was nothing like caring for baby chicks of my own.Â

My boyfriend got involved in helping me raise Kiko and Gizmo, and he instantly fell in love with them, too. Our shared love for them strengthened our relationship and brought us closer together. They have been a blessing in our lives and in our relationship. And to think it all started because a little brown hen wandered into my yard one afternoon!Â

Cindi Fontanilla lives in Kalaheo, Hawaii. Follow her on Instagram @aloha.chickadee. This article originally appeared in the July/August 2022 issue of Chickens magazine.