Why did the the rooster cross the road? For Ramsey, for an ice cream cone that led to a new home with a loving chicken lady. 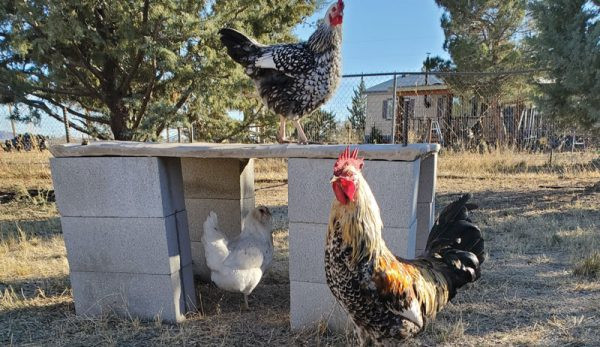 This all-true, real-life, most-epic rooster story began on a sunny Saturday afternoon. A happy chicken lady took advantage of the nice day and went on a beautiful hike. Now this hike ends on a fairly busy thoroughfare called Ramsey Road.Â

Chicken lady was pretty tired as she started the last stretch on the road. So she almost couldnâ€™t believe her eyes at the sight! What was right before this chicken ladyâ€™s eyes on Ramsey Road but a most handsome rooster!Â

He was very colorful: oranges, tan, black and cream. He had pearly, almost-iridescent tail feathers. He looked quite robust and seemed to also be enjoying the beautiful day just strutting down the street.Â

Well, this chicken lady had concern for the handsome rooster. You see, there are quickly moving cars on Ramsey Road, as well as coyotes, mountain lions and other local predators. So, she did what any chicken lady would do. She approached the rooster to see how she could be of help.Â

He was pretty friendly and didnâ€™t seem to mind. He didnâ€™t even run away, and he didnâ€™t try to fight. But he was also still very much enjoying the day so he resisted her first attempt at a catch. Now chicken lady didnâ€™t want to pressure the rambling rooster, so she left it at that and went on her way.Â

As usual, she also had an ice-cream stop on her mind. So, about 15 minutes later, chicken lady was waiting in the drive-thru for her ice-cream cone. During this time, it just wasnâ€™t possible to get that handsome rooster out of her head. She really had quite a concern for him. What to do? Oh, yes! Thatâ€™s it! She knew just what to do. Which was the very same thing any other chicken lover would do.Â

Would you like a hint at what the chicken lady did next? Chickens sure love their treats, donâ€™t they? Yes, they do! So, chicken lady drove back up Ramsey Road with her ice-cream cone in hopes that the handsome rooster was still there.

To her surprise, he was still right where she had bid him farewell!Â

She safely pulled over and got out of the truck to say hello again. She tossed a piece of the cone to show him that she came back with tasty treats. He was very happy about this, so chicken lady then held out the cone to see if he would like a bite.

He did! Handsome rooster came right up and took one big bite. He couldnâ€™t believe this nice chicken lady brought him an ice-cream cone! Little did he know what would happen next!Â

The chicken lady knew she would have to make her move. So on his second bite she carefully but quickly grabbed him up. Naturally, the robust rooster wasnâ€™t so happy about this, but he did want to finish his delicious ice-cream cone, so he obliged.Â

Chicken lady moved swiftly to make her new friend as comfortable as she could. She carefully wrapped him in a towel knowing this would help him to relax. She buckled both of them into the truck and off they went.Â

But wait? What happens if someone nearby was missing their handsome rooster? Chicken lady wanted to make sure this wasnâ€™t so. She decided she better drive to the nearby homes and check.

Everyone she met agreed he was quite a handsome rooster, but they had never seen him before. So she took him home with a big smile on her face.Â

You see: Chicken lady had four sweet, lovely hens at home. Surely, this bachelor rooster would be happy and content staying with these chicks. After a few days of the typical transition and introductions, she let the handsome rooster out on a pleasant sunny morning with the four lovely hens.

After a few scuffles and a few struts, the handsome rooster (whom we now call Ramsey) and the four lovely hens became a family.Â

So why did the rooster cross the road? To go home with the happy chicken lady and be the best rooster ever to her lovely hens Patty, Nugget, Pearly and Fluffy Cheeks, of course.Â

Melissa Jones lives in Hereford, Arizona, with her five chickens.Â