Chicken Chat: Chirping Chicks Made Me a Crazy Chicken Lady

A visit to a farm-supply store during chick season seven years ago started a backyard flock and a passion for keeping chickens. 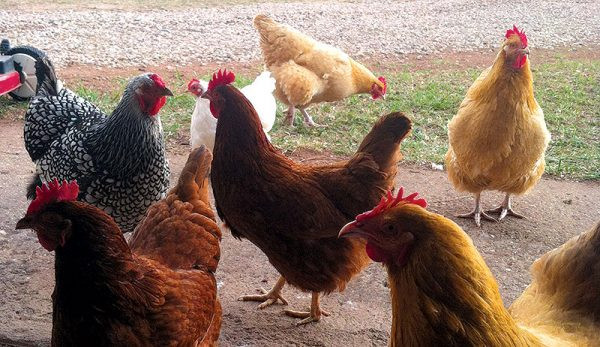 When my husband and I walked into our local farm-supply store seven years ago for some lawnmower parts, I heard soft little chirps coming from just a couple of aisles away. I had to go and investigate.

I walked out of the store that day with seven baby chicks in a cardboard box, a chicken book, a bag of shavings, a heat lamp, chick-starter feed and a very concerned husband. We knew nothing about raising chickens.

When we got home, we borrowed a stock tank and got the chicks settled into our house. The following day, we started working on plans to build our new tenants a home of their own. We ended up with a very secure coop and yard.

â€śFort Knox called and asked if they could store their gold in our coop,â€ť my husband joked.

Home is Where the Chickens Are

We held the chicks a lot; we wanted nice, friendly, happy chickens. When they were old enough, we moved them outside to their new home. Those feathery little ladies stole my heart. I just couldnâ€™t believe how chickens could bond like that to a human. They are just farm animals, after all, right?

We now had a beautiful flock. One of the small hens was a pure-white bantam Cochin with feathery legs and a lot of personality. We named her Princess Layer.

As time went by, we were constantly peaking into the nest box. Then, one day, there it was: a beautiful brown egg. We were so excited that you would have thought it was a golden egg. Three of us split it so we could all try a bite of this wonderful gift that we had been waiting so patiently for. It was the best-tasting egg we had ever eaten.

Our home at that time had a very small backyard, and we eventually moved to a place with more property. The people who were purchasing our house wanted the chickens and the coop to be part of the deal, but I wasnâ€™t about to leave my little ladies or their home behind. I wasnâ€™t sure how we would get it out, but I knew I just had to. My dad and brother showed up with a flatbed trailer and a skid-steer tractor. We took everything out of the coop except for the chickens â€” they got on the floor and remained silent as the tractor lifted their home â€” loaded it and them on the trailer, and took a ride to our new home. We got several strange looks from people on the way across town.

Finally, we arrived. My brother took the skid-steer and slowly lowered the coop and chickens off the trailer. After a few attempts of getting the perfect spot, it was time to open the door. Each chicken poked its head out, looked around and then jumped out, ran around, flapped its wings and started grazing. They were seven very happy chickens!

My chickens follow me everywhere I go. One in particular is named Chicken Little. She is a Buff Orpington. If I am digging in the garden, she is digging. No matter where I go, she is by my side. She even looks in the window at me while I am on the computer. She is my wonderfully cute little chicken friend; she knows all of my secrets and keeps them to herself.

With so much space at our new place, I had to train my ladies to come when called. I go outside and yell â€śCome on, little ladiesâ€ť in a high voice, and they come running. There is nothing funnier than those running chickens!

As time has passed, we have begun to lose some of our initial feathery friends. Most of them have passed away because of old age. When Princess Layer left us, we buried her, and for three days after, when I would put the other chickens out, Chicken Little would go right up and lay down on top of her grave. She missed her best buddy.

We just got another eight chicks so that our older ladies can train them. It looks like we are starting a new adventure. For people who have never owned chickens, they donâ€™t understand what a pleasure and joy these birds are. I am sure to most of the outside world I just look like another crazy chicken lady. I suppose they are right. I am crazy about my chickens, and it has been a pure pleasure being their caregiver. They give us eggs. We give them love. You canâ€™t beat a deal like that.

Jamie Raper lives in Fort Collins, Colorado, with her husband, Keith. Together, they have raised four wonderful children are now raising 10 chickens, and theyâ€™re in the process of opening a farm stand from all of the wonderful items they have grown on their hobby farm, dubbed â€śOur Little Slice of Heaven Farm.â€ť Their stand includes fruits, vegetables, freshly baked pies, cookies, bread, nuts, jams, spices and, of course, fresh eggs.