One Chickens magazine reader's journey into keeping a backyard flock started out of a concern for her health. 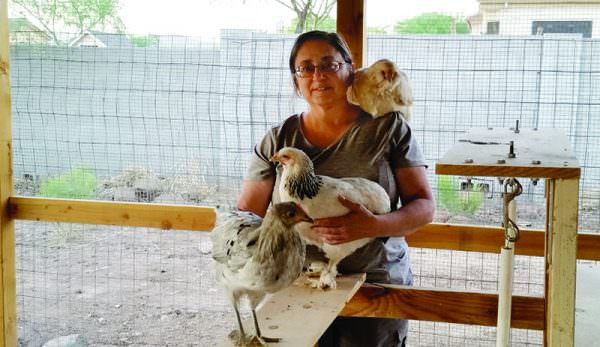 Everyone has their own personal reasons for getting into chicken keeping: to be self-sustaining, to sell eggs or chicks, to breed heritage lines, for companionship ā¦ the list goes on. My entrance into chicken keeping was an evolution from a medical issue.

In 2010, I was diagnosed with Type 2 diabetes. I was having a terrible time with the side effects of medication so my doctor worked with me to control my glucose with diet. After several years of following this treatment, I ended up on a mostly plant-based diet where my main source of protein is eggs. Between making baked goods and breads from scratch and eating eggs themselves, I was going through two to three dozen eggs each week, so I decided that if I was going to eat that many eggs, they needed to be the best eggs I could find!

I began reading my doctorās recommended books and doing some plant-based diet research, learning about organic versus non-GMO and the distinctions between vegetarian, vegan and Paleo diets. After seeing the eggs available at my various local grocery stores, I came to the conclusion that I needed to raise my own chickens to get the quality eggs I was after. I didnāt want any soy, corn or canola in my diet.

My family has always loved animals, but we didnāt know anyone who raised chickens and we donāt come from a family of farmers, so I began some internet research. I followed several chicken blogs, reading and absorbing everything I could.

My results led me to a local permaculture group that offered a 2-hour class about raising backyard chickens. I figured the investment in the class would help me determine if this was something I should actually pursue, and it did.

My next step was to find a coop kit online and a local farm-supply store for feed and other necessary items. Due to living in the Arizona desert out in a county island where coyotes, javelinas, bobcats and other wild animals roam, we decided we needed a fully enclosed area to keep the chickens safe. With our busy work schedules, we didnāt have time to build a coop and run so we hired someone to do it for us. After he built a brooder cage so we could raise our flock from chicks, he began work on an 8-by-9-foot coop, which would be large enough for four hens that would provide the number of eggs we needed.

Then the chicken math began: A year later, we were expanding our coop to 8-by-19 feet to accommodate eight hens by adding on to the existing run and replacing the freestanding coop with a built-in coop. The door to the run now opened into our dogās fenced-in area. This way, we had the flexibility to let the hens into the fenced in part of the yard, when needed.

Another year passed and we were expanding onto the existing structure once again. The coop is now a 12-by-16-foot building with an attached 18-by-16-foot enclosed run. Inside the walk-in coop, I have a storage area, a grow-out pen and several nest boxes and roost bars. This expansion can comfortably accommodate up to 30 chickens.

To keep our ever-growing flock from getting bored, weāve built several perches, ladders and a swing, and also mounted a mirror. I included a bench for myself so I can spend time hanging out with my birds. We also fill treat balls every once in a while, as well as a hang up an egg-basket with fresh veggies and herbs for them to peck.

For water, we use an automatic system hooked up to a house. Itās so hot and dry in Arizona that I want to be sure the girls never run out of fresh water.

In the summer, I make ice blocks for the girls; sometimes I put fruit in the ice for a special treat as the ice melts. I use large ceramic dishes, the kind that go under ceramic planters, to hold the ice blocks because ceramic holds the cold longer. But putting the dish on the ground allowed the girls to kick all sorts of bedding, dirt, etc. into it, so I got some large clay pots where the opening on the top was just the right size to hold the ceramic dishes.

Once a week, I give the coop and run a good cleaning. Everything is freshened up with nesting box herbs, and all the poop gets dumped into the compost tumbler. Lily, my Light Brahma, follows me around as I clean, inspecting everything to make sure I do a good job!

Because I raised all but four of my 13 girls from chicks, they are very friendly. They donāt all like to be held and carried around, but they will allow you to pick them up. This is important to us so each can be physically inspected if we think something might be wrong.

We find our chickens to be very relaxing. Itās very enjoyable to come home from work, collect eggs and hang out for a while as a great way to unwind from the busy workday!

This article appeared in the January/February 2017 issue ofĀ Chickens.

Amy Clair is a Chickens magazine reader who keeps chickens in the desert of Arizona.