An accidental chicken lady adopts a scrawny hen named "Poor Thing" who eventually blossoms and thrives in her new home. 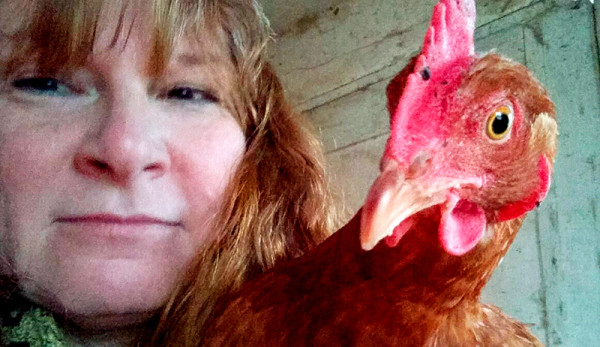 I never intended to become a chicken lady. I just happened to move to a property that came with a lovely little shed that made a nice coop, and when a neighbor was looking for someone to take her old laying hens, I became that someone.

Past their prime, the old red hens werenâ€™t interested in laying eggs any more, but they looked nice free-ranging about the yard, scratching and making contented chicken sounds. I put nest boxes up in the little shed, now an official coop, and much to my surprise, they began to lay again. It wasnâ€™t a lot, mind you, but it was enough to keep my household in scrambled eggs and Sunday-morning omelets.

One autumn, my friend Leslie came to me with a chicken that she was looking to rehome.

â€śI donâ€™t know what to do with this poor thing,â€ť she said. â€śThe other chickens pick on her to no end.â€ť

The poor thingâ€”or P.T. as Leslie had dubbed herâ€”arrived with about 10 other ready-to-retire hens, who instantly dashed out of their carriers into my yard and began scratching around. When the last one stepped out, I knew immediately it had to be P.T. She was smaller than the others and had been pecked clean of feathers on her scrawny neck and had no tail feathersâ€”just a stubby point.

As fall morphed into winter, P.T. began to grow stubbly little feathers. A heat lamp in the coop kept her warm and comfy, but I worried that she would not make it through the cold months ahead in her near-naked skin. However, she became a little bolder, a little downier and not quite as poor, and as spring arrived, her red and white tail feathers began to emerge ever so slightly.

By June, P.T. had settled into a new lifeâ€”one in which she began to resemble a real chicken. She still had a runty look about her, and her feathers had not fully come in, but she looked better. More than that, her personality was changing; she was becoming a scrapper.

Depending on what season it was, the hens would get leftovers from the kitchen includingÂ watermelon rinds and squash skins. And because my birds free-ranged, if we were out on the patio having snacks, they would come running. P.T., in fact, started leading the charge.

A year turned into two, and P.T. had transformed. Her feathers, even the ones on her tail, had almost fully grown back. While she would never be as beautiful as a fair-winning hen, we agreed that P.T. now must stand for â€śPretty Thing.â€ť She was a happy hen, compared to what she had been when she first arrived, and despite her advanced age of about 7 years, she continued to lay an egg every once in awhile.

P.T. had some rough times, though. Some-where along the line, she developed arthritis. On rainy days, she would limp around. But hold a treat out and that limp would disappear, and she could run across the yard at an Olympic sprinterâ€™s clip.

Last winter, we moved to a beautiful country valley farm and transferred P.T. and two of her original sisters to our beautiful new coop. P.T. immediately decided to identify with the three barn cats and would hang out with them at the back door. After all, they got fed twice a day and P.T. had now developed a taste for cat food. She started to buddy up with a neutered male cat named Horus. She and Horus would sit on the rock wall together and groom. They would sit in the yard together, sleep in the sun and sit at the back door waiting for dinner.

P.T. took great advantage of her limp disability at this time, as well. Every night, she would wait for me to lift her back into the coop and then into her nest box, where she preferred to sleep, as opposed to on the roost with the other hens.

One day last fall, it began to rain, and P.T. didnâ€™t want to get out of her nest box. The rain went on for a couple of more days, and P.T. continued to stay in her box. When the rain stopped, we brought her out and set her in the grass and sunshine. She drank water, ate some food and looked around. I could sense her time was coming to an end.

On a warm, sunny September day, I looked out the kitchen window and saw P.T. give some semblance of a death throe. I hurried outside and sat down beside her. Horus suddenly appeared along the other side and laid his head down on his paws. We sat there with her as she died peacefully. Tears welled up as I realized I was losing a friend who had been through so much and had overcome an early life of bullying to become a pretty chicken with so much personality.

It was bittersweet to shut the other chickens in for the night without having to lift P.T. into her nest box. One night recently, we went out to do chores and I noticed that a fairy ring of mushrooms had appeared out in the yard where P.T. had passed away. I danced around and said to my husband â€śLook: a fairy ring.â€ť He had never heard of that before, so I explained to him that it meant fairies were dancing out there the night before. It appears P.T. was still working her chicken magic.

Christine Hall and her flock of retired hens live in Kendall, Wisconsin.