Chicken Chat: Losing A Pet Teaches The Value Of Life

Losing a chicken is a difficult experience, but one keeper shares how memories of pet chickens can remind us of how all life is precious. 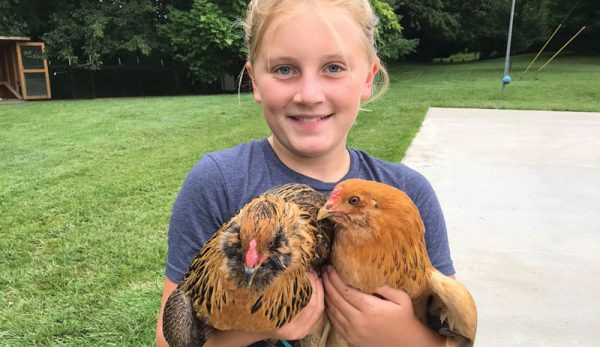 I heard a loud rumbling sound like thunder coming from my neighborâ€™s barn across our backyard. I always tried to act mature and old when he came by to say hello to my dad and talk a little. However, this time he pulled up in our driveway on his ranger,
I sensed that something was wrong.

His steps were quick, coming up the path to our front door. His knock was rapid. My parents came up to the door, and I was right behind them, straining to hear what was wrong.Â

His speech was short. â€śI was patrolling the yard when I saw all these feathers,â€ť he said. â€śI thought that they might be from your chickens. There were so many that I had to come tell you, just in case.â€ť

By now, Mom was very worried. â€śWhere did you find them?â€ť she asked.Â

My heart quickened in my chest as if I was falling towards my death. Then I understood. The realization stung my heart like a thorn. Sleep-Tight, my dear pet chicken, had been stolen in the worst way possible, death, by an animal that haunts the woods.Â

We went out to see the feathers littered carelessly in his yard. I started to cry. There were feathers in his yard, too many to have been from a few stray feathers blown from the coop.

My last encounter with her was that morning when I fed all the chickens. Sleep-Tight was an honorable, reliable and friendly chicken. She had always let us pet her glossy, golden feathers and let us pick her up.

We hurriedly put our other three chickens back in the coop to ensure that they were safe.Â

As I slowly walked to the chicken coop the next morning, again I felt a pang in my chest as I saw threeâ€”not fourâ€”chickens in the coop. I opened the door to let them out and found Vanilla, one of the survivors, lying in the back of the coop, not wanting to come out.

The other two came right outside, unwilling to miss a chance to peck around the yard for bugs and sometimes miniature frogs.Â

Something was wrong. Hurriedly, I ran to the house and hollered inside, â€śMom, Dad, come quick. Something is wrong with Vanilla!â€ťÂ

In a heartbeat, they were at the door questioning me. â€śWhat happened?â€ť Mom asked, eager to find out.Â

â€śI donâ€™t know, but she wonâ€™t come out of the coop. I think that somethingâ€™s wrong,â€ť I said.

I ran to the coop with my parents on my heels. â€śSee?â€ť I called to them as we approached the coop.Â

Vanilla was still in the corner of the coop, and she wouldnâ€™t come out, even after we tried to give her pieces of a hot dog, her absolute favorite treat.

Never before had Vanilla turned down a chance to eat. Vanilla would normally eat until she had stuffed herself to the rim.Â

As we watched her for the next hour and a half, willing her to take a sip of water or eat a bite of food, she wouldnâ€™t do it. It was time for me to take charge.

I filled up a decently large bucket of water and took a spoon to use to dump water in her mouth. Spoonful by spoonful, I trickled the water down her curved beak, while sitting in the grass. Vanilla didnâ€™t even seem to register what was happening. She seemed to be staring off in the distance, oblivious to the fact that I was sitting there, begging her to drink.Â

I tried so hard to get Vanilla to eat or drink that I forgot about my lunch, which had been sitting on the kitchen table for more than an hour. It was probably cold by now. â€śOlivia, come in right now and eat your lunch before it freezes!â€ť my mother yelled out the sliding glass door.Â

â€śYou need to come in to eat,â€ť she said and walked back inside.Â

I gathered my bucket and placed Vanilla inside the coop. I walked as if my feet were concrete back to the house. I ate a few bites, unwilling to eat with my stomach churning with worry. â€śWeâ€™re leaving in five minutes to go to your sisterâ€™s soccer game!â€ť my mother hollered down the stairs.Â

â€śI know, but weâ€™ll pick up medicine for her on the way back,â€ť my mother said.Â

â€śOK,â€ť I replied with hope rising in my chest at the fact that weâ€™d pick up medicine and then Vanilla might be better again.Â

My feet prickled with anxiety as I watched my sisterâ€™s soccer game. I kept wondering if Vanilla was OK. The chicken had been through a lot with me, and I was honestly not ready to let her go.

Sheâ€™s survived my 5-year-old brother so far, and that is very impressive. He would pester her and the other chickens so much that the chickens had to peck him all over to get him to stop.Â

It seemed like forever until my sisterâ€™s soccer game ended. Finally, we got to the farm-supply store to pick up Vanillaâ€™s medicine. Mom asked the store worker where the chicken medicine was. The store worker showed us where it was.

I chose the big bottle that had a bright red label on the front that read, â€śA Chickenâ€™s Medicine For Curing Sicknessâ€ť from the cabinet. It seemed like the best fit for the state that Vanilla was in.Â

To try to make sure that the medicine was in, we held her for a little bit and pet her, when she spit up all over me. All the water I worked hard to put in came pooling out of her mouth. All the medicine that we just squeezed into her mouth came out.

All my hard work was thrown away. However, I didnâ€™t feel as if I wasted my time. I tried to save my petâ€™s life.Â

Sadly, we put our chicken back in her coop. It was pitch dark by then and the wind blew in my face, making my hair shoot out behind me. The stars twinkled in the sky, as if saying goodbye. We, too, said our goodbyes, in case the next morning she was gone.Â

The night lasted forever. I tossed and turned, occasionally wondering if Vanilla had gone to join Heaven yet.

I thought about how the four chickens used to come up to the patio when we ate dinner and beg for food. Then weâ€™d give them whatever they wanted and laugh and say they were worse than a dog begging for food giving you puppy eyes. I thought about how much weâ€™d been through, feeding and nursing them when they were little.

Those times were coming to an end.Â

Read more: What should you do when a chicken unexpectedly dies?

I woke up the next morning when the sun was just barely out and went to the coop to find Dad leaning over it. I came to join him. There sat Vanilla, limp and lifeless.

I cried. The rest of my family arrived, crying, too.Â

Silently, we buried my chicken Vanilla in the woods, in her happy place. The chickens were silent, as if they also held the weight of Vanillaâ€™s passing on their shoulders. I lead a prayer for her. I choked my words out, heavy with sadness. In Heaven, sheâ€™d meet Sleep-Tight.

I realized that life is precious and painfully hard when you lose someone you care about. I understood that I had to enjoy the precious moments of joy and happiness when that someone is with me.

Olivia Monroe, an 11-year-old 6th grader, wrote this personal narrative (which appeared in the May/June 2022 issue of Chickens magazine) as an assignment for her language arts class about something that has made a big impact on her life. She chose to write about love and loss of her chickens, which she started raising on her own three years ago. We thank her for sharing her story!