Chicken Chat: We Named Our Hens After Ourselves

My family got chickens mostly for the eggs, but we've expanded our flock to include hens named after Disney princesses, too. Yep, I'm the crazy chicken lady. 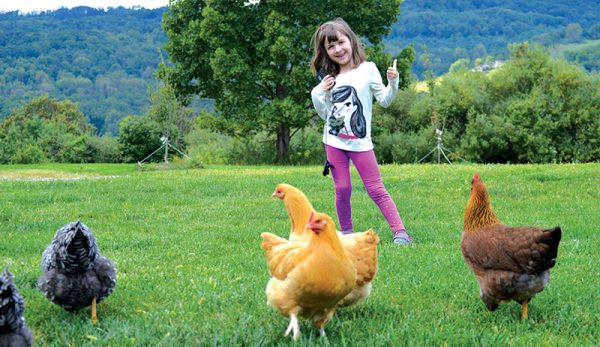 My family had been considering getting chickens for a few years. It seemed like a good idea when it was in the distant future. Other family members and friends had backyard flocks, and I regularly bought eggs from some of them.

After a March visit to a local farm-supply store to buy dog food, we saw and fell in love with the little peeps for sale in the brooder tubs. After that, I threw myself into research. I talked to people who had chickens, varying in size. I researched purchasing at hatcheries versus farm-supply stores, breedsâ€”production, egg color, disposition and cold adaptabilityâ€”and housing. Come April, we had placed an order from an in-state hatchery.

We decided on three Buff Orpingtons, two Barred Plymouth Rocks and three Welsummers. We picked those breeds because they all had docile or friendly dispositions. That was huge because we have young kids, and we want breeds that are not aggressive or flighty. Another important factor was that all these breeds are cold-hardy. Thereâ€™s no way weâ€™d go for a breed that doesnâ€™t deal with cold weather; we live in Western Pennsylvania, after all.

Also, because this endeavor had a purpose of fresh eggs, we wanted breeds that had solid production rates. We werenâ€™t looking for a marathon chicken, but we wanted a breed that produced at least three to five eggs a week. Otherwise, the chickens would just be glorified pets, and that was not our aim.

Our little ladies arrived the day before Good Friday. We allowed our daughter the honor of naming our new peeping friends. Our original order was for eight chickens, and each was named for a female member of our family. My daughter declared this was the only thing that made sense. So we had: Thelma, Kelly, Sara, Shannon, Shay, Leah, Blake and Jameson.

I have to tell you: It became a comical topic of conversation in our family. Everyone would ask how her namesake was doing. The best was when we started to see the chickensâ€™ personality traits similar to those of their human counterparts.

Our first spring and summer were a learning experience. We ended up losing one of our chicks within 48 hours of arriving. One flew the fencing and met a dog. The third, we are still unsure of what happened.

We really enjoyed watching the chicks turn into pullets and then hens. The kids love feeding them and collecting the eggs. My daughter loves to let them free-range. They fascinate me and are a great stress-reliever. My husband â€¦ well, he tolerates them. But Iâ€™ve left for work multiple times seeing him in the chicken run petting several chickens while they flock around him for attention.

In August, we ordered four more girls, two Partridge Rocks and two Silver Laced Wyandottes, again named by my daughter. These girls were all named for Disney princesses: Jasmine, Rapunzel, Merida and Moana.

I can honestly say that I enjoy raising chicks in the later half of the summer. I find it easier to keep their brooder clean, and they get to enjoy the warm weather outside sooner. The younger hens, as well as the older ones, also benefit from the fruits of our summer garden. They even started laying over the winter, which made for a happy surprise.

The addition of the new girls showed us we needed to increase their area, and so the â€śchicken expansion planâ€ť got under way. We expanded our coop from a small store-bought enclosure to a large shed-turned-coop, to what my friends have dubbed the â€śTaj Ma-coop.â€ť We still have some painting to finish, but it made winter easier to maneuver. The chickens have more room, and we slowly introduced two ages of birds to become one flock.

We plan to add more layers this year. Our chickens have become such a huge part of our family; each member enjoys them for different reasons. Our hens provide us hours of entertainment and help teach our kids about responsibility. The chickens help with insect control and disposing of our garden extras. We find that we waste less food, as we try to make sure the girls get all the good extras. And I canâ€™t forgot the obvious: the eggs!

Iâ€™m willing to talk about our chickens every chance I canâ€”how much fun they are, how superior their eggs are and why everyone should have chickens. I have become the crazy chicken lady, but thatâ€™s OK with me. I relish the title.

Chicken Chat is a regular feature in Chickens magazine where readers tell their own stories of how they became chicken-keepers. This story originally appeared in the July/August 2018 issue.

Sara Jacobs is a marketing coordinator and lives in Harmony, Pennsylvania, with her family, boxers and flock. A farm kid, now grown, she blogs about incorporating her roots into daily life at www.hilltop.blog.