When this keeper's chickens broke loose on a winter day, the resulting chase led though the trees, to the middle of a frozen-over pond. 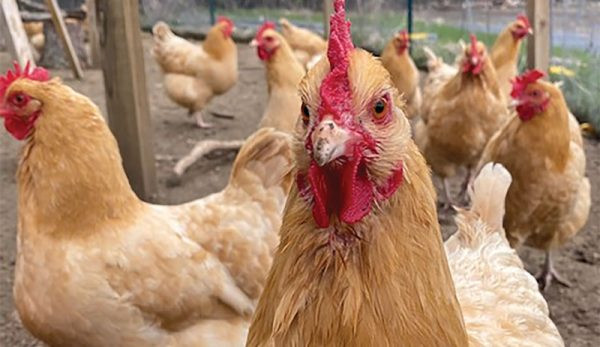 My friend and I were outside letting the chickens free-range in winter. We have 16 chickens, all hens: Zoe, Doodle, Buttercup, Kiwi, Mary, Goldilocks, Hotwings, Pepper, Penny, Chloe, Gracie, Peanut, Thalia, Eggy, Chai and Daisy. We tell them apart by little colored bands and charms on their legs.Â

As they were all grazing on the grass and enjoying life that day, I went into the garage to get some treats. Then I heard my friend scream.

I looked out, and she was pointing at some chickens that were running into the neighborâ€™s yard. They have a little pond, and once the chickens discovered it, a few adventurous ones always make a break for it for a quick drink.Â

There was a little gap between the trees that I could fit through. But a few branches stood in the way.Â

Read more: Get your chickens ready for winter with these easy-to-follow tips!

I made it into my neighborâ€™s yard to find three chickens left: Zoe, Buttercup and Hotwings. They were walking on the frozen-over pond. The ice was strong enough to hold me, so I walked out to one of the chickens. She started running away, so I instinctively ran after her.

A few seconds later, she surrendered. I was able to carry her back to the coop.Â

When I came back, my friend was now standing in the middle of the frozen pond with a chicken in her hands. I was surprised because she was usually afraid to hold them. I told her to carry her back to the coop. As she was passing through the trees, though, the chicken jumped out of her hands.

She kind of just chased it back to the coop from there.Â

The last chicken was a major challenge. I had to chase her a bit before my friend came back. It took a long time of the chicken going between me and my friend. Eventually, I got a hold on her, and she surrendered. Then, I carried her back.Â

From that day on, we give the chickens a tray of water when free-ranging even in winter to keep them from racing to the pond because drinking water from anywhere but their coop can be very exciting! â€”Clay Little (Antioch, Illinois)

This article originally appeared in the November/December 2022 issue of ChickensÂ magazine.