That flashy flesh on your bird's head is more than an ornamental appendage. Chicken combs come in many varieties and serve multiple uses. 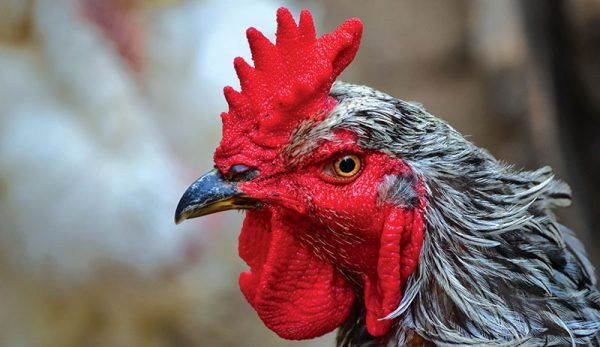 To me, the most intriguing feature of a rooster is his combâ€”that conspicuous fleshy crown on top of his head. Some roosters have combs that stick straight upward. Others wear their combs like skullcaps. Most breeds have bright-red combs, but a scant few have purplish or even black combs.

So what good is such an ornamental appendage to the rooster, or to anyone else, for that matter?

The Purpose of Combs

Most hens have combs, but within each breed, cockerels (young males) develop combs earlier than pullets (young females). This feature helps chicken keepers tell the cockerels from the pullets by the time the birds reach 3 to 8 weeks of age, depending on breed; combs of light breeds develop earlier than those of heavy breeds. At maturity, roosters have larger combs than hens.

The size of a roosterâ€™s comb reflects his state of health and his testosterone level. Hens seeking a vigorous father for their future offspring are attracted to a rooster of good health and virility, as advertised by this de facto billboard on his head.

The comb also proclaims status among roosters in the same flock. The one with the largest comb is typically highest in the pecking order.

The comb is an important feature by which chickens recognize each other. Roosters that have been dubbed (had their combs removed for show purposes or to prevent or treat frostbite) might be harassed by flock mates that no longer recognize the combless bird.

A roosterâ€™s comb also helps him regulate his body temperature. Warm weather causes blood to circulate more rapidly through a comb, helping a chicken release body heat. The larger the comb, the more heat it can release. Chicken breeds that come from hot climates therefore have flamboyant combs compared with the more moderate combs of breeds originating in colder climates.

A showy comb is among the features of breeds characterized as heat-tolerant. On the down side, large combs are more susceptible to frostbite and windburn. Heat-dissipating combs come in the following three styles.

Chicken breeds characterized as being cold hardy generally have combs that lie close to the head. These combs conserve heat and therefore help their owners cope with cold weather. The following six comb styles are typical of cold-hardy breeds.

Check out these breeds by their comb styles.

*breeds with varieties based on differing comb styles

As a reflection of the roosterâ€™s well being, the appearance of a comb is often the first indicator of a health issue. The comb of a healthy rooster is firm and waxy, feels soft and smooth to the touch, and has a robust color. Any dramatic change in the combâ€™s size, shape or color is a bad sign, and it can attract flock mates to peck the unfortunate owner.

Combined with other signs, changes in a roosterâ€™s comb can indicate the nature of his condition. A white, powdery comb might be a sign of ringworm (favus). White or yellow bumps could indicate avian pox. Peck wounds from fighting or sticktight fleas can cause dark bumps or scabs. White tips on a comb indicate early-stage frostbite; in late-stage, the tips turn black.

A pale comb indicates anemiaâ€”perhaps caused by coccidiosis or mitesâ€”fowl typhoid or kidney stones. If the comb is pale and shriveled, the rooster could be suffering from avian tuberculosis or lymphoid leukosis. A dark, bluish or purplish comb that once was red has many causes including ascites, fowl cholera, heart trouble, liver disease, paratyphoid or water deprivation.

A single comb that flops to one side might be perfectly normal, if the comb grew too large to stand erect. On the other hand, a comb that suddenly flops over might have suffered damage or the rooster could be dehydrated.

To test for dehydration, press and release the comb between your fingers, creating a pale spot under your finger. The comb should return to normal color within two seconds. If it doesnâ€™t, the rooster is dehydrated. Any condition that causes diarrhea can result in dehydration, as can a lack of drinking water in winter when water freezes or in summer when drinkers empty quicker than they are refilled.

Rooster combs are a culinary delicacy in many countries. In China, single combs are used in stir-fry dishes and dim sum (a type of dumpling), while in Spain, theyâ€™re added to sauces and soups. American chefs are also catching on to the versatility of combs.

Before combs are cooked, they must be washed, blanched and peeled. The bigger the comb, the easier it is to peel, according to Minnesota chef Alan Bergo.

â€śCleaning combs is tedious,â€ť he says, â€śbut worth it for the end product: a tender, melt-in-your-mouth morsel of chicken-y goodness.â€ť Bergo offers recipes on his website www.foragerchef.com. His video, Cleaning Cockscombs, shows how to prepare combs from scratch.

Culinary consultant Aki Kamozawa of Ideas in Food suggests marinating peeled combs overnight in sesame oil, salt and pepperoncini. The next morning, cover them in olive oil and roast the combs in a low oven until their fat renders, their gelatin caramelizes and they have a bit of crunch. â€śThey would act as a great substitute for bacon in a dish,â€ť shwe says.

In response to testosterone, a roosterâ€™s comb swells with gelatinous hyaluronan, a sugar molecule with multiple medical uses. Hyaluronan is a major component of synovial fluid, the natural lubricant that allows our human joints to flex, skin to stretch, blood vessels to pulse, and ribs to expand and contract when we breathe.

Hyaluronan also has anti-inflammatory properties and is injected into human joints to relieve pain and inflammation. Injected hyaluronan encourages the bodyâ€™s synovial membranes to increase the production of natural hyaluronan. Human conditions treated with this magical substance include osteoarthritis, eczema and post-surgery scarring. Itâ€™s used like Botox to plump up facial wrinkles and is added to some over-the-counter skin care products. Itâ€™s also used for healing wounds and as a tumor marker to detect and monitor prostate and breast cancer.

Rooster combs are not the only source for hyaluronan. It can be derived from streptococcus bacteria, umbilical cords and cow eyeballs. However, besides being a high-quality source, rooster combs are an otherwise wasted byproduct of chicken sold at the butcher counter.

As you can see, roostersâ€™ combs are more than just fanciful headgear. They are diverse in appearance, play an important role in a birdâ€™s health, and are even used in human medicinal and culinary practices. So the next time your gaze falls on a rooster, take a moment to reflect on the amazing multipurpose creation gracing the top of his head.