Coop Builder: Make a Halfway House for Your Hens

Broody hen? New member of the flock? Injured bird? My method of temporarily separating chickens from their peers is an old dog crate. 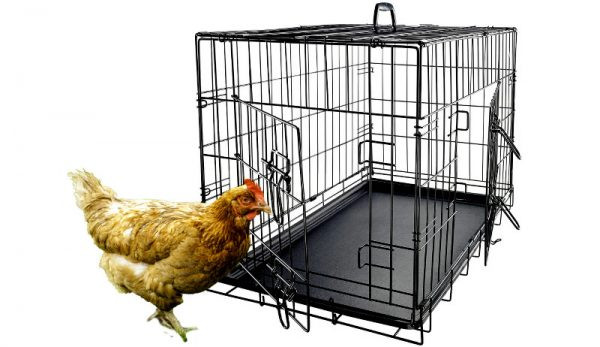 I enhanced my chicken-keeping abilities when I scavenged a dog crate someone left at the curb. How? Well, I call it the ‚Äúmetal kennel.‚ÄĚ My wife, Chris, and I have used it to sequester broody chickens until they got over their moods. It has also temporarily housed Black Dahlia, an adult Marans we adopted. Living in sight and smell of the home team‚ÄĒbut away from petty pecking‚ÄĒshe quickly became an adopted, if low-ranking, teammate.

Lately, we use the metal kennel as a halfway house for four pullets: an Easter Egger named Violetta; a Wyandotte, Stella D‚Äôoro; and two Dominiques, Domenica and Mezzaluna. My wife raised them from day-old chicks, keeping them in the shower stall in our mudroom. As they filled out, we planned to introduce them to their mentors, Buttercup and Poppy (Dahlia had passed away), but we wanted to avert bloodshed. As many of you know, chickens aren‚Äôt egalitarian, vegetarian or pacifist.

Just because we wanted new chickens didn‚Äôt mean our older chickens did. They see unfamiliar chickens as threats to their territory. They‚Äôre not dreaming of new friends to hang out with. Tossing some new pullets into the pen can lead to serious pecking. It doesn‚Äôt always lead to blood and feathers flying, but it can. And chickens react viciously to signs of blood. If you don‚Äôt want to ignite a civil war, a secondhand dog crate can be your best peacekeeping device.

Look for a dog crate that‚Äôs big enough for a medium or large dog, with dimensions of about 2-by-3-feet or bigger. If you can‚Äôt find one on a curb, you can certainly purchase a new one at any pet-supply or big-box store. You might find free or inexpensive ones online at Craigslist, Freecycle or other classified or social media site. The U.S. is overrun with people who have too much stuff and want to give it away or sell it cheap.

Most metal dog crates fold down flat so they don‚Äôt take up much room when not in use. As long as they are stored out of the rain or don‚Äôt get badly bent, they‚Äôll last indefinitely. Normally, they have a door in one or two sides. It‚Äôs most important to get one with a big lid on top that opens so you can access the metal kennel to refill the waterer and feeder.

We first used the kennel as a place for the growing chicks to become accustomed to the outdoors. We placed it in sight of the pen but on the lawn to give the chicks a place to scratch. Depending on the size of your chicks and the dimensions of the bars of the kennel, you might need to line the sides of the kennel with chicken wire or hardware cloth to keep small chicks from escaping.

Some kennel customizing might be in order. I used bolt cutters (a metal cutting blade on a circular saw, grinder or reciprocating saw will work, too) to remove the floor of the kennel so the growing chicks would have clear access to the lawn.

This modification has another benefit. When the crate is not in use, we flip it over and use it as a storage bin for chick/pullet/broody hen paraphernalia such as a big jar waterer, galvanized tube feeder, heat lamp, chick-size waterer and feeder, among other items.

In the Coop It Goes

After two or three months, when the chicks become pullets, it‚Äôs time to put them and the halfway house inside the pen. We adjust one of the kennel doors with just enough of a gap so that the pullets can get in and out but the hens can‚Äôt get inside to torment them. A tent stake or a landscape staple will do. Anything will work as long as it‚Äôs sturdy enough to keep the door opening from being moved and locking the pullets out or letting the hens in.

Because the pullets won‚Äôt have access to the coop just yet, anchor a tarp or some other protection over the top of the kennel to keep the rain out. We use the lids from a couple of plastic totes anchored by bricks. We also insert a stick or two through the bars of the kennel to provide the chicks and pullets roosts.

After putting the pullets and their halfway house in the pen, the adult hen that‚Äôs lowest in the pecking order will probably feel compelled to assert her dominance over her new neighbors. Our dominant hen, Buttercup, paid them almost no attention in her certainty that her deputy, Poppy, would remind them of their place.

When we tossed kitchen scraps into the pen, we spread them farther than usual, so the pullets could congregate privately around a small pile of melon trimmings and overmature cucumbers at one end of the pen and leave Buttercup and Poppy to the bigger pile at the other end of the pen.

For a month or so, Poppy demanded lots of personal space for herself and chased the pullets around the pen frequently. But as the pullets got better about keeping their distance and Poppy became more confident that her No. 2 slot was safe, they all started rubbing shoulders at the waterer during the course of the day. But whenever Poppy got excitable, the pullets would leap on top of or scramble into the safety of the kennel.

At the end of a second or third month of using the crate, we‚Äôll pull it out, hose it down, load it with chicken supplies, and then stash it in the garage. Soon, we‚Äôll have six adult hens that will act like they‚Äôve always been a team, and perhaps, in their minds, they won‚Äôt remember anything different‚ÄĒno blood, no fouls, no errors. I wonder whether I can remember the address of the person who put that dog crate on the curb? Maybe I should write them a thank-you note.