Adjust your coop systems by focusing on chickens' access to healthy, clean food and water as well as environmental conditions, especially temperature. 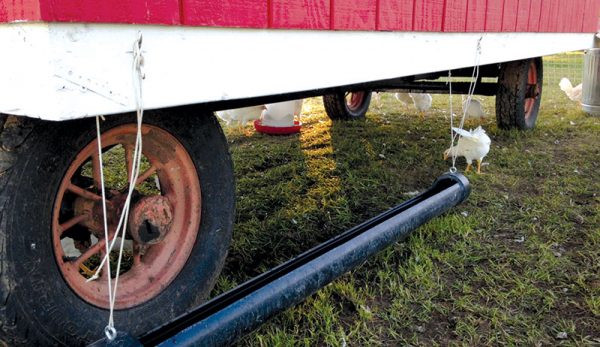 While â€śtried and trueâ€ť and â€śIf it ainâ€™t broke, donâ€™t fix itâ€ť can be wise rules to live by when managing backyard chickens, itâ€™s important to not â€śbury your head in the chicken litterâ€ť when it comes to improving your coop. To that point, many chicken keepers are by nature tinkerers following in the tradition of farmers who throughout history focused on developing more efficient ways to produce food (such as the cotton gin).

Our group of engineers and veterinarians at the University of California, Davis, has focused on developing innovations for free-range and pastured-poultry producers. While all our developments might not be exactly what works in your backyard, itâ€™s often helpful to have some baseline knowledge about what worked and what didnâ€™t.

The most important things to consider when making changes to your systems are to ensure your birds have access to clean food, cool and clean water, and comfortable environmental conditions, such as temperature, space, humidity and noise level. When housing your chickens, take note of extreme temperature and weather in your specific environment and how that can affect their access to feed and water.

For example, the vitamins in feed can be inactivated from extreme heat, and toxic mold can form in moist environments. Therefore, when considering any changes, think about how those innovations will affect your flocksâ€™ access to feed and water and their surrounding environment with respect to temperature and air quality.

Around-the-clock access to clean water is essential for chickens. Many backyard chickens have waterers that are manually filled as opposed to waterers that offer continuous water from a pipe connected to a waterer, which is ideal. However, not everyone has that option.

To reduce the dependence and risks associated with having to fill up the waterer every day, hook up a watering system from an elevated 50-gallon rain barrel to a water trough in order to facilitate gravity-fed watering. Youâ€™ll only need to refill the rain barrel andâ€”depending on the size of your flockâ€”it requires refilling less often. A float can be attached to the rain barrel to identify when the water level is low.

With respect to the trough, we used two 3-inch ABS pipes with the top half cut off as a basin for the water, suspended by ropes to the underside of the mobile coop. (See photo on opposite page.) A float valve was attached using eyebolts to the far end in order to continuously replace water as the birds drank it. The valve was attached to polyethylene drip–irrigation tubing that uses a gravity-fed system to bring water down from a rain barrel, which was affixed to the back of our egg mobile (pictured above).

In practice, this means that after the rain barrel is filled, water flows down the irrigation tubing into the ABS pipe troughs, where itâ€™s controlled through the float valve. In addition, we attached a rope pulley system that affixed the trough to the coop to allow us to level the trough. It was also useful to adjust the height in order to discourage roosting on the trough itself.

Our birds are housed in the coop at night and have access to the inside of the coop and outside fenced-in area during daylight hours. In order to facilitate this, we used automatic sliding doors on two small openings on either side of our coop. These doors were hooked up to a timer, which controlled a rope pulley system that opened and closed the doors. The birds were let out of the coop automatically in the morning, and the doors shut at sunset with the timing being adjusted depending on the season.

The doors themselves were simple plywood sheets that ran up and down a furring strip board track in order to steady them and keep them in place. This secures the birds at night when predators are more prevalent, and the automation reduces the possibility of a human making a mistake. However, at dusk, when the doors close, itâ€™s important to make sure there arenâ€™t any birds on the wrong side of the sliding door.

Note: Most of our birds acclimated well to the closing times of the doors if we coordinated them to around sunset. It took only a few days of â€śchicken herdingâ€ť to get them used to the drill.

In geographical areas that have the potential for extreme heat, temperature control can be a constant struggle when you have your birds exposed to the elements for most of the day. Signs of heat stress in birds include panting, spreading of wings and lethargy. Our solution was to build portable shade structures, placed strategically around food and water to encourage the birds to congregate in areas that are cooler. We noticed with our flock would dig small, shallow holes in the dirt under these structures in order to cool themselves furtherâ€”a tactic that helped even the hottest birds feel comfortable in extreme heat. The structures have the additional advantage of helping the birds avoid raptors in open spaces.

Our optimized shade structures were simple to build. We interlocked 10-foot PVC pipe with PVC fitting joints to make a â€śtableâ€ť structure that supported a 10-by-5-foot shade cloth. The cloth was easily affixed to the PVC with zip ties (also easily replaceable if your birds peck at them to the point of them breaking, like ours did).

These shade structures provided shade without causing excessive insulation because of the porous nature of the shade cloth; using a heavier cloth or plastic could trap heat around your birds when youâ€™re trying to cool them down. Be sure to build enough shade to allow your entire flock to use the structures simultaneously. A general rule of thumb is about 2 square feet of shade per chicken.

We built lightweight structures so they could easily be moved by a single person. This was useful, as birds love to hang out under them and mow down all the grass underneath them.

By focusing on access to healthy and clean food and water, plus optimization of their environmental conditions with respect to temperature, you will go a long way toward ensuring the overall health of your flock. We suggest to be a tinkerer if you like but make sure you follow the golden rule of medicine, and when you tinker, ensure that the changes improve the overall health and well-being of your flock. Y

This article, whichÂ originally appeared in the November/December 2017 issue of Chickens magazine, was written by Hannah South-gate, an animal science and psychology major at UC-Davis, and Maurice Pitesky, D.V.M.