Raccoons persisted until finding a way into one of our coops and killing all but 2 chickens. Here are potential weak points and how to secure them. 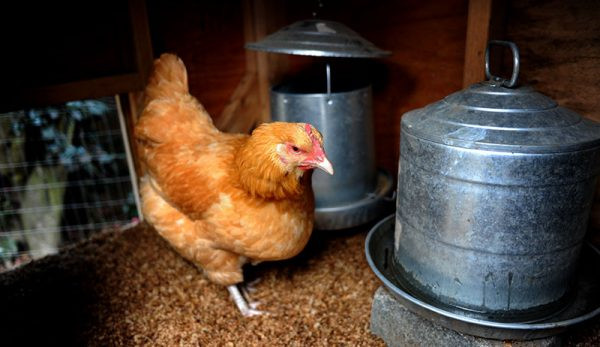 I wonâ€™t show you the photos of the carnage. I will tell you that, except for one young injured pair, our entire flock of Silkies was slaughtered inside what my husband and I considered to be an impenetrable coop. We were shocked, grief stricken, infuriated and confused. We spent much of the day trying to make sense out of the senseless.

After confirming that we’d locked up our little fluffs properly the previous evening, we looked more closely at the damage. The marauders pulled down the wooden support for a watering system not yet installed. It was mounted on the outside and had not affected the structure. The predators found a wooden plank containing a knot and worked at it until the knot fell inward, but the hole was much too small to let them in. The human access door was bowed from their attempts to break it down. But it held steady.

And then they apparently found the pop door.

Our two survivors, Ro and Natalya, have been treated for their wounds and are in a hospital tractor close to our kitchen where we can see them. The victims were buried with many tears. Several of these Silkies were our sonsâ€™ longtime chicken pets. The coop itself is cleaned out and closed up while we determine whether we can salvage it. Ro and Natalya, the survivors, will eventually need a sturdier home for the winter, but that pop door is problematic. Jae built the Silkie coop to accommodate an automatic pop-door timer/opener, which has now been rendered useless. We might simply put a wooden door with a hinge and carabiner on the outside, then do the same for our main Orpington coop, which has the same system.

When I first posted about our Silkie slaughter on social media, I was saddened to discover that many fellow chicken-keepers have experienced slaughters and losses this spring and summer. Yes, there will be loss anywhere predators can be found (which is pretty much anywhere you can keep chickens). What stunned me is that the number of outright unrelenting attacks seems to have increased dramatically this year. I am not a zoologist but I canâ€™t help but wonder whether the massive, extended heat wave we experienced weeks ago affected wild predators adversely. Perhaps it killed off other, bigger sources of prey? I have seen fewer chipmunks, squirrels and field mice this summer. Whatever the cause in the predatory upsurge, one fact had been clearly outlined.

No coop is impenetrable.

Is your henhouse is a fortress of safety? Go through this quick checklist to discover any weak points.

Ventilation is part of good chicken coop design, and if your coopâ€™s ventilation openings are covered in quarter-inch hardware mesh, great. But how well is that mesh attached to the coop? If you tacked down the corners with nails or screws, you need more. The tips of raccoon and opossum claws can fit through the tiny openings and give these predators enough leverage to yank the mesh right off your coop. For better security, use washers and screw these in every 2 inches.

Whether you use wooden planks, pallet wood or compressed wood, your coop is only as safe as the seams between its boards. Caulking the seams keeps the elements out but, as the caulk slowly weathers, these areas become weak points that might not stand up to continual prodding and full-scale attacks. Add crossbeams on the interior and check each plank for knots. Discard any knotted board, as these are also weak points that might allow access to a predatory arm.

What holds true for wooden walls holds true for wooden floors. Adding a floor cover, such as a sheet of linoleum (not individual peel-and-stick squares) gives your floor an additional barrier of protection. However, inspect for knots, use cross beams and caulk all seams. If you use a natural floor, take careful note of any digging along the exterior of your coop. Raccoons are excellent diggers (read this article about the behaviors of various predators), and even a small hole can provide enough access to grab eggs, chicks, juveniles and even full-grown hens. If you use a natural floor, consider using concrete bastions, patio slabs or retaining-wall bricks as barriers to digging. Create a trench at least 1 foot deep along the coopâ€™s perimeter, put these blocks in place, then cover them up with dirt and sod. A predator might still tunnel its way in from several feet away, but youâ€™ve just made it work a lot harder, and in a way you’re more likely to notice before it gets in.

If your coop has windows, make sure each one is fully locked shut from the inside. Opening windows for added ventilation in summer is nice but also unsafe. Many coop windows do not have secure screensâ€”or screens at all. Windows that are easily lifted by humans can also be lifted by larger raccoons, especially if the windows are the easy-lift, glide-open type. It’s best to keep the windows locked and caulk them shut as well.

Doors are the weakest spot on a coop, as they are meant to open and shut with ease. Whether itâ€™s the door to your layersâ€™ nest box, the human-access door or the birdsâ€™ pop door, these entryways can easily turn into predator access points. We learned this the hard way with our Silkies. To deter wild carnivores as much as possible, use solid wood for all three entrances. Wood paneling and plywood simply do not have the strength to stand up to predators. They also deteriorate and attract lichen and mold much more rapidly. Have the wood cut to your coopâ€™s specific dimensions so there is no weak seam. Securely fasten your door with heavy duty metal hinges, and use latches with carabiners to keep the doors locked in place when not in use. Nimble raccoon paws can figure out how to open a snap-hook lock but the intricacy of a carabiner is beyond them, at least for now.