A Guide To Digestive Health In Chickens, From Beak To Tail

Keeping your flock internally healthy starts with what the chickens are or are not eating. 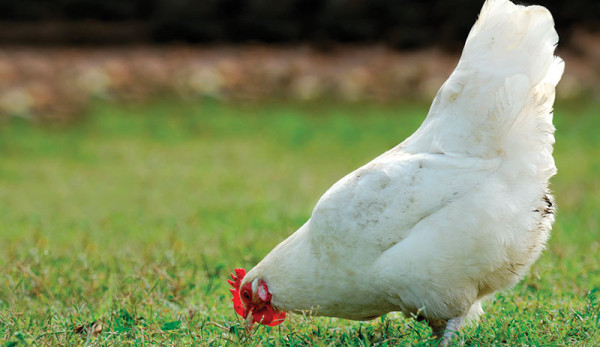 Peck around in online poultry forums and youāre bound to find chicken keepers talking about poop. Thereās a lot of it, and knowing how it looks and smells can provide clues to digestive health. Even so, according to Gail Damerow, author of The Chicken Health Handbook (2015, 2nd edition), too many people are obsessing about what their chickens eat and what their poop looks like.

She currently keeps 30 Rhode Island Reds for eggs on her Tennessee farm and a dozen black Silkies for fun. Damerow does watch their poop for signs of trouble, which weāll review later.

āBut some degree of variation in color and texture is normal, just like with humans,ā she explains.

How The Process Begins

Weāll get back to the tail end of chicken digestion and digestive health in a moment. First, letās talk about where digestion starts: the beak. Because chickens do not have any teeth, the beak is an important tool that begins the digestive process.

When eating, chickens pick up and drop larger food items to tear them into smaller pieces they can swallow. Swallowed food moves down the esophagus to a pouch called the crop. You might have noticed the crop as a bulging area at the base of a chickenās neck. Chickens gobble up food while on the lookout for predators. The crop provides a place to store the quickly eaten food until later, when the birds get to a protected area and can digest in peace. Depending on the food, its consistency and the amount of moisture, the crop empties to the stomach a little at a time, which can take as long as 24 hours. Though fairly rare, crops can also be affected by too much grass, overeating soft treats and not drinking enough water.

In the stomach, digestive acids and enzymes begin softening whatās been eaten for passage to the gizzardāa sort of second stomach with a tough lining. The gizzard holds small stones called gastroliths, which are necessary components of a chickenās diet. The gizzardās strong muscle contractions agitate the food against the grit, similar to how we chew with our teeth.

Food then passes from the gizzard into the intestines where nutrients are absorbed. Intestinal pockets called ceca collect fibrous food, where bacterial action further breaks it down. Eventually, waste matter from the digestive and urinary tracts combine in the cloaca and gather in a fecal chamber for expulsion through the vent.

So what is a proper diet that will keep optimum digestive health among your chickens? Michelle Koeppe, owner of Phasian Farms in Sherwood, Oregon, recommends a varied diet with good foundational food. She uses an all-purpose food because her flock ranges in age and includes male birds that donāt need the additional calcium provided by layer feeds.

In addition to commercial feeds designated as all-purpose and layer, there are starter feeds for young chicks. Some of these are medicated. Commercial feeds are nutritionally balanced and are the simplest way to ensure a flockās general health and digestive health in particular.

Koeppeās birds also free-range for greens and insects, and she supplements with legumes and medicinal herbs, including nettles, oregano and mint. Variety can help provide a nutritionally balanced diet, and it stimulates chickens mentally so theyāre happier.

Because chickens can get worms, Koeppe adds lavender and rosemary to the bedding, which the chickens nibble.

āThese are beneficial to the digestive tract and serve as a natural agent that destroys or expels parasitic worms,ā she says.

Also, as a worming preventative, she provides a monthly dose of garlic in the chickens’ drinking water by steeping eight small to medium cloves per gallon overnight. (This small amount of garlic isnāt likely to affect the taste of the eggs.)

For her mixed flock of around 100, Koeppe occasionally puts out a charred piece of wood for her hens to peck.

āCharcoal is beneficial to a clean digestive tract,ā she says.

Lorree Cummings, who owns Stone Cottage Farm & Garden in Summit County, Ohio, ensures digestive health by making sure greens are always available. As her fast-growing meat birds get heavy, she puts out kale and other greens, anchored with stones in clay pots near their feeder.

Ample water is also vital for good digestion. Cummings, who has been keeping chickens for more than 40 years, gives her birds natural spring water free of chlorine or fluoride.

Variety Is Good, But Quick Change Is Bad

Chickens are hearty and enjoy variety, but Damerow cautions against getting carried away with feed recipes from ill-informed sources.

āFind a brand of commercial ration that works well for you, and make that the primary source of nutrients,ā she says. āThe biggest thing to avoid is sudden or abrupt changes in a flockās diet.ā

When changing feeds, Damerow recommends mixing them and gradually increasing the one youāre switching to.

She also advises keeping treats to a minimum and being careful of corn. Feeding too much corn, alone or in scratch and grain mixes, can lead to obesity.

āAn obese hen doesnāt lay a lot of eggs,ā she says, adding that obesity is a major reason many backyard hens stop laying early and then experience health problems.

Brett Ottolenghi, owner of Artisanal Foods in Amargosa, Nevada, couldnāt find commercial feed without soy or corn. His solution was to plant triticale, a wheat-and-rye hybrid grain, which gets ground with alfalfa for his birdsā feed.

A 40-acre pistachio grove provides Ottolenghiās flock with cover from overhead predators. They roost in the trees, reminiscent of junglefowl, the ancestors of todayās domestic chickens. On acreage that contains calcium-rich caliche, which is good for the formation of eggs, the flock density is a generous 108 square feet per bird.

His flock is now a mix of heritage breeds that lay for restaurants on the Las Vegas strip. In addition to triticale grains, the greens of the plants are fed. So is fruit from old apricot and pomegranate trees on site, and any fallen pistachios.

Know The Evidence Upon Exit

Chickens should excrete both kinds. Beyond these, be alert for trouble signs: Damerow advises keepers to look for tinges of blood, new odors or exceedingly runny droppings. Sheās also quick to add that runny poop can occur when chickens drink a lot of water in hot weather or eat juicy treats such as watermelon. Color changes, too, might not be cause for concern. If your chickensā poop looks suddenly different, consider what theyāre being fed thatās different or new: Reddish poop might be from beets you recently fed them.

Koeppe concurs, saying that about a third of daily droppings might be wet or loose because of ample greens and water but are nothing to worry about.

āThe first droppings of the day are quite large,ā she says.

A broody hen that seldom leaves the nest will also have extremely large droppings.

āFrom time to time, there might be reddish strings in droppings, whichāif inertāis old intestinal lining being shed,ā Koeppe says. āWhat would be of concern are droppings with what looks like coffee grinds in them, which suggests internal bleeding.ā

Moving worms in droppings, consistently runny or bloody poops, or droppings that stick to the vent are also cause for concern.

Knowing how much your flock typically eats can also provide information. Thatās why Koeppe suggests feeding a determined amount of food sometimes instead of free-feeding, because youāre able to tell when the flockās appetite changes.

āIf birds are not eating heartily, are acting lethargic or are remaining solitary with their plumage puffed out, itās time to get a closer look,ā she says.

Isolating birds that show signs of trouble is wise, and a vet visit is prudent.

Damerow once raised a batch of chicks from eggs laid by her chickens.

After eliminating stress and the possibility of a genetic tendency, she concluded that it must be a dietary issue. One by one, she increased their protein, added more fiber and offered supplements. Nothing helped. She then switched from a national feed brand to a regionally produced non-GMO feed, with no more picking issues.

āIām not saying the picking problem was caused by GMOs in the ration,ā she says. āIām just observing that we saw no more picking after we switched to a different brand.ā

The experience leads her to offer this advice: āIf chickens donāt do well on one brand of feed, try another.ā

She also advises to keep clean drinking water available at all times.

Damerowās right that thereās no need to obsess over food and poop. Follow these simple tips and sound advice for healthy birds in your own chicken paradise.

Some chicken keepers supplement their flocks’ diet with yogurt, which adds beneficial calcium and protein.

“Chickens do produce lactase and can absorb it in small quantities,” says Koeppe.

She makes her own yogurt from a neighbor’s unprocessed goat’s milk, believing it might be easier to process than pasteurized products.

Damerow agrees. She keeps dairy goats and mixes surplus milk with hay “fines” from the bottom of the manger. She lets it sit overnight.

“By morning, the milk has coagulated and smells pleasantly herbal,” she says. “The chickens love it. This is raw milk straight from the goat, mind you. I would not recommend doing this with pasteurized milk.”

Free-range chickens might pick up small stones as they peck about, but most keepers agree that it’s wise to offer packaged supplemental grit if your chickens are eating anything besides commercial feed. Crushed oyster shell is also a necessary supplement for laying hens.

This article originally appeared in the May/June 2017 issue of Chickens.