A USDA study shows a chicken intestinal molecule can prevent coccidosis in chickens without using antibiotics. 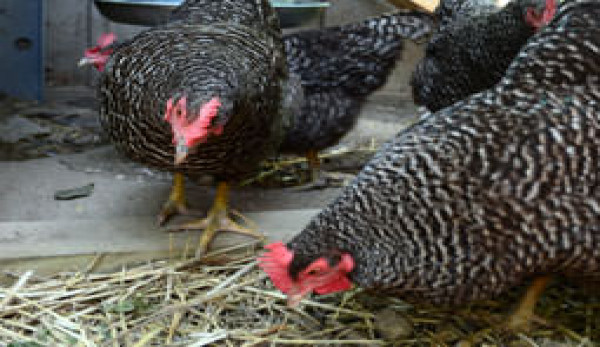 Identifying antimicrobial proteins in chickens that kill pathogens is one method being used by USDA scientists to findĀ alternatives to the use of antibiotics to control infectious poultry diseases.

Each year, poultry diseases, such as coccidiosis, result in more than $600 million lost in the United States and $3.2 billion lost worldwide.

Some molecules host antimicrobial proteins that can kill pathogens, improve immune responses and promote the growth of beneficial gut bacterial populations in poultry, according to Lillehoj, who works in the Animal Parasitic Diseases Laboratory at BARC. She and her colleagues have identified one such immune molecule, called NK lysin.

Lillehoj and her colleagues demonstrated for the first time that NK lysin kills chicken coccidia. They also showed that this antimicrobial protein or host defense molecule is effective against other parasites such as Neospora and Cryptosporidia, which infect livestock and humans, respectively. One commercial company is looking at the possibility of developing NK lysin into a product that can be used to kill chicken intestinal parasites.

Lillehoj also is studying enteric bacterial infections caused by Clostridium, a pathogen associated with necrotic enteritis in poultry. She is using a similar molecular technology to develop alternatives to treat this disease.

Working with industry and international partners and other scientists, Lillehoj has discovered other options to antibiotic use in poultry. Phytochemicals derived from peppers, plums, safflower, green tea and other plants have been shown to be effective in enhancing the immune system of chickens. Also, the beneficial effects of probiotics, which are live, nonpathogenic bacteria that promote health and balance of the intestinal tract microbiota, have been demonstrated in past research.

Read more about this research in the May/June 2012 issue of Agricultural Research magazine.