What A Chicken Eats Can Cause Health Woes & Toxicity

If a chicken can get something in its mouth, there's a chance it'll swallow it down—and that can lead to health problems and even toxicity. 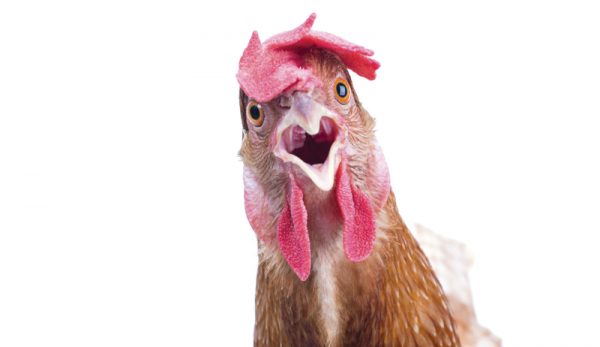 Everyone has heard about the curious dog that has eaten something inedible, from too many tennis balls to a stuffed bear, expensive jewelry to rusty bolts. Even the underwear that was left on the floor isn’t safe from a dog.

Well, chicken-keepers beware: Your chickens are indiscriminate eaters, too! Chickens instinctively pick through the ground in search of something edible. If a chicken can get it in its mouth, it’s fully acceptable to them as a food item, whether there is any real nutritional value or not.

The problem with this behavior is that some items a chicken picks up can be hazardous to its health. As a veterinarian, I have taken many items out of chicken crops and stomachs that should not have been there.

Take, for example, the time a chicken was brought into my office because it just wasn’t feeling well. The owners noticed their hen was laying down more and felt that she was acting quieter than typical. Her examination revealed what felt like a beanbag inside of her.

A radiograph (X-ray) of her abdomen exposed that her crop, stomach and intestines were filled with gravel! She had to have several days of laxatives and fluids to help move things along. The hen also required medications to help with ulcers in her stomach and intestines caused by the gravel abrading against the inner surface of her gastrointestinal tract.

She made a full recovery, and her owners made sure she was never allowed to walk on the rocks again!

Chicken-keepers need to ask the veterinarian these 7 questions.

Another chicken presented after walking around wobbly and acting quiet. A radiograph for her belly showed numerous small objects in her stomach that didn’t look like they would be able to pass out on their own. Therefore, we decided to take her to surgery to remove them.

When we opened up her gizzard, we found she had pieces of glass and a battery from a watch!

She was one lucky chicken. The glass had become ground down and smooth on its sides from grinding against other small rocks and grit in her gizzard—almost the way glass on a beach will become smooth from the sand!

On a different occasion, a chicken came into the hospital after it had gotten into the garbage the owner had placed outside. There was expired ground beef in the bag, and the chicken ate it all. Her crop was full of this putrid trash, and she was inappetent (lacked an appetite) and depressed.

A culture revealed that this old meat had E. coli growing in it, and now she was sick from it and suffering from secondary kidney disease. She had to have a surgical procedure called an ingluviotomy to remove everything. Take my word for it, it did not smell very pleasant!

After a few days of intravenous fluid and antibiotic support after the surgery, she was able to go home.

Sometimes, even objects that may seem to be benign and normally in a chicken’s environment can prove to be problematic. One hen that was low in the ranks of the pecking order was being bullied away from her food. This caused her to peck at the bedding in her coup, and she ingested more than was safe.

When she finally came into the hospital, her crop was filled to the brim with aspen shavings, and she was severely underweight. It took several evacuations of the crop, followed by intensive supportive care to get her back to health.

Getting the Lead Out

Although all these previously mentioned items could have been deadly if not addressed appropriately, the ones that are the most problematic have been metallic objects. Countless chickens have come into the hospital with a metallic object identified after a radiograph is taken.

Bolts, screws, wires and nails have all been found. Sometimes the owners are aware that their chicken got into something. But more often than not, the owners are surprised that the chicken found these metallic objects.

I always remind owners that chickens are ground foragers. It’s in their nature to scratch at the ground and dig things up in search of food. Additionally, they are naturally curious and will test anything out as a food item.

A chicken necropsy can help with a mystery death hits the coop.

There are a few problems with metallic objects being ingested by chickens. First, if the object is sharp or pointy, such as a screw or nail, it has the potential to cause physical damage to the crop, stomach or intestines.

These objects can directly scrape along the wall of the gut and cause irritation, bleeding and pain. This can also create an environment for opportunistic organisms to overgrow and cause infection, further complicating the issue.

In severe cases, these objects can even penetrate through the wall of the gut and lead to serious debilitating infections, pain and even death. Surgery is often needed for the birds to rid them of these objects and help heal the wounds they have caused.

Probably even more damaging than the physical trauma these objects can cause is the toxicities that can be encountered. Objects that contain heavy metals, such as lead, can cause toxicity in a chicken.

When objects that have lead—such as bullets, wires or even contaminated soils—get into the gut, the stomach acids work away at the object causing lead to be released. This then makes the lead available to be absorbed and get into the blood stream.

Once in the blood stream, lead can circulate to organs and cause damage. Various symptoms might be seen such as inappetence, quiet behaviors, loose stools, wobbly walking, weakness and even seizures.

The big problem that can occur with heavy metal toxicity in a chicken, though, is that this lead can get into eggs if the hen happens to be laying. For the humans consuming these eggs, it could be a major human health problem.

Depending upon how much gets into the egg, it could potentially be above the acceptable levels of lead for a human to consume. It could even get into the toxic range. That nice, backyard, humanely raised, organic chicken egg may not be so healthy after all if this problem is present.

This exact problem occurred with a hen named Lucille not too long ago. Lucille was brought into the hospital for an exam because her owner noticed she had a “leaky” bottom. Stool was dripping from her vent making her bottom rather messy.

When a radiograph was taken to look internally, it was discovered that she had a metal wire in her gizzard!

Based on its location, it was apparent that this spiky object was stuck. Surgery was immediately recommended, and a 1-inch-long threaded wire was pulled out of gizzard from a site where it was already poking through the wall.

After Lucille was recovered from the surgery, a blood sample was sent out for analysis, and the chicken was found to have lead toxicity. Therefore, the chicken was put on treatments geared toward helping heal from the major surgery she just endured as well as treatments aimed at dealing with the toxicity.

Fall is a great time to consider getting chickens.

The story doesn’t end there, though, because Lucille was still laying eggs. In fact, she had laid an egg just a day before she came into the hospital. This egg was sent out for analysis, and it was found to have 14 micrograms of lead present.

To understand what this means one must first develop a frame of reference for what is and is not considered accepted for lead contamination in foods.

Ideally, food items should not have any lead present as it’s not physiologically needed by the body. However, below certain levels it should not be toxic. The USDA recommends that the daily maximum of lead intake for children be no more than 3 micrograms and for adults be no more than 12.5 micrograms.

This means, in Lucille’s case, if a child ate her egg, they would be consuming nearly five times more than the daily-recommended level of lead intake for a child. Even an adult would be above their daily recommendation.

Additionally, lead can accumulate in tissues and build up to a point where it does reach toxic levels.

The good news is that a veterinarian can treat a chicken that has lead toxicity. This often involves treatment with a chelation medication that works to bind up lead in the body and help it to be excreted.

If a chicken does have lead toxicity, it’s currently recommended that the eggs from birds that have had lead toxicity not be consumed—ever. This means, the bird should be permanently retired as a layer. However, she can still make a good pet.

Chickens consuming inappropriate items have the potential to be a real nightmare for the urban farmer.

But fear not. Be vigilant with your observations of your flock. Monitor what they have access to. Create appropriate barriers to places they should not explore. And test your soil for heavy metals. These measures can be helpful prevention tactics.

And always remember that an ounce of prevention is worth a pound of cure!

Lead poisoning can be a problem in backyard urban chickens. It can be detrimental to the bird’s health, as well as to the humans who consume the eggs laid by the hens. A chicken with lead poison might present the following signs or show no signs at all.

Just like in chickens, lead toxicity in humans can lead to damage to the nervous system, kidneys and other major organs. It can cause anemia (low red blood cells) and accumulate in the bones. When it damages the nervous system, it can impair an individual’s ability to learn, result in behavioral problems and even cause seizures.

If left untreated, lead toxicity can be just as deadly in humans as it can be in chickens.

Due to this, one can see that heavy metal toxicity in chickens can be a very serious problem to deal with. Don’t worry, though, as there are things that can be done.

First, when getting a flock of chickens, consider having your soil tested for lead.

Next, put down several inches of fresh substrate so that they have layers of safe material to dig through. Make sure to inspect the area where your flock will have access to, and pick up any objects that could be dangerous or contain heavy metals.

Next, if you think your bird is showing any signs consistent with lead toxicity, then take them to your veterinarian. Remember, though: Not all birds with heavy metal toxicity will show outward signs.

So, if your veterinarian thinks it is a good idea to have your birds tested, follow their recommendations. A blood test is a simple procedure that can be done to check for evidence of lead toxicity.

Additionally, test the eggs. The California Animal Health and Food Safety Laboratory will accept eggs from urban flocks and test them for the presence of lead. Other laboratories may also perform this test, so make sure to check with your local poultry veterinarian to find out where you can send samples.

This article first appeared in the July/August 2020 issue of Chickens magazine.