Minimize the mess and make chicken chores a breeze by selecting the right feeders and waterers for your coop. 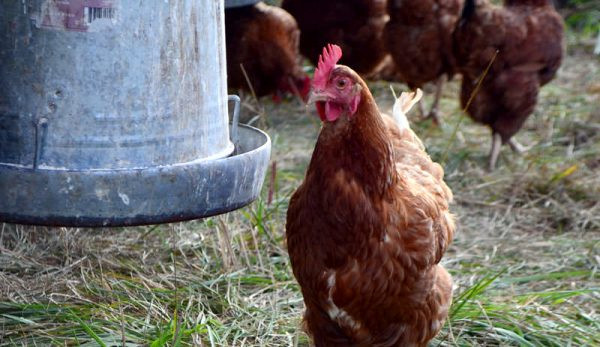 Shopping for chicken feeders and waterers wouldnâ€™t be so complicated if the birds didnâ€™t act like they were born in a barn. We could just put out containers, and theyâ€™d politely take their sip and nip, and go their way without leaving droppings and debris or billing out half the food onto the floor. But they donâ€™t, and the multiplicity of designs, sizes, materials, and prices of feeders and waterers can make selection feel complicated. However, behind all the options are basics that facilitate informed decisions.

Pans
You can rule out pans pretty quickly unless you just love changing your chickensâ€™ water twice or more per day. Setting a pan of water out for them to drink is like inviting them to a foot washing. Then, after they add a few droppings, they finish by scratching debris into the pan. Strombergâ€™s Chicks & Game Birds Unlimited sells a plastic platform to lift feeders or waterers off the floor, which can help minimize the debris problem, but no bird worth its feed is deterred from perching on and pooping in an open water pan. Bottom line: Contaminated water is not healthy.

Gravity-Fed Waterers
These are available in top-filled, bottom-filled or two-piece construction, that you take apart to fill. “It comes down to practicality,â€ť says Chris Huseman, PhD, director of marketing for Murray McMurray Hatchery. “You need to think about how you would use each waterer option, and how [it fits] into your particular coop.â€ť Huseman also suggests looking at whoâ€™s going to be doing the watering. “If [you] can lift heavy items, maybe you donâ€™t have to be as discreet about waterer type.â€ť Keep in mind that 5 gallons of water weighs approximately 42 pounds, and though not as bad as an open pan, gravity waterers still gather debris and droppings. Again, a raised platform is your friend.

“Nipple waterers are very popular and have been used with success for years and years,â€ť says Eric Stromberg, manager at Strombergâ€™s. The BriteTap, a product consisting of watering nipples in a clear, strong polycarbonate conduit that can be screwed into anything from a bucket to a drink cooler shields the chickensâ€™ water from contamination and is easy to clean when necessary. The BriteTap waterer, developed by Mark Delman, general manager at ChickenWaterer.com, also helps prevent the buildup of biofilm. “Biofilm is a mixture of various fungi, bacteria and viruses,â€ť Delman says. If BriteTap needs to be cleaned, you can pull the end caps and clean with a bottle brush. “Because itâ€™s clear, you can visually inspect to make sure youâ€™ve cleaned it out well, which you cannot do with a PVC pipe setup.â€ť

Whether gravity-fed or automatic, waterers can collect bacteria. Strombergâ€™s sells agricultural cleaners, such as Tek-trol or Virkon, to help control bacterial buildup. “Virkon is a very affordable one. Itâ€™s a newer product for us, and itâ€™s nice because itâ€™s just a tablet. Iâ€™ll throw my whole waterer into a big tub, and then Iâ€™ll put a couple of tablets in there and just let it sit for a while, then scrub with a brush,â€ť Stromberg says.

Automatic cups that hook into tubing or gravity systems are another option, and they donâ€™t drip, while nipples sometimes do. Waterers range from less than $10 to around $100.

TroughsThere are beaucoup de variations on these themes and space will be a factor in your choice, but feeders can be lumped into two general categories: troughs and hanging feeders.

Both Strombergâ€™s and Murray McMurray sell everything from range feeders holding 50 pounds of feed or more to chick feeders that screw on a mason jar. Because troughs have somewhat the same challenges as pan waterers, setting the feeder to the height of the chickensâ€™ backs helps reduce debris being scratched into the feed, and grids help prevent food wastage and deflect droppings. Wall troughs with gravity-fed hoppers also work well for feeding free-choice oyster shell and grit.

Troughs range in cost from around $15 to more than $100, depending on size, design and material.

Hanging feeders
“The birds have access to 360 degrees of feed in the trough, and since itâ€™s up off the ground, theyâ€™re not allowed as much chance to kick stuff up into it,â€ť Stromberg says.

Kathy Shea Mormino, aka the Chicken Chick, recommends a treadle feeder, a variation of a trough feeder, which is opened by the weight of the chicken, and closes again when the bird steps off. This keeps the food clean, prevents feed waste from billing out, and helps discourage rodent access.

Hanging feeders can run anywhere from $15 to more than $50, depending on material and manufacturer.

Choose the Right Material
Plastic and galvanized metal are the two main Â­choices for manufactured feeder and waterer materials, and each has its merits. “I prefer the plastic waterers because you can see the water level. Theyâ€™re also pretty easy to clean,â€ť Stromberg says.

“Galvanized feeders and waterers have a more traditional look and are the better choice for longevity,â€ť Huseman says. Galvanized units tend to be the most durable options, but on occasion, a galvanized fount might get bent to the extent that the vacuum seal is compromised and the unit must be replaced. With plastic waterers, if a part breaks or a puppy chews on it, you can often replace just that piece.

In winter, galvanized founts can be set directly on a heated metal base, but only some bases are rated compatible with plastic. There are plastic units with built-in heated bases, too. Stromberg switches from plastic to galvanized waterers when winter sets in.

Ultimately, practicality, space, cleanliness and the caretakerâ€™s preferences should be considered, along with durability, ease of use and cleaning, feed accessibility, and economyâ€”and for waterers, winterizing options. Whatever you choose, you can be assured that if your chickens had any clue how much care you put into the selection, theyâ€™d be thankful.

This article originally appeared in the March/April 2014 issue of Hobby Farms.