Chicken Health A to Z (Part 4): Know the Ailments That Can Affect Your Flock

In the fourth part of this series, we continue alphabetically through chicken ailments, covering keel cyst, kinky back, Marek's and Newcastle diseases, and nutritional disorders. 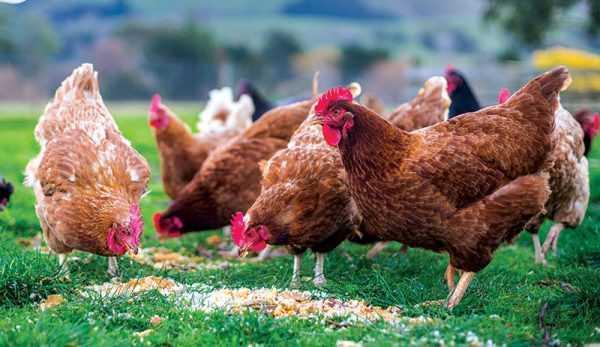 Did you know your birds can suffer greatly from dozens of chicken ailments that you an easily prevent?

This is good news for the chicken keeper. Read on to learn more about the chicken ailments we love to avoid, their treatments and, most importantly, their prevention.

In this installment, we cover the letters K through N, including some diseases every chicken keeper should know about, no matter the size of the flock. Letâ€™s start with keel cysts. (Read the other installments of the chicken ailments series here: Part 1, Part 2, Part 3, Part 5, Part 6.)

Better known simply as breast blisters, keel ailments are rather common and progress chronically. These blisters appear on the breasts of growing cockerels or particularly heavy-breasted breeds, each one starting as a blister and eventually growing into a thick callus.

The blister (hereâ€™s your warning of something unpleasant to come) is usually filled with a clear liquid, though it can be bloody or contain pus that is cheesy in consistency. Thankfully, mortality is low, and cycts can be prevented by simply keeping your birds in humane and sanitary conditions.

Breast blisters typically affect birds confined to cages or small spaces, where their breast bones rub or are pressed against wire cages, wire walls or roosts theyâ€™re forced to touch. Give your flock the space it needs and deserves, and your birds might never be at risk for keel concerns. Large-breasted cocks can be protected against blisters by padding roosts as necessary.

As long as a blister isnâ€™t infected, it wonâ€™t pose a threat to humans and isnâ€™t contagious between birds. Some experienced chicken keepers treat keel cysts at home by draining the blisters themselves, but for backyard keepers, itâ€™s highly recommended to consult an avian veterinarian should your bird develop a keel cyst.

â€śIf you think the breast blister is infected with bacteria, systemic or local antibiotic therapy might be helpful. Contact a local veterinarian for direction on this, as she might be able to obtain a sample of the bursa fluid for culture and sensitivity to better direct you to the best antibiotic,” says Kelli H. Jones, D.V.M., assistant clinical professor and extension poultry veterinarian at Mississippi State University College of Veterinary Medicineâ€™s Poultry Research and Diagnostic Laboratory. “Because breast blisters tend not to cause clinical effects, the best option might be to identify the initiating cause and to treat or fix that rather than potentially aggravate the blister by performing any manipulation, such as lancing, draining, rinsing or soaking.â€ť

Spondylolisthesis is the proper name for â€śkinky back,â€ť a joint and vertebrae issue usually related to a deformed spinal column. This ailment affects mostly broiler birds, so keepers of laying flocks have little to worry about among laying-breed birds. But if you raise birds for the table, itâ€™s a condition you should know about.

Kinky back is crippling, as the infection increases pressure on the spinal cord with excessive swelling. Thereâ€™s no cure, and itâ€™s always fatal. Prevention is the only way around this condition: Breed or purchase birds resistant to this ailment. Ask breeders or hatcheries if any of their birds have had spondylolisthesis.

With the birds you do have, feed them moderately and ration so that growth is consistent and not excessively rapid (knowing that broilers grow rather quickly anyway). The true cause is unknown, but donâ€™t breed birds that you suspect might be prone to this condition. Thankfully, itâ€™s not contagious to birds or humans.

Marekâ€™s is truly one of the more concerning chicken ailments to afflict backyard flocks. Itâ€™s common, easily spread and almost always deadly, making it a feared and frustrating issue for those who care for chickens.

A neurological illness, Marekâ€™s affects the nervous system as well as the organs and even skin. The disease is caused by six varieties of the herpes virus. It originates in the feather follicle and lives for years in the bedding and litter of flocks. It can be easily spread from flock to flock by walking in a healthy coop with shoes or boots that walked through a contaminated flock.

“Marekâ€™s disease, also referred to as visceral leukosis, fowl paralysis and range paralysis, is caused by a virus. The virus most commonly affects chickens between the ages of 12 to 25 weeks. â€¦ [It] is a type of avian cancer,â€ť says Jacquie Jacob, Poultrwy Extension Project Manager, University of Kentucky.

Symptoms of a Marekâ€™s case can vary widely. Most notably, a bird will appear paralyzed, probably because of the pressure put on the spinal cord by enlarged nerves and nodules. It might affect a birdâ€™s respiratory system, in which case a sick chicken will gasp or wheeze in addition to having trouble standing or stumbling often. Itâ€™s more common in pullets than cockerels, and death occurs usually within two months of the first symptoms appearing.

Prevention is best attained through several avenues. Firstly, practice extremely stringent biosecurity measures, especially when visiting other flocks or farms, buying chicks or handling chickens that arenâ€™t yours. Wash your hands between handling flocks, and keep your coop clean, regularly changing the bedding. The Marekâ€™s disease vaccine is one of the best methods of prevention, though it doesnâ€™t cover all six strains of the virus, in which case, breeding for resistance and keeping a clean coop can help prevent its spread.

Very few birds survive Marekâ€™s, and those that do are lifetime carriers. If you suspect one of your flock members has Marekâ€™s, separate it immediately from the rest of the flock, and take the individual bird to the vet for testing. The results should inform your next course of action, which usually includes a deep cleaning of the coop and new biosecurity measures.

Newcastle is another unpleasant disease, but the mortality rate is much less than other common chicken ailments. It is caused by the highly contagious paramyxovirus and is spread by ingesting the virus, either from the droppings of other birds or shared feed and water. Transfer can also be airborne.

Newcastle looks like a respiratory disease with the addition of nervous system symptoms. Birds will wheeze and gasp; hens will stop laying eggs. Farmers might see some discharge from a birdâ€™s nasal cavities. A veterinarian can confirm the diagnosis, so take your chicken in as soon as you suspect something.

Treat afflicted birds according to your vetâ€™s recommendations. Usually, birds must be kept warm, hydrated, fed and comfortable. Survivors of Newcastle will be carriers for as long as 30 days but will develop immunity.

Prevention is best done by breeding for genetic resistance. Unfortunately, while good sanitation and coop hygiene are imperative for so many issues, itâ€™s not really a factor when trying to prevent Newcastle. In this case, your best efforts might not make a difference. Lastly, be mindful of touching your face and eyes after handling a bird with Newcastle, as it can transmit a temporary eye infection to humans.

The U.S. Department of Agriculture calls Exotic Newcastle Disease a contagious and fatal disease affecting all species of birds. â€śPreviously known as velogenic viscerotropic Newcastle disease, END is one of the most infectious diseases of poultry in the world. The mortality in unvaccinated birds can reach 100 percent, and birds may die without any clinical signs of disease. Though recommended and widely used, vaccination does not fully protect against END and may obscure the disease, resulting in further spread.â€ť

It can make you feel helpless knowin your birds can be afflicted by crippling chicken ailments that are out of your control. Itâ€™s can be empowering, however, to know that nutritional support does a lot to protect your birds from many diseases, especially nutritional disorders.

Usually, all you need to keep a flock healthy are rations of fresh, organic feed; the necessary supplements, such as oyster shell and grit; and exposure to nontreated grass and pasture, which through grazing provide wonderful nutrients.

Lifeâ€™s natural stressors, though, can prevent birds from absorbing nutrientsâ€”just as it can with humans. This malabsorption can occur when birds are excessively and consistently stressed or moved often. It can occur after exposure to parasites, worms or viruses, and also from medication taken for the resulting chicken ailments. It can also happen when birds experience extreme and prolonged temperatures and poor environmental conditions. All of these factors can contribute to a chicken not being able to absorb, process and use the nutrients available to it.

The best place to start for optimum health is through nutrient-dense feed. Avoid chicken feed with soybean or soymeal in it, as it can stunt growth, especially in chicks. Choose organic, if possible.

In the U.S., conventional wheat and corn (the two main ingredients in most chicken feed) are often doused with glyphosate (the herbicide in the product called Roundup), a known carcinogen. Keep in mind that you are what your chickens eat.

Food storage is critically important yet easy to overlooked. Feed will lose nutrients as it is exposed to sunlight, moisture and air, rapidly declining in nutritional value if not stored properly. Keep only as much feed as your flock can consume within about six months, so the feed will retain nutrients. Always store in a dry, cool, airtight storage container or room.

Supplement your birdsâ€™ diet with plenty of free-range time, and provide clean, fresh drinking water at all times. Good nutrition is an investment in your flock that will support your healthy birds in every way, helping to prevent nutritional disorders and more, now and in the long run.

Thanks for joining me, and stay tuned for the next installment, where weâ€™ll address chicken ailments O through R.