Bawk to the Future: A Century of Americans Keeping Chickens

Here's a look at the ups and downs of chicken-keeping in the past 100 years, the practices and perceptions of having chickens in the U.S. 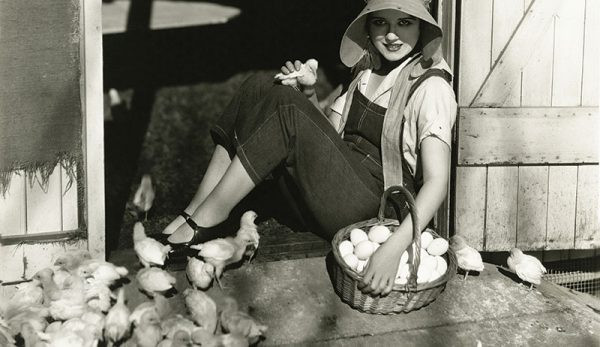 In a recent interview, actress Jennifer Garner said that she recently received baby chickens and remarked on how tiny and cute they are. She is raising them as a folly to have a few beautiful colored eggs around the house, but as a child, it was a different scenario.

ŌĆ£My mom said we would have 100 chicks arrive in the mail at a time,ŌĆØ Garner said in the interview. While her mom raised chickens for the necessity of feeding her family from their eggs and meat, Garner now enjoys them primarily as pets. ŌĆ£Just to think (that) in one generation, for me, itŌĆÖs ŌĆśI live in L.A. and arenŌĆÖt I cute and I am organic,ŌĆÖ and for my mom, it was just food.ŌĆØ

GarnerŌĆÖs chickens have names; her motherŌĆÖs chickens did not. And that is only in one generation. If we go back 100 years, a 1918 government poster declared: ŌĆ£Uncle Sam Expects You To Keep Hens and Raise Chickens.ŌĆØ LetŌĆÖs take a look at some other ways the hobby of keeping chickens has changed in the past century.

In Art and Science in Breeding: Creating better chickens, author Margaret Derry says that with the invention and modification of the incubator, there were 250 hatcheries by 1918. Nine years later, there were more than 10,000. Today, poultry hatcheries are a multibillion-dollar industry. Because of competition and the ability to provide chickens almost year-round, chicks were inexpensive. Hatcheries also vied to have the finest birds.

Around this time, it took the birds 16 weeks to reach a frying weight of 2 pounds. Today, a Cornish cross can reach 4 pounds in just six to eight weeks. In 1922, vitamin D was discovered, which aided in keeping the birds healthy throughout the winter.

Until the mid-1920s, raising chickens was thought to be the work of a farmerŌĆÖs wife. Agricultural experts in the Midwest told farmers to focus on corn, cattle, hogs and wheat. They didnŌĆÖt believe that chickensŌĆöthat were being fed for free via food scraps and free-ranging and providing free labor, turning the soil, fertilizingŌĆöcould be a major revenue earner.

The Delmarva PeninsulaŌĆöeast of Chesapeake Bay on the East Coast, shared by Delaware, Maryland and VirginiaŌĆöat this time was a truck farming region. Truck farming is the practice of growing one or more vegetable crops on a large scale. This was a feast or famine operation and varied year to year, based on the weather and market. Farmers in this area were looking for a steadier source of income, and meat chickens were the answer.

Up until this time, chicken meat was a byproduct of the egg production. Old birds became dinner. Farmers started focusing on single-purpose chickens, either layers or meat birds, as their production was more efficient than the average production of dual-purpose breeds. Delmarva Peninsula became the birthplace of the broiler we know today.

Chicken nutrition came to the forefront as farming became more specialized. More farms kept larger flocks of chickens, which could not source enough food on their own. Feed companiesŌĆÖ filled the void. In 1933, it took 6 1Ōüä2 pounds of feed to produce 1 pound of broiler meat. In 1943, it took 4.

Today, because of breeding and better feed formulas, it takes less than 2 pounds to produce 1 pound of meat. This was a big step forward for the progress of chicken keeping.

Prior to the 1930s, people eating chicken would often butcher and prepare their own birds. For the elite, starting in 1902, chickens were ŌĆ£New York dressed,ŌĆØ a process where the birds are rough plucked and blood drawn, costing between 15 and 23 cents per pound. Many ducks and chickens are still sold this way in Asian markets.

According to the May 1943 issue of Popular Mechanics, Americans grew 18 million victory gardensŌĆö12 million in cities and 6 million on farms. Many of them included chickens.

When World War II ended in 1945, the government promotion of victory gardens stopped. The majority of Americans didnŌĆÖt plant a garden in the spring of 1946, and the demise of backyard chicken-keeping and homesteading began.

Following the war, the modern era began, and societal changes had far-reaching effects. Supermarkets replaced corner butcher shops, and many people traded the farm life for suburbia. The sprawl of the suburbs pushed the farmlands farther away from the cities, separating the farm from the table.

We became a mobile society with cars inhabiting every driveway. People could travel easier with the aid of the interstate highway system. Those who hung onto farm life in the suburbs soon realized that it was easier to purchase cellophane-wrapped chicken than to raise their own.

So many eggs were being produced that egg prices fell. Growers continued to raise more birds, which made the egg prices drop even further. Only companies with large flocks could compete. Companies started to mix antibiotics and growth hormones into the feed. Supermarket refrigeration systems allowed meat to be transported hundreds or thousands of miles. People grew accustomed to cheap eggs and meat, and backyard chickens continued to fall out of vogue.

Starting in the late ŌĆÖ60s, Frank Perdue used the rise of television commercials to turn chicken into a brand name. His homespun commercials made him a celebrity and made Perdue Farms the third largest poultry distributor in the country by the 1980s, according to Bulls, Bears, Boom, and Bust: A historical encyclopedia of American business concepts.

At the same time, Don Tyson began to make his fatherŌĆÖs small 1935-founded Arkansas poultry company into a worldwide business. In 2007, Tyson was listed by Forbes as one of the 1,000 richest people in the world. Today, Tyson Foods Inc. is the largest chicken company in the United States, according to Watt Global Media.

By the early 1980s, consumers favored cut-up and processed chickens to the traditional whole bird. Chicken tenders and other ready-to-eat frozen foods were invented. Rotisserie chicken, another convenience item, became a big hit.

Unfortunately, the ŌĆÖ90s were a low point in the poultry industry. The progress of chicken keeping reverted. Because of breeding and diet, many chickens experienced metabolic disorders and heart attacks, both associated with rapid growth.

With American consumers becoming more aware of the treatment of their food, they began to look for ways to take production back into their own hands.

In 1990, Martha Stewart launched Martha Stewart Living. In a few years, it grew to a monthly publication, highlighting homesteading tips such as raising chickens. In December 1994, HGTV launched and highlighted themes such as landscaping and gardening.

Although the term ŌĆ£organic farmingŌĆØ was coined in 1940 and the practice can be traced back to the 1800s, the organic movement began in this decade in response to industrial agricultureŌĆÖs shift toward nitrogen fertilizers and pesticides.

Although news organizations, such the Washington Post and New York Times, have published articles stating that raising backyard chickens is a growing trend, there are few studies to provide statistics on these flocks.

The Poultry Science Association recently published a survey from about 1,500 chicken owners nationwide. Most respondents owned fewer than 10 chickens and had kept chickens for less than five years. Major reasons for keeping chickens were as food for home use, gardening partners, pets or a combination of these. Not surprisingly, rural respondents had larger flocks.

Owners believed eggs and meat from their chickens were more nutritious, safer to consume and tasted better than store-bought products. They were also concerned about the health and welfare of their chickens, which didnŌĆÖt seem to be the case on commercial farms.

Thankfully, keeping chickens has never been fully removed from AmericaŌĆÖs consciousness. TheyŌĆÖve been a constant source of companionship as well as wholesome food. Today, some chickens in their McMansions have heated perches, swings, treats and beechwood nesting box curls so they can rest comfortably. Many hobbyists allow them to free-range, and some only feed organic.

I donŌĆÖt know whether all of that is necessary, but backyard chickens today compared with 100 years ago are doing very well. Many even have names. Feather Locklear and Hen Stefani, IŌĆÖm talking to you! As chicken keepers, it is our responsibility to keep the progress moving forward for the next 100 years.