Do you know the meaning of terms such as straight run, pip and zip, bloom, and hackle? Here's a starter kit of terms on chicken facts and physiology. 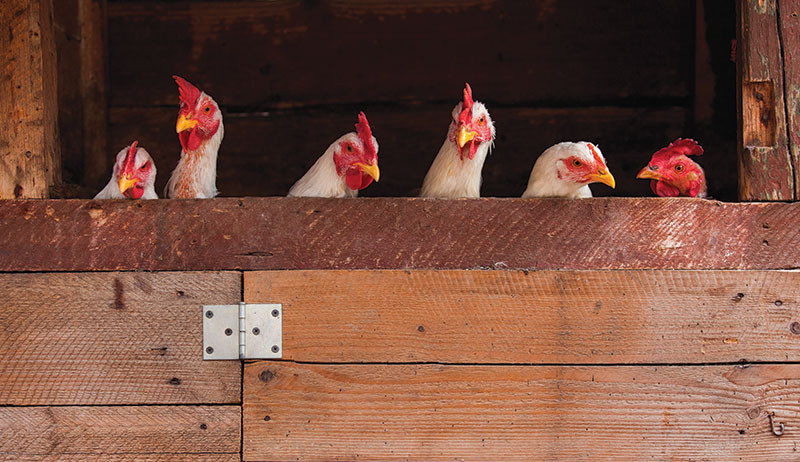 Do you know the chicken-keeping term “bloom?” Wait, let’s start with an analogy.

Remember that social acquaintance you’ve had for years? The one you continually run into at the market, gym, post office and hardware store? You know all about the person’s job, house, kids, vacation plans and weight-loss efforts. It seems you know everything—except the person’s name. Now it’s just too embarrassingly late to ask.

This is exactly the approach to chicken-keeping I hope you don’t take.

I know how crazy it gets during the first few weeks of keeping a flock. You scramble to get everything you discover you need but have yet to buy while continually inspecting your coop for potential predator access spots.

Hours go by as you try to entice your hens to lay their eggs in the nestbox you painstakingly built for them, but they keep going under the same shrub. You constantly refill feeders, clean (and clean and clean) waterers, and replace soiled litter—all while trying to capture every moment of the experience on camera.

I have news for you: the chaos never ends.

You can try to control it, but eventually you just get used to it. You’ll find that free time might suddenly be at a premium, and you’ll prefer to spend it with your loved ones or perhaps just catching up on chores or sleep. And suddenly, it’s years down the road and you still haven’t learned basic chicken jargon, just like you haven’t learned the name of that acquaintance you otherwise know so well.

Bloom is the reason we can keep fresh, unwashed eggs out on our kitchen counters. The bloom (also called the cuticle) is the protective coating that a hen deposits on an egg as it is laid. This sealant blocks the pores of the shell, protecting the interior from bacterial contamination.

The bloom also prevents strong smells from permeating the shell and tainting the flavor of the egg. Washing an egg removes the bloom, making proper refrigeration a necessity.

A 10-month-old boy chicken is as much of a cockerel as a 10-day old boy chick. These birds attain the term “rooster” once they reach that one-year mark. The same holds true for pullets. They are not called hens until they turn one year old, regardless of whether they are laying eggs.

While this sounds like a trait we’d want for all of our hens (“Our girls are bound to lay lots of eggs—they’re egg bound!”), in truth, the chicken-keeping term refers to a condition we wouldn’t wish on any of them. Egg binding occurs when the oviduct fails to pick up an egg yolk when the hen’s ovary releases it.

Instead of being laid externally, within a shell, the yolk is laid internally, inside the cavity of the hen’s body. Internally laid yolks are reabsorbed by the hen’s body, but only to a point.

If there are too many, the result is a mass of semi-cooked yolk gumming up the hen’s insides, encasing organs and causing her abdomen to painfully distend. Other than trying to ease a hen’s discomfort, there is no treatment for egg binding.

How can you tell a cockerel from a pullet? One lays eggs while the other crows, right? Well, sometimes it’s not that easy, especially if you have a pen of seemingly identical young birds and even more so if there’s more than one male in the bunch.

Subordinate males will not develop their combs and wattles as rosily and robustly as the dominant male, a physical manifestation of the pecking-order hierarchy. A young male chicken’s behavior might be so mild that he’s mistaken for a female.

How do you make certain the bird you’re selling as a pullet is not a cockerel? By its hackles.

The hackles are the feathers that grow lengthwise on the bird’s neck. A pullet’s hackle feathers tend to be wider and rounded, while a male’s hackles tend towards being thin, angular, and distinctly pointed. (Sebright and Campine males are the exception as their hackles are similar to those of a hen.) If you’re not sure whether you’re holding a boy or a girl, check the hackles.

While these might make cute names for a pair of baby chicks, Pip and Zip refer to the way a chick hatches.

Pipping refers to the chick’s initial hammering through its eggshell. Pipping can go very quickly or can drag on for hours. Both of these timeframes are perfectly normal.

Zipping refers to the circle a chick pecks around the circumference of its egg, creating a crack that allows it to “unzip” from the egg and emerge.

A purebred chicken is the chicken-keeping term for one that meets the strict criteria set for its variety and breed by the American Poultry Association. Bloodlines are carefully controlled by breeders in order to produce results that meet these Standards of Perfection.

Purebred birds tend to cost more than hybrid birds or mixed-breed birds. Depending on what your chicken-keeping niche is, you might want purebreds, mixed breeds or both. Don’t worry, the chickens don’t know that they are purebred or crossbred, so there won’t be any Harry Potter pureblood/mudblood clashes.

Yes, chickens have spurs and, no, they aren’t sharply pointed metal disks mounted onto tiny cowboy boots. Spurs are pointed outgrowths of a rooster’s leg bones, with one located on the inside of each leg.

Roosters use their spurs against predators to protect their flock and against threats, including humans and other roosters, in defense of their territory.

Spurs also help a rooster maintain his position on a hen’s back during mating. As a rooster grows older, his spurs grow longer, more curved, and harder. Because of this, many chicken owners look for ways to remove their boys’ spurs, not realizing how crucial spurs are in defense and breeding.

A run is the chicken-keeping term for an enclosure, typically attached to a chicken coop. It can be straight or it can have angles, depending on its design and how level the land is.

The straight-run label refers to baby chicks sold without having their gender identified. In other words, they are sold as if they’ve come straight from the hen’s nest. If you live in an area that prohibits you from owning roosters, do not buy straight-run chicks, because there’s as much chance of buying male chicks as females.

Babies have different nutritional requirements at different stages of their growth. The same holds true for baby chicks.

Chick starter is poultry feed specifically formulated to provide proper nutrition and protein levels (18 percent to 20 percent protein) for infant poultry from the time they hatch until they are approximately six weeks old.

Chick grower, with a lesser protein percentage (15 percent to 16 percent), is designed to feed young chickens from six weeks of age until they begin laying, typically when they are four months old.

For proper development and growth, offer your chickens poultry feed formulated for their specific age.

How does a hen lay eggs? Through her vent, which is the chicken-keeping term for the opening in her hindquarters where her reproductive tract ends.

How does a hen go to the bathroom? Through her vent, the opening in her hindquarters where her digestive and excretory systems end.

While these systems might share the same exit point, they arrive there via different routes, so there is no need to worry about your breakfast mingling with what your birds couldn’t digest.