Our Polish hen Sookie has some embarrassing roosting behaviors, and our neighbors don't really get why we have chickens. Things are improving, however. 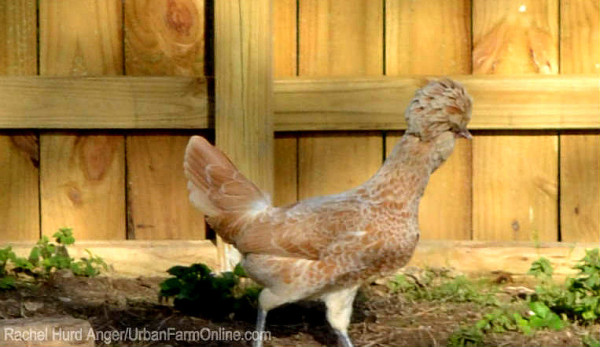 My husband was building our privacy fence when I was introducing my first flock to the great outdoors. That was four years agoâ€”when we knew the 4-foot-tall chain-link wasnâ€™t going to do the job of keeping our birds contained or safe from neighborhood dogs and other predators. At the time, I knew chickens could fly a little, but I didnâ€™t realize that some could fly better than others, especially the smaller chickens, like my Polish hen, Sookie.

In those early days of chicken keeping, our small yard didnâ€™t have a predator problem. In fact, we had almost no living visitors. Until I had raised garden beds, a thriving compost bin and chickens living in the yard, things were pretty barren back there. I rarely saw a bird, and I never saw a squirrel. The yard was boring and predictable, with nothing to lure me out the back door. It also had a rambunctious mosquito and tick problem. Before chickens, we went out back only to cut the grass.

Before chickens was also before predators. Once the fence was erected, the chickens free-ranged daily and often 24 hours a day. Two of them would snuggle together on top of the hose reel. Two others preferred to roost on the grill. Sookie made a habit of roosting on top of the privacy fence, about 20 feet from a neighborâ€™s kitchen window. 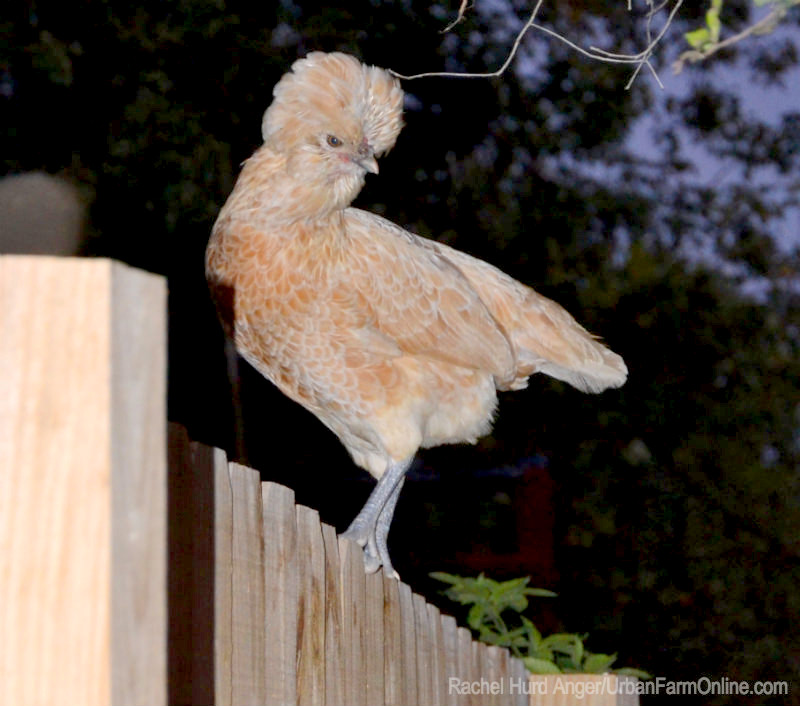 Because our yard felt isolated, we allowed the flock to be free at night. It was two years until a predator targeted our flock. One of our hens was attacked, but she survived. We moved to daytime ranging only.

Sookieâ€™s roosting behaviors were embarrassing. While Iâ€™m legally able to have chickens in my city, my house is in very close proximity to my neighborsâ€™ houses. Neighbors were suspect about our chickens from the get-go, so I always felt silly that my Polish roosted on the fence every night.

“Roosterâ€ť is Sookieâ€™s chosen duty in the flock, to be the lookout and the alarm system. In the mornings, after roosting through the night, she would walk the top of the fence, clucking to wake the flock before flying down for breakfast. Itâ€™s been two more years since we started mandatory night lock-ups, so I thought Sookieâ€™s fence roosting days were over.

Yesterday, my 17-week-old pullets discovered a place in the yard where they could fly to see outside the yard. Sookie decided to show up the adolescent birds she loathes. In her endless pursuit to show the pullets her importance and dominance in the flock (which the old hens fully dismiss), Sookie flew the figurative coop and left the yard.

It happened at dusk while I was busy inside cooking dinnerâ€”before I had the chance to button up the coop for the night. The doorbell rang, and our neighbor was on our porch. She said there was a chicken on her grill.

It wasnâ€™t a dinner invitation. There was a dumb blond bird with big hair roosting on her grill.

My husband followed our neighbor to her backyard, tossed Sookie over the fence, and I went out back to pop Sookie inside. I could hear my husband and our neighbor talking chicken on the other side of the fence.

Two years ago, our neighbor was still angry when Sookie would get into her yard, but last night she was laughing about tossing Sookie back over the fence next time with oven mitts.

As fun as it is raising chickens, our neighbors donâ€™t usually understand us. Whether we know it or not, we crazy chicken neighbors are normalizing raising food in our backyards, the way it used to be, long before many of our neighborhoods were built to keep up with the Joneses.

Like anything new, I suppose, chickens in the neighborhood just take some getting used to.